'Sister Act' the musical comedy based on the 1992 smash hit movie starring Whoopi Goldberg and Maggie Smith featuring original music by Alan Menken, dazzling dance routines and music inspired by Motown, soul and disco was brought to the stage by the Northern Youth Theatre Company at the Carriageworks, Leeds.

'Sister Act' is the story of a nightclub singer Deloris Van Cartier who witnesses a murder at the hands of her married lover and is taken under protective custody to hide in a convent. Here she learns life lessons and helps her 'Sister's' to find their voice and save their convent whilst Deloris finds friendship, meaning and her true self.

This company, of 42 young people were exuberant and brave, giving an energy to the show that only the young can. The show is the perfect vehicle for a group who are predominantly female, which is the case in most amateur productions. The use of set was very minimal in this staging with three movable flats and the occasional tables and chairs and moving panels, this maybe lacked the pizzazz of other productions however this did not detract from the dynamic performances given by the cast, who more than made up for it. I feel that the use of stage crew was unnecessary, as the set had so little impact on the show that any movements could have been done, without intrusion, by the cast themselves. 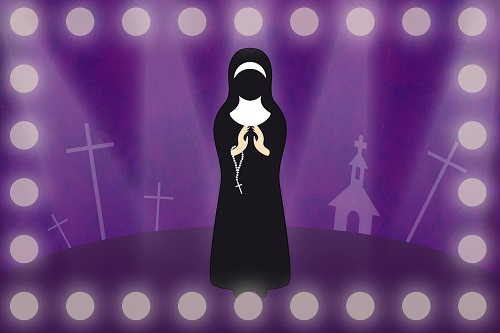 I attended the opening night of the show and thoroughly witnessed the youngsters enjoying themselves up there on stage. It was warming to see the volume of teenagers really engaging with musical theatre and this bodes well for the future. In the lead role of Delores Von Cartier, played by Beth Henderson-Clark, first night nerves were nowhere to be found and Beth delivered a performance way above her years, self-assured, sassy and in total command, this young lady radiates confidence and has a great voice for this role. Her beautiful soulful tones were perfect, I particularly enjoyed her rendition of 'Sister Act' as the real Deloris was awakened. In fact from her opening number, I was impressed, this girl is one to watch. I did find the wig a little large, as I was unable to see her face in profile.

The female ensemble was vast and heavily used in the show to good effect and the choreography was simple but entertaining. The strength of this show was the singing and the iconic 'Raise Your Voice', was very well sung, the young cast made a difficult vocal number appear easy and spontaneous, well done! I have to make a special mention of Chelsea Page who gave a comedic and entertaining performance as the ditsy, over enthusiastic Sister Mary Patrick, her vocal harmony work was a delight. Both Sister Mary Lazarus (Sadie Yeadon) and Mother Superior (Talia Monnickendom) also gave accomplished, convincing performances. However, Lucy Sherman in the role of Sister Mary Robert was the stand out performer of the night. Such a young girl, her rendition of 'The Life I Never Led' has to be one of the strongest I have seen from any age range. I will be keeping a close eye on this girl has she has a big future and I am sure we will hearing much more from her!

The male cast in this show is small but they were not to be outdone by the girls. Sterling performances from Jack Swarbrick as Sweaty Eddie and Ellis Kirk as Curtis. Both these young men were convincing in character and had lovely voices that will only strengthen in the future. I have never seen a Monsignor O'Hara portrayed as the 'comedic glue' that holds the show together, but I did tonight in Oliver Kemplay's entertaining performance. This really worked and his Bronx accent added to the persona. It was really refreshing to see something new and I applaud this young man.

The band under the direction of Jacob Savage sounded great, if a little too loud at times, disappointingly drowning the vocalists. Unfortunately, there were several 'mishaps' with sound throughout the opening night which were very distracting. Characters dialogue was missed due to late mic cues and sound levels from the band made it very difficult to hear the lyrics in the songs, this was a great shame as the cast had obviously worked very hard but, I am sure these teething problems will be ironed out for the next performance. The staging of the production seemed to falter in its flow and lacked direction in certain scenes and transitions. Unequivocally I can state, the strength of this production was the talent and bravery of these young people and their collective performances were strong enough to shoulder these hiccups.

Well done the cast of 'Sister Act' you embodied the fun and the joy of the production with great gusto and I hope you see you again as you continue to perform in the future.

Sister Act plays at The Carriageworks until Saturday https://www.carriageworkstheatre.co.uk/whats-on/musical/sister-act/2380