The Solana Resort, Benidorm is brought to life on stage after ten successfully commissioned series on TV. The stage show as with the original series is skilfully written by Derren Litten and directed by Ed Curtis. Mark Walter's set is exquisite and never obtrusive, as we see the facade of the Solana Resort Hotel that is transformed into the pool area, the reception and Neptune Bar seamlessly. Clever choreography by Alan Harding adds to the pastiche as caricature dance during scene changes become integral storytelling rather than mere masking.

Following the Series; a British favourite for the past decade; Benidorm Live has six of its regular performers Jake Canuso as the womanising and lecherous Spanish waiter Mateo; Janine Duvitski as the swinging Jacqueline; Adam Gillen as the hilariously naive hairdresser Liam; Sherrie Hewson as the hotel manager Joyce Temple-Savage, Shelley Longworth as Sam and Tony Maudsley as the outlandish hairdresser at the 'Blow 'n' Go', Kenneth. 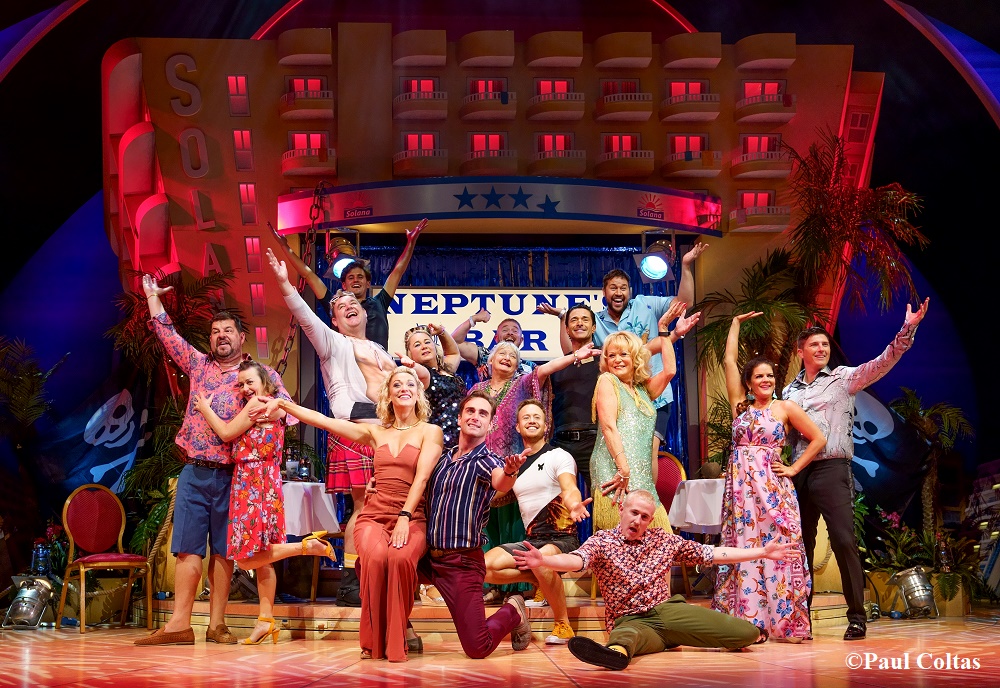 Each of the above were cheered on their initial entrance to the stage proving that the audience were predominately hardened fans. Gillen stole the night for me as the audience reactions ranged from incredulous to sympathy, he had us eating out of his hand with his physical humour. Canuso delivered a very enticing Flamenco, displaying his roots as a dancer at the start of his career.

As the story unfolds and the gags come thick and fast, we are introduced to several additional characters including Tricia Adele-Turner as Sophie the 'posh' and 'bitchy' holiday maker who lands at the Solana hotel with her long suffering husband Ben played by Bradley Clarkson, after their chosen hotel in Altea is over booked. The staff are convinced that the couple are the undercover Hotel Inspectors. Next Damian Williams as Derek 'the gay' is the suspect, Will Jennings plays the non-English speaking waiter who turns out to be the planted Hotel inspector and disaster is averted as he falls in love with Sam and asks for her hand in marriage. Asa Elliott plays himself and provides the 70's and 80's musical backdrop as Neptune Bar's resident singer of the Brits abroad romp. The story is reminiscent of a Fawlty Towers episode.

Yes, this show is lewd, it is rude and it is crude but it is hilariously funny. Full of innuendo, pun and double entendre, the humour is British and pushed the limits of what is comfortable, yet it doesn't over step the line with the funny, yet filthy, jokes. Although the gags are typical British 'postcard' humour they are universal, my American friend joined me at the show and guffawed as loudly as I did. The humour has a naivety and an innocence of a bygone era and the costumes reflect this. The show is slickly executed and had me laughing uncontrollably on many, many occasions. It was a perfect length and commanded the audience throughout. A cracking night’s entertainment without a complaint of an 'ism' in sight!