The third and final production this year from The Manchester School of Theatre took us to Donegal, and the small loch-side town of Buncrana during the Second World War. More specifically to the kitchen of a beach-side house owned by the West family.

On entering the auditorium, the first thing that strikes you, in fact the only thing to strike you, is the magnificence of the set. Designed by Olivia Du Monceau, this was absolutely lovely. A wooden house with the kitchen open to the audience, and the beach and sand around. It was the attention to detail though which truly impressed.

It would be true to say I knew nothing of either play or playwright beforehand, and therefore had no idea what to expect, not even that the play was set in the writer's own neck of the woods; but the play held my attention and despite the lack of 'action', I actually really enjoyed it. I might be completely wrong here, but the play did remind me in some ways of the writings of Anton Chekov - a family drama in a claustrophobic situation with war in the distance and everyone longing to travel elsewhere, using a stranger's presence to diffuse the tension, and being able to find joy, even humour, in tragedy.

However, back to McGuinness. And I have to say, despite some fine acting and directing, I did have some problems with the writing. I simply found it impossible to believe that a young man in the US army would be allowed to wear rouge and lipstick, and would have been able to be as open and so obviously gay; two men would not be seen hugging and kissing together, and the family would not allow it nor would they condone it. I also cannot believe that so much swearing went on in front of the women or by the women either. Therefore, the author is asking us to suspend our disbelief a little too far, if he wanted to create an authentic feel to family life in that part of Ireland in 1943. The plot was extremely contrived and very convenient. All the men came home from the war unscathed (practically), and everything got tied up nicely and happily with a pink little ribbon at the end. But of course, that's the plot, that's the play; now let's look at the actors.

The title role of Dolly West was played with realism, naturalism, truth and sincerity by Elaine McNicol. McNicol was playing a character much older than her tender twenty-something years, and yet she didn't need to fall into the trap of caricature or gimmick, she just simply was, and we believed it wholeheartedly. Dolly's mother, Rima, however, did need to rely on stereotypical caricature to a certain extent since, Brogan Bailey, again in her early twenties was being asked to play a feisty, unconventional elderly lady on the cusp of death. It was an exceedingly difficult ask, but Brogan rose to the challenge superbly, and despite the reliance on gimmick and caricature, she still brought much to the part that wasn't and we bought into her sterling portrayal. Dolly's more straight-laced and conventional sister Esther was played here by Jasmine Parkin, again giving a truly excellent portrayal. The last female in the play is a young girl who works for the West's as a maid, Anna, and although old enough to fall in love with and even marry her US army heartthrob visitor, she is still young enough to be disgusted by and giggle at 'oldies' canoodling. Sensibly portrayed here by Sarah Day-Smith, she hides her difficult and even at that time shameful upbringing well, and her very girlish constant changes in mood were excellently measured.

The male roles were taken by Jacob Kendal playing Dolly's brother, Justin. After joining the army, Justin has become extremely nationalistic and is seen to hate the presence of English and American soldiers in Ireland. He has issues and he has anger, and finds a way of relieving all of this once he starts an affair with one of the US army who comes to visit. The only other Irish national was Ned, Esther's husband, also in the Irish army, played by Callum James. James was also the only one to be having some difficulty with the accent sadly, since his was a very sympathetic and real portrayal, it was such a shame that his accent wasn't up for the challenge. Tall, awkward, slightly aristocratic, and with a latent debonair je ne sais quoi, English adventurer Alec Redding was played with ease and style by Matthew Gee. And his recollecting of his time in action towards the end of the play brought a new and realistic dimension to both his character and the play.

The two American visitors to Buncrana, two young GIs under Redding's command in the Barrack's in Derry, were Marco Delavicario, an openly homosexual flirt who finds love with Justin, and Marco's Irish-American cousin Jamie, who falls in love with Ned's wife and Dolly's sister, Esther, but ends up taking second best with the housemaid.

The play was directed with love by David Salter. It was abundantly clear that Salter loved this piece, as he brought out the absolute best from all the cast, set, lighting and sound to create a highly entertaining and captivating piece of pre TV-Soap, 'theatrical soap opera'. I don't think I would necessarily rush to see any more plays by McGuinness, but I can't wait to see what 2017 brings for The Manchester School Of Theatre! Congratulations once again. 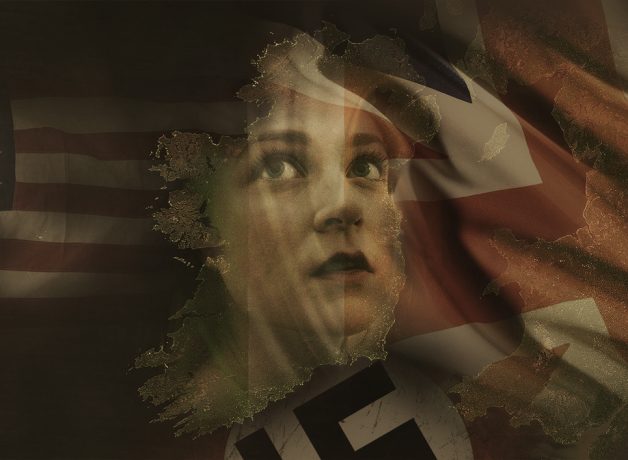