Anton Chekhov’s Uncle Vanya is part of HOME’s major new season celebrating 100 years since the Russian Revolution. This Russian classic was written 20 years before the revolution and it serves as strong evidence that the tendrils of poverty were choking the poor while a disillusioned upper class tried to maintain and justify their excess.

Steffi Wurster’s set is stark, practical and damp runs down the peeling wallpaper of the house where a fragmented family stews in their own politics and affairs. Chekhov’s affectation for exploring these bleak, naturalistic and early modernist ideas in people means this play relies on tension and layers of each characters feelings towards the others rather than action.

Uncle Vanya centres around a retired and irritable professor and his beautiful young wife Yelena who own the estate where the action plays out. Uncle Vanya is the professor’s brother in law from his first marriage and his family’s routine is turned upside down for a summer while the couple stay with them. 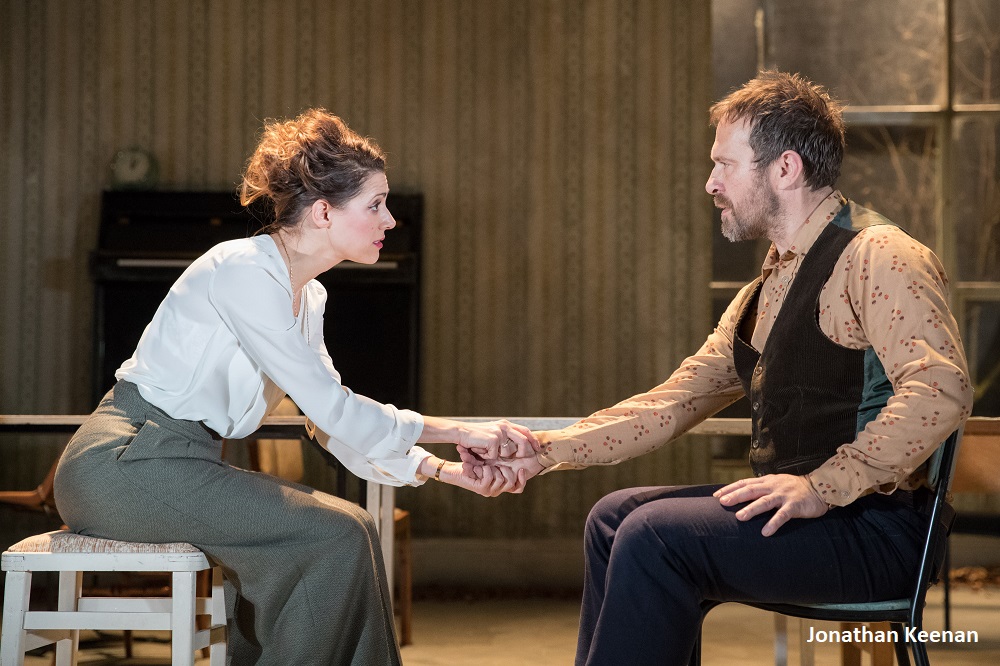 One common theme in the script is unrequited love, which simmers throughout and is frustratingly never resolved. As Vanya and local Dr Astrov fall in love with Yelena, Vanya’s Neice Sonya, played expertly by Katie West, suffers with her love for Astrov. The tension builds all the way through the first act and we are rewarded with one stolen kiss between Yelena and Astrov in act two but nothing more. It’s an unsatisfying and stifling piece.

Walter Meierjohann’s direction teases out the necessary comic relief through some drunken scenes with Vanya and Astrov played by Emmerdale’s Jason Merrells. Astrov’s eco-warrior passion to save forests too provides some modern day relatability from the stifling tension and drab non-happenings on the estate.

The sound and music too are quite stunning additions to this adaptation. A self-playing piano stays onstage throughout and plays pieces inspired by 19th and 20th Century instrumental Russian music that are translated into much more stripped back scores that suit the minimal nature of the performance. The music can be eerie and seems to tease the characters with its musicality and creativity, something severely lacking from their lives.

Uncle Vanya is a strong opener to HOME’s new season and the Russian Revolution provides a good backdrop to our cold November in Manchester. The production itself is very beautiful and it’s worth going to see if you, like Vanya, are ready for change and revolution.