Bebington Dramatic Society has been performing at the Gladstone Theatre since 1924. Their production of “Gaslight” gave us some chills and thrills, as well as a few laughs. Patrick Hamilton’s “Victorian thriller” gave rise to the term “gas-lighting” to describe the psychological, coercive control of one person on another. Although written in the thirties, this is an issue that is still relevant today.

We are transported to an elegant, period drawing room in a fog-bound London of the 1880s. The red velvet chaise-long making a statement against the ornate red façade of the proscenium arch. Mr and Mrs Manningham are in a domestic setting, but we soon learn that all in not bliss in this household. Bella (Danielle Jones) is nervous and on-edge. The suave Jack Manningham (Jonathan McGrath) although calm, is over-bearing and controlling. He accuses his wife of losing things all over the house. He is playing with her mind: convincing the fragile woman that she is going mad. She has moments of fear; moments of hysteria. 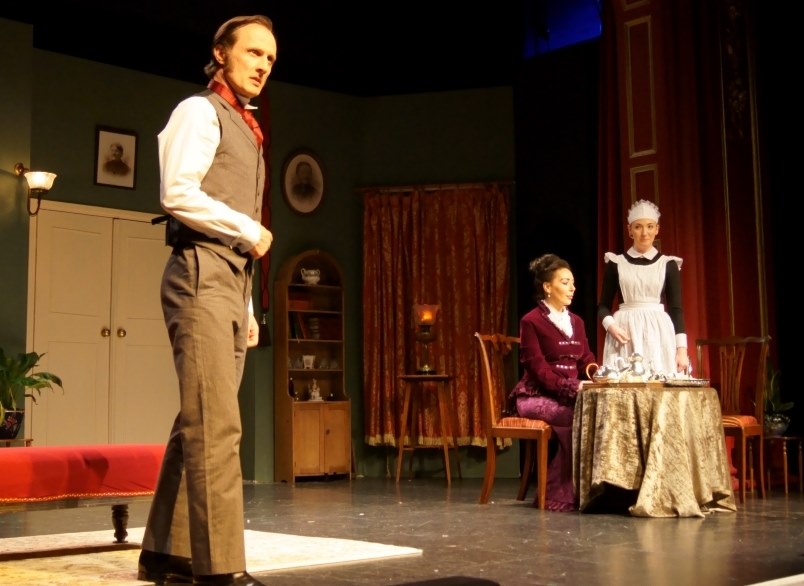 This first scene sets the tone but at times the pace was a little slow and although Manningham is seen to be a “nasty piece of work”, we aren’t convinced yet of his true menace. He leaves his wife as he does every evening and a visitor, Police Detective Rough (David Oliver), suddenly brings some pace and energy on to the stage. He is a jovial man with some whimsical lines, even though his purpose is of the most serious kind. He believes Jack Manningham is really Sydney Power- the murderer of a previous occupant. Rough convinces Bella she must help him expose her husband. There was a great dynamic between these two characters. Bella’s nervousness was convincing, as was Rough’s caring nature and clever-reasoning. The little whiskey moments gave us all a giggle!

Bella tells him that she hears footsteps on the upper floor and when this happens the gaslight dims. The stage gas lamps were very effective. Rough believes Jack is up there searching for something. Helping with their under-cover guise is the housekeeper Elizabeth (Caroline Kay) who already has the measure of Manningham and is loyal to her mistress. On the hand, the cheeky and flirtatious maid Nancy (Rosabelle Bennett) is after the master for herself. These two cameo parts were both well played, giving us a good contrast in the servants.

Manningham returns and after a passionate episode with Nancy, he realises his desk has been tampered with. His viciousness rising, he becomes threatening and violent toward his wife. Here, McGrath gave us moments of real tension and power, but they could have pushed us even more to the edge of our seats. Still, we were eager to know if Rough would prove Manningham’s guilt and Bella would finally be free of her over-powering husband. A dramatic final scene would reveal all!

The direction was confident, although those chilling moments could have been prolonged. Perhaps some of the subtleties in the psychological torment were lost on the large stage. The use of an eerie soundscape could have added to the mood. The writing desk, which plays quite a significant role in the plot, was placed upstage, where we lost a lot of the actors’ facial expressions and reactions.

The strong, capable cast turned in a fine performance. This production highlighted more of the murder mystery, than the psychological thriller but nevertheless was both entertaining and engrossing. It runs until Saturday and is well worth a watch.