Directed by Si Foster, Harry Moore and Sophia Thow, the Theatre Royal’s Youth Company, RTDA, perform an annual musical each year in August, with this year’s show being The Sound of Music. Having watched this youth company for a number of years I was both excited, and unsure, of what to expect of such an ambitious Rodgers and Hammerstein show being performed by a group of children and young people.

The story is well known, set in Saltzburg Austria in 1938 and based on the true life experience of the Von Trappe Family who escaped Austria at the start of World War 2, it tells the story of Maria, a young postulant nun who takes a job as a governess to the Von Trappe Family and immortalised in the 1965 Film featuring Julie Andrews and Christopher Plummer.

The show was the full version of 2 and a half hours (including interval), and included all the well-loved songs from the film and musical. These included ‘Edelweiss’, ‘My favourite things’, The Sound of Music’, ‘Climb Ev’ry Mountain’ and ‘Do-Re-Mi’ to name a few. The singing was performed to a backing track but his didn’t detract from the high standard of the singing throughout the many numbers within the show. 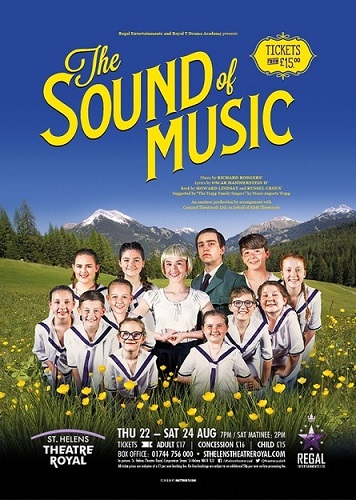 There was a particularly strong cast with Jack Blackburn playing the regimented and aloof Captain Georg Von Trappe.

Caitlin Bolton played Mother Abbess and her stunning rendition of ‘Climb Ev’ry Mountain’ was memorable, with strong vocals from the remaining ensemble of nuns, including Izzy Watkins whose voice shone through in the group numbers.

The two outstanding performances go to Liv Forshaw as the irrepressible Maria Rainer, who wins over not only the children within her care but their father also. Liv’s singing throughout was of a high standard and her interpretation of Maria was spot on, as she developed the character from a naïve young governess to a more refined wife and mother.

The other outstanding performance was Roisin Cook as Captain Von Trappe’s love interest, the sophisticated and glamourous Fr Baroness Elsa Schräder. Roisin epitomised class as she sang and danced several numbers and looked every inch the millionaires that she portrayed.

Comedic relief was provided by Elliott Bailey, whose comic timing was impeccable as Captain Von Trappe’s best friend Max Detweiler, and giggles could be heard throughout the theatre throughout Bailey’s performance.

No review of the Sound of Music would be complete without the Von Trappe Children, all of whom were absolutely delightful with strong and energetic performances from all, each perfecting the individual personality of the characters they played. The overall effect being that of a cohesive and organised unit. Special mention goes to the adorable ‘Gretl’ who was super cute with a voice to match, making her a star in the making.

The dance numbers were choreographed by Jade Harrington and was perfectly performed by the young company, from the Von Trappe Children’s pieces; the waltz at the party scene and the dancing marionettes for ‘The Lonely Goatherd’ scene, it all flowed throughout the show and allowed the young ensemble members to have an active role in the show.

There were a number of set changes, of which the set were basic but effective. The costumes were flawless from the uniforms of the children through to the glitz of the party scene. Both of these helped to set the scene and provide believability transporting the audience back to 1930s Austria.

All in all the Sound of Music was impressive by anyone’s standards, and all the more when realising that the cast entirely comprised of children and young adults. Well done everyone. The show dates are 22nd – 24th August and definitely well worth a watch. http://www.sthelenstheatreroyal.com/show/?show_id=873608972