So, this is not my first time seeing Joseph – in fact, you may say I like it a lot.  From my first ever professional performance starring Jason Donovan at the fragile age of 15, I have enjoyed many a society’s take on it...  However, this evening, I was lost for words to describe it but here are just 3 - brilliant, marvellous, spectacular...

Joe McElderry excels in the lead role and was quite simply made for it...  His vocals surpassed any I’ve seen previously (maybe Jason aside {wink, wink}) and his cheeky nature won the audience over very quickly. His acting abilities were fantastic and you completely believed in everything he did... The final notes of his performance of “Close Every Door”, gave me goose bumps and were in one word SUBLIME. He is most definitely, Joseph.

The narrator, an extremely hard sing, was played by Lucy Kay and she complemented McElderry well. I think there were possibly some nerves in there to begin with but she soon ironed them out and performed some wonderful, well known sections within this fabulous score.

Now, those who know me well will know my slight obsession with Elvis and I know that this is supposed to be the comedy element of the production, but I take this particular part very seriously and oh boy, Ben James-Ellis did not disappoint... He was superb, from the lip curl to the pelvic motions and leg ‘shakes’, he had it all including the vocals to go with it..  Not only did he ‘wow’ with the usual “Stone the Crows” and “Song of the king” but also gave us a fantastic performance of “King Of My Heart”, an extra song written by Tim Rice and Andrew Lloyd Webber and added in to the show in time for the 2007 UK tour giving James-Ellis a little more time in the spotlight which he so richly deserved.

The brothers are too many to mention but each gave his own strength and character to the roles and their ability to dance (some very energetic movement) and sing at the same time left me a little breathless just watching.. Superb vocals by all and the harmonies created were stunning.

I have to mention Henry Metcalfe who played Jacob and Potiphar – not only did he take on two roles and fulfil them well but actually choreographed the whole piece and may I say, spectacularly..  The routines were energetic, fun, thrilling and just to die for...  The three female dancers were excellent and all played their many various roles with ease. I particularly enjoyed the ‘hoe down’ in “One More Angel in Heaven” and the tango in “Those Canaan Days” was just phenomenal (congratulations to the Tango couple {I’m afraid I couldn’t work out, from the programme who they were} it was danced magnificently) 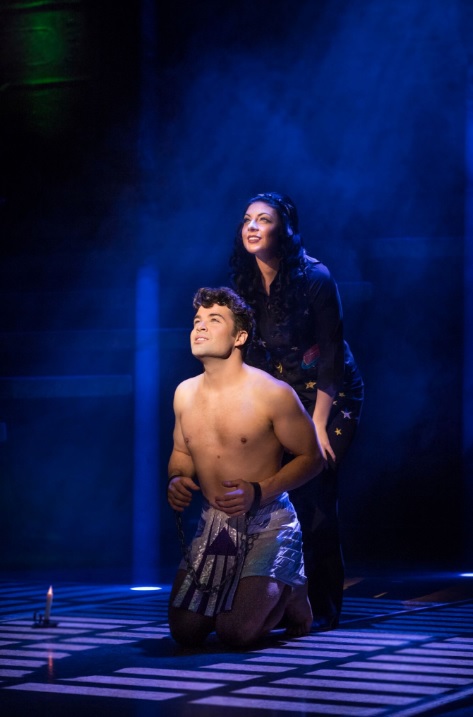 This amazing company was accompanied by an excellent orchestra under the guidance of Musical Director, Richard Morris and I am thrilled to say that all vocals could be heard and the orchestra never once outshone the performers (although the overture was something quite breathtaking with a little audience participation when we were encouraged by Morris, to clap along).  A fantastic sound Richard, well done.  The vocals were added to, by the Michael Hall Theatre School choir who sat patiently (on stage all through) and sang beautifully all night and impressed with their opening of Act Two.

Sound and lighting were on target all night with no issues to report – superb work for an opening night..  Congrats guys.

Costumes really were a sight to behold... The colours and fabrics were out of this world with some extremely quick changes for the three young dancers and some very clever on-stage changes.

The set was superb and very lavish... The camels were adequate for what was needed and the ‘chariot’ was a clever way of bringing the show forward slightly although, I would have like to see it run (won’t spoil it for people yet to see it)

I am not surprised that this is Bill Kenwright production – it was slick, creative, fun and energetic and truly left you wanting more.  He certainly has a winning team on his hands and with McElderry as his Joseph, he cannot lose.

I urge you to go and see this show-stopping, toe-tapping mega-mix (see what I did there) of a musical when it comes to a town near you...  Enjoy your tour guys, you really do deserve the praise...  GO GO GO JOSEPH!!!!