This is billed as “true crime... Paranormal horror... Conspiracy theory... This might be the most disturbing "play" you see this year.” Probably only the last part of that statement is totally true.

The show opens with a chilling scream, followed by horror movie-style organ music. A screen shows images of the atomic tests at White Sands, split atoms, mushroom clouds, then marching Nazis and footage of refugees, then Bowie, scenes from the cult classic Twin Peaks, owls, animals… It is bizarre, unconnected, unsettling, disturbing, seemingly random… or is it? My mind was struggling to find some order, make sense, make connections that probably weren’t there. A narrative voice over begins, telling the tale of the Pied Piper. Again seemingly random. Again – is it?

The hosts finally come out and introduced themselves, with the unlikely names of Arthur and Harold, played by Jonathan Curd and Kiran Tanna. The show takes the form of a live podcast presentation. They are confident and credible hosts, presenting their horror show, which is akin to a mystery or true crime programme. 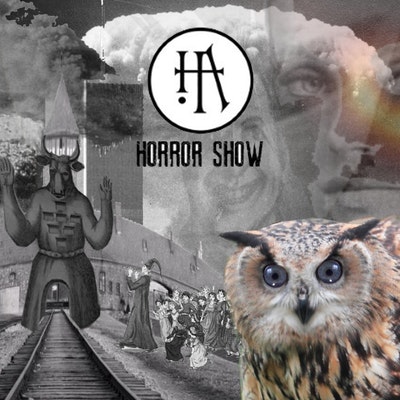 It’s difficult to say what this actually is, or what it’s trying to be, as it’s many things, but the defining description is almost certainly black comedy. Very black. Like proper art it makes you think. It makes you question the boundaries of bad taste and acceptability. Several times the content tiptoes the thin tightrope between the two, and – many times for some people – I think it’s fair to say, it plummets over. The horrors of the holocaust are flippantly discussed alongside the theory of a hollow Earth and giant bird creatures that live there. It sometimes feels that they are challenging you to laugh if you dare.

The photographic presentation which accompanies their talk is fascinating, often funny and sometimes harrowing; as with everything about this show, it is polarised and polarising.

The hosts jump from talking about Nazis and UFOs to discussing missing people and several cases are documented. It all becomes very serious and very compelling and suddenly seems far removed from the Fortean Times-type nonsense that they started out with. It is very interesting and captivates the audience.

The show is punctuated by “ad-breaks”, supposedly at their corporate sponsor’s insistence, which allows them to show snippets of film, which are very loosely adverts, but are bizarre and quite horrific, featuring images such as someone being kidnapped and tortured with an electric drill, or a man with four eyes. The stuff of nightmares.

After an ad-break, Arthur comes out alone to relate a strange experience he had. The stage and the theatre itself is eerily lit, in near-darkness, while outside it is probably still sunny; it is disorientating, like being in a deprivation tank. It feels much later, it feels like midnight, the witching hour and all that that entails. I mostly loved this section, because of the intense atmosphere that was created, with the addition of subtle sound effects, weird static and odd undulating sounds creating an aural backdrop. Arthur conveys a real sense of fear and was very effective at cranking up the tension, but this is rather squandered as the narrative is overlong and by the conclusion it seems to lack purpose.

Harold then tells his own spooky story, which is shorter, peppered with humour, but also seems somewhat obtuse by the end.

As the show has now finished its single night run at the Greater Manchester Fringe festival, it can’t hurt to spoil the ending. Except there isn’t one. Not a neat, narrative ending anyway. A fake fire alarm goes off and Harold and Arthur announce the show is over and everyone can go home. The audience don’t stir, awaiting a punchline or a suitable conclusion. There is no finale, they insist. There is no big finish, no song and dance routine. That’s it. They start tidying the stage. Eventually, the first brave but uncertain member of the audience stands up and makes for the exit. With some hesitation, everyone else tags along and shuffles away, confused, bemused and possibly slightly disturbed.

As we’re going down the stairs, I overheard the couple in front of me saying: “What did you think?”

That summed up the experience for me. But they almost probably talked about it all the way home. And sometimes that’s the point: to shock, to make people wake up, to make people question something…. Or anything.

I feel this had huge, HUGE potential in many places. The actors are good, their comedy timing is good, and they convey a realistic sense of presenter-like faux-earnestness. While it is certainly sometimes horrific and definitely sometimes amusing, it’s an odd entity, made of disparate pieces. What I really like about the show is that it fired up my imagination and kept me wondering. Twenty-four hours later I’m still rather captivated by it, for which it earns its fourth star.

Despite the confusion in the audience, I have a nagging feeling that these two young Yorkshiremen know exactly what their show is all about and it is exactly how and what they want it to be.