After having played to full houses and with over two million tickets sold for its superb versions of murder mysteries penned by the 'Queen of Crime Fiction' over the last decade, The Agatha Christie Theatre Company is dead. But never fear, in its place Bill Kenwright has created The Classic Thriller Theatre Company to continue in the same vein but with the shackles off when it comes to productions as it tours classic murder mysteries from a range of authors.

Rehearsal for Murder is their debut production of a murder mystery television film written by Richard Levinson and William Link, the duo behind 'Murder, She Wrote' and 'Columbo', and which won a 1983 Edgar Award from the Mystery Writers of America. Adapted for the stage by David Rogers, the location for our purposes has been transferred from Broadway to London's West End.

A playwright, Alex Dennison (Robert Daws), is struggling to come to terms with the apparent suicide of his fiancée and leading lady, Monica Welles (Amy Robbins), some 12 months ago following the opening night of his play which met with mixed reviews. Convinced that foul play was at hand, on the anniversary of that ill-fated night, he has assembled the same cast and crew in the theatre for a reading of his new play, a mystery in which a famous actress is killed. As it progresses it is clear that the scenes bear an uncanny and uncomfortable resemblance to events which may have unfolded between each of them and the departed Robbins.

The play initially sets the scene of events from 12 months ago as Daws recalls that evening for his new assistant, Sally Bean (Holly Ellis) as they set up the theatre for the readings of the new play with the assistance of the caretaker, Ernie (Martin Carroll). It also serves to introduce us to the cast which includes established thespian and lothario David Mathews (Robert Duncan), up and coming starlet Karen Daniels (Lucy Dixon) and her estranged husband and erstwhile actor Leo Gibbs (Ben Nealon), and rounded off by love-struck director Lloyd Andrews (Steven Pinder) and theatre producer Bella Lamb (Susan Penhaligon). Detective Inspector McElroy (Mark Carter) concludes Daws' tragic recollection. 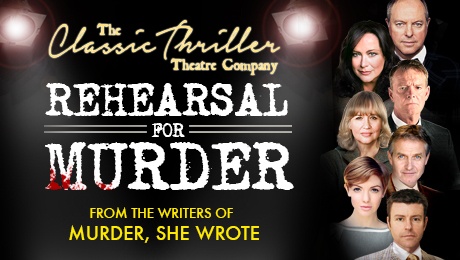 So back to the present and Dawes 'hides' his perfect foil, Frank Hiller (Gwynfor Jones) within the real audience as this play within a play commences. Each character is presented with a scene where they in effect playing themselves in an imagined flashback which allows the deceased Robbins to reappear and we are presented with motive for each character to have killed her. The question then is: who done it? Twist follows turn follows twist follows more turns as we are led a merry dance in the unravelling of the murderer through a cleverly deceptive script. The best compliment is that of audience members afterwards: 'I didn't see that coming.' I didn't either and nor will you.

There are witty and realistic references to the world of theatre and acting along with barely veiled digs at theatre critics and producers, all thoroughly deserved I'm sure, and offering good insight into what really goes on behind the scenes at the majority of productions we have come to know and love.

Roy Marsden's direction is superb, especially as this is an adaptation from television which can accommodate greater trickery than a theatre can offer, and as such we get to delight in fantastic performances from all of the cast. Bearing in mind that many of them are renowned television favourites, it is much to their credit that at no point during the play did that ever cross my mind. A special mention to Daws who is a constant throughout and whose role holds the whole thing together in what is a very demanding role with minimal let up and a lot of lines. The best compliment I can give is to note that when all is finally revealed I wanted to go straight back to the beginning to watch it all again. It really is that good.

Rehearsal for Murder plays at The Floral Pavilion, New Brighton through to Saturday 19th March 2016 before continuing its UK tour. Full details of other venues are available at www.kenwright.com.

A word on the venue: in its day New Brighton had seven theatres and was the place to go for live entertainment with top stars treading its boards from the 1890's through to the 1950's. Sadly thereafter, one by one, these fantastic venues shut their doors and in 2006 The Floral Pavilion Theatre faced a similar fate. Rebuilt in 2008 as part of a wider ambitious redevelopment and regeneration programme, it has become an icon to the power of live entertainment in uniting communities through culture. Full details of their exciting programme for 2016 can be found at www.floralpavilion.com