Tommy Steele Returns To The Beginning

As his legion of fans already know, Tommy Steele – Britain’s first Rock and Roll Star – made his legitimate debut in 1958 starring in Rodgers and Hammerstein’s Cinderella, which enjoyed a sold out run at the London Coliseum. What they probably don’t know is that the inspiration for Tommy’s extraordinary career was an American band leader whose music Tommy had worshipped from the moment he first heard it in his early teens…

And so, 60 years on, Tommy Steele returns to The London Coliseum to salute his idol Glenn Miller in a new musical celebration.

Glenn Miller was the best-selling recording artist in the world from 1939 to 1943, leading one of the best known big bands. In those four years he scored 23 number-one hits – more than Elvis Presley and The Beatles.

Tommy Steele landed his first UK number-one with Singing the Blues in January 1957, reaching the top spot before Elvis, the same year he filmed The Tommy Steele Story, one of Britain’s great rock ‘n’ roll movies. 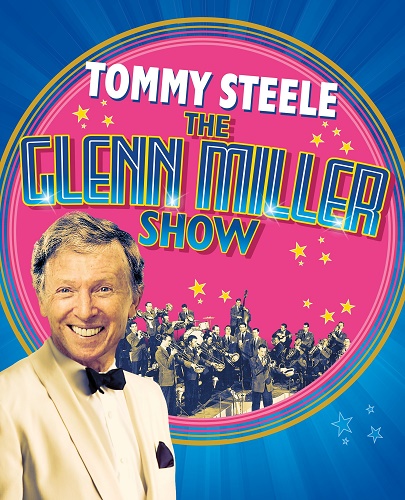 His career has included over twenty hit singles, twelve hit musical movies – including Finian’s Rainbow, The Happiest Millionaire, and of course Half A Sixpence – and countless award winning stage musicals such as Half A Sixpence, Hans Andersen and Singin’ in the Rain. Tommy starred in the musical Scrooge, which enjoyed two successful runs at the London Palladium, and made him the theatre’s all-time record breaking performer, having headlined more performances than any other star in its history.

The Glenn Miller Show features the journey the legendary big band leader took to find his unique sound, and his subsequent fame and untimely death. With the authentic sounds of In the Mood, Moonlight Serenade, Little Brown Jug, Pennsylvania 6-5000, Tuxedo Junction, Chattanooga Choo Choo, and many more era-defining favourites. It is produced by Bill Kenwright with choreography by Olivier Award Winner Bill Deamer and direction by Bob Tomson and Bill Kenwright.

Tommy said “I am and always will be one of Glenn Miller’s biggest fans. That sound, that wonderful sound, and his search for it, is one of the most inspiring stories I know. So, I’m returning to the Coliseum to say two thank yous!!”

Box Office: 020 7845 9300 | This email address is being protected from spambots. You need JavaScript enabled to view it.