Tonight saw the Junior Section from Sandiway Pantomime Group treat us to a multi- story show, which is a musical by Sue Gordon. Performed by youngsters aged between 9 and 14 this tale is a battle between Hans Christian Andersen and the Brothers Grimm. The Grimm’s accuse Hans of stealing their tales and just slightly changing them.

The show opens with the whole cast singing Never Ending Story. Unfortunately, the music played by Steve Salisbury and Graham Cawley was slightly loud and drowned out some nice voices throughout the show.

The cast lead by narrator Leah Barrow a very confident charismatic young lady, showed enthusiasm throughout. Watch out for the cheeky elf played by Sophie Grattidge another confident young lady.

Hans Christian Andersen is played by the talented Emily Cowen, and the housekeeper Mrs Ridge is played by Amy Jane Vaughan who also takes the roles of TV announcer and witch. The Brothers Grimm are played by Holly Salisbury and Lizzie Edwards and have some funny scenes throughout the show, they even treat the audience members to sweets late in the 1st act. Watch out for them in the 2nd act though when the super soaker comes out! 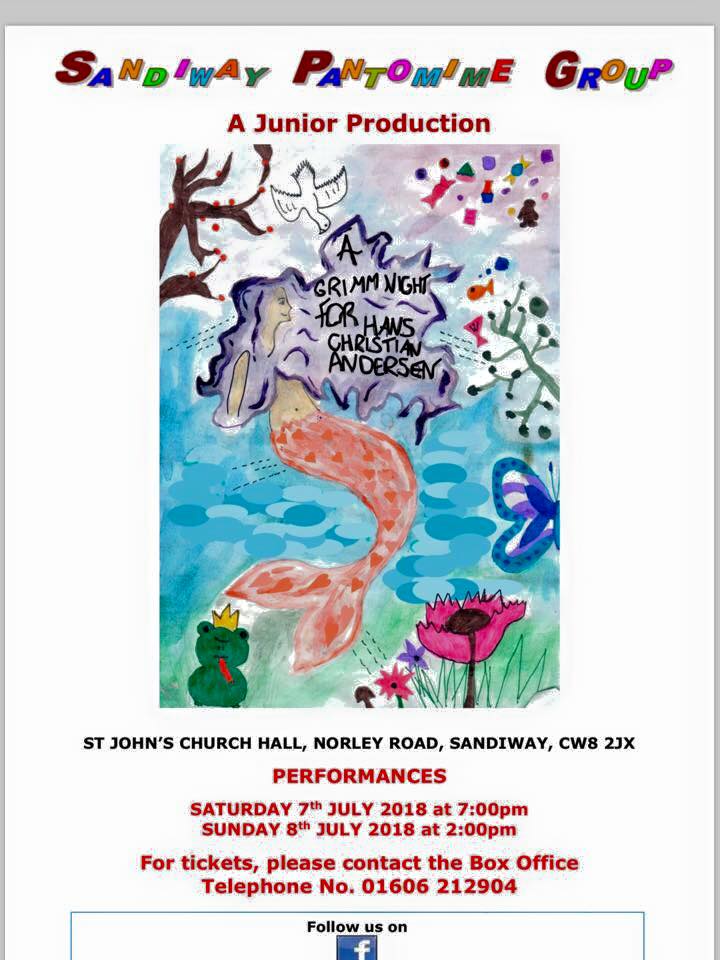 One of the better voices from the show was from Mae Everitt who played Briar Rose, Mr Grabbit and the Theatrical agent. All in all, this was a very enjoyable show, yes some of the scene changes were not slick however given the ages of the cast and the experience they will have behind them this was not an issue. I was sat very close to the prompt Lizzie Baynham and not once did I notice her having to help out.

In the main apart from the main characters all the cast had additional roles. Those who didn’t had large roles making them almost main characters. Leoni Pearson played the Ugly Duckling with Hazel Ketchell taking on the role of the Little Mermaid.

I noticed a couple of mistakes in the lines but whenever this happened they were handled with the calmness of a professional. The dancing was well Choreographed by Kerry Salisbury and performed with energy by the cast. Set design was well presented given the space available with good use of lighting.

I would recommend anyone reading this review to get along to the next show by these talented youngsters in 2019 when they put on Snow White from Thursday 31st January 2019 to Sunday 3rd February 2019, I am sure you won’t be disappointed by these talented performers. Who are ably supported by the production crew. I must say my 11 year old son was well impressed by the level of talent and he has been with me at many a professional show.

For more information about Sandiway Pantomime Group follow their Facebook page at www.facebook.com/SandiwayPantomimeGroup If you fancy trying your hand acting or working back stage get in touch with the group to find out how.

I would happily rate this show as a 4 star performance and would also say watch out for the names from the show as I feel if they remain in the acting profession we will likely hear more of some of these youngsters.