Walking into the Heron theatre of Hull Truck on Tuesday evening, I was gobsmacked by the amazing stage setting for that night’s production of Two.

Usually surrounded by seating on three sides, the stage had been transformed into a round.

All the action takes place in a traditional pub in which the circular wooden bar is surrounded by tables, chairs and bar stools.

The owners, listed simply in the programme as the Landlord (Matthew Wilson) and his wife, the Landlady (Nicola Stephenson), go about their business, serving drinks, clearing tables and chatting with customers.

This is where we in the audience had to use our imaginations as the only two people in the spotlight were this warring couple. And there is obviously no love lost between the two. 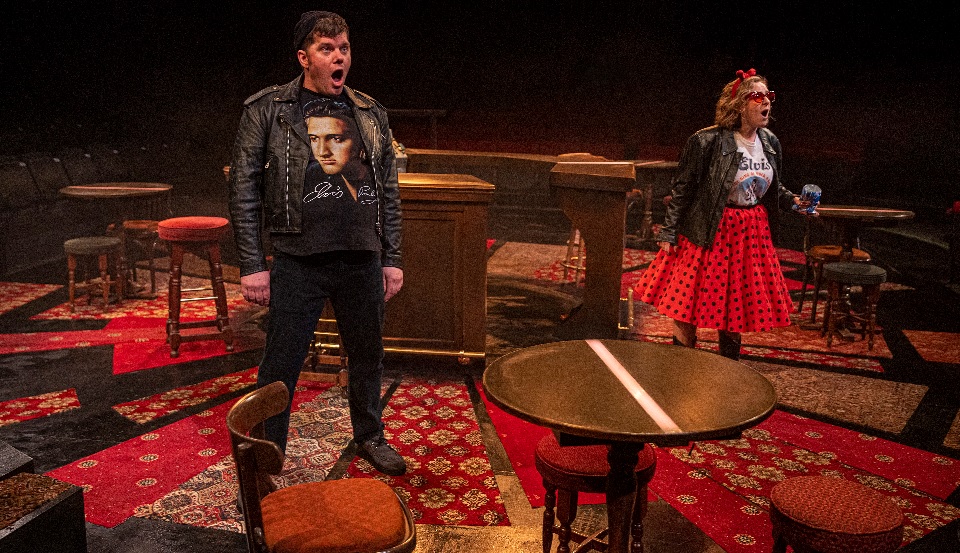 As her husband nips down to the cellar, in walks an old man. The Landlady welcomes him with open arms and gives him his pint of mild “on the house”.

Still mourning the loss of his loving wife, the old man reminisces about their life together and, movingly, ends up dancing an imaginary waltz with her. Bless him.

The next customer of note is an old lady who informs us that, since retirement, her life now revolves around caring for her elderly, infirm husband.

Her end-of-the-day Guinness is her lifeline. Bless her.

The proposal does come, but in a very painful way.

Into the fray, walk a vicar and his wife – non-drinkers. She belittles him non-stop, especially about his size, loudly telling all she wants a BIG man.

These were my least favourites on the night.

Then in walk my faves, the “Elvis” couple.

He’s desperate for a third drink, while she is eating a bag of crisps and doesn’t want a drink until she’s finished chomping. They both watch the pub tele and, eventually, decide to go home to listen to some Elvis records.

After this amusing interlude, the atmosphere changed with the behavior of the next couple. The bullying husband made my blood boil. His wife was a meek little thing who had to ask his permission to go to the loo.

She finally snapped, only to be wooed back to their table, only to be slapped for her trouble.

After this we were ready for a few laughs, and we weren’t disappointed when in staggers “the Mistress”. The worse for wear, she had come to confront the man she is having an affair with, whom she knew would be in the pub with his wife.

She wants him to choose between her and his wife. Oh dear.

Lastly, in runs a “little lad”, crying his eyes out. In a pom-pom hat with knitted mittens hanging from his sleeves, he had been left outside with pop and crisps while his dad, Frank, drank in the pub.

Unfortunately, Frank had forgotten his son was out there, hence the tears.

When the Landlady “lifts” the boy off of the bar to be reunited with his dad, she tenderly kisses his forehead, and it’s here there is a huge shift in the atmosphere.

It turns out that night is the seven-year anniversary of the death of the Landlord and Landlady’s seven-year-old son.

In a very emotional scene, with fantastic acting, an almighty row erupts between the two. Obviously long overdue, it clears the air and the warring couple at the start of Two, become marrieds still very much in love with each other.

It is hard to believe that Nicola Stephenson and Matthew Wilson are the only two actors in the round, in this very entertaining play. Between them, they realistically portray every one of the above characters, who all stem from different walks of life and differing age groups.

With such a scenario, Two needs two immensely talented actors - and Nicola and Matthew fit the bill perfectly.