Two half naked men wrestling on a stage and then pulling what appears to be random shapes on a stark white background is certainly an unusual way to start a show.

It soon becomes apparent what they doing is recreating iconic photos of human misery, like a Viet Cong fighter casually being shot in the head , that are projected onto the stage as the men recreate them again, but this time to a disco beat which somehow lessens the impact.

Julian Hetzel’s piece continues his thinking about the aestheticization of violence, and the role of the people who take pictures as observers or participants. The broader question is what is our relationship to these images as an audience?

He is off to an uncertain start as these brutal photos are reportage, not art, so the photographers are implicitly observers not artists. They are not offering the violent images as an aesthetic choice, which rather undermines the central premise. 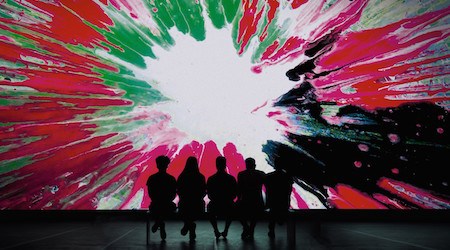 Hetzel is on safer ground when he switches the action to a fake art gallery where five people from the local refugee community, with different levels of experience of art, are asked to consider the aesthetic values of different exhibits, some of which bring back some painful memories.

Led by Kristein de Proost playing a subversive guide they are asked to consider what a model of Isis smashing an ancient statue means to them. There is a classic example of the absurdity of art as when one of the visitors smashes a piece the guide explains that the debris is now actually now more money sparking an incredulous response from a man who has been forced to flee for his life. His incredulity about what people will pay for that is certainly familiar to many gallery visitors.

Hetzel imported several kilos of rubble from a conflict zone in Syria and as the two now fully clothed actors wheel the exhibits on one of them is a replica missile covered in the rubble. One of the women looks at it saying it reminds of her home city in Iraq, which is the most shocking moment of the piece.

Yes, the central idea of art lovers being stimulated by violence is meant to an awkward one, but there is something deeply uncomfortable about watching the refugees wrestle with some very raw emotions. In fairness Hetzel has admitted he is as much a part of the problem as the solution, but at times he strays dangerously close to the sort of exploitation he is critiquing.

There is much to commend in this challenging, and often witty, performance piece that culminates in a bloody climax, but you can’t help thinking it is a bit ironic for Hetzel to use deliberately provocative imagery to criticise the aestheticization of violence when he makes his own living from it.