I think you would be hard pushed to find a member of the public who has not at least heard of the classic musical that is Grease. You could feel the excitement within the audience at Sheffield Lyceum Theatre last night, to see their much loved musical live on stage.

It is now almost 50 years since the seed of an idea grew into the world wide acclaimed show and blockbuster film. Grease had very humble beginnings, it was first performed by an amateur cast in Chicago in 1971, and the cast had to extend the show run again and again to please the growing audiences coming to witness the start of a phenomenon. Grease has been one of the all-time popular musicals from that day forward, due to the energy and fun nature of the show.

The show gives a glimpse of being a teenager in the 1950s where spending time with friends, listening to rock ‘n’ roll and impressing the opposite sex were the ultimate goals of any school student. It is a classic boy-meets-girl storyline, pieced together by classic 1950s records, extravagant ensemble numbers and hilarious friendship mishaps. Before the show it was amusing to read how over 700 white T-shirts get washed every month for this show, and how there are over 140 costume changes during the production, including 59 wigs! 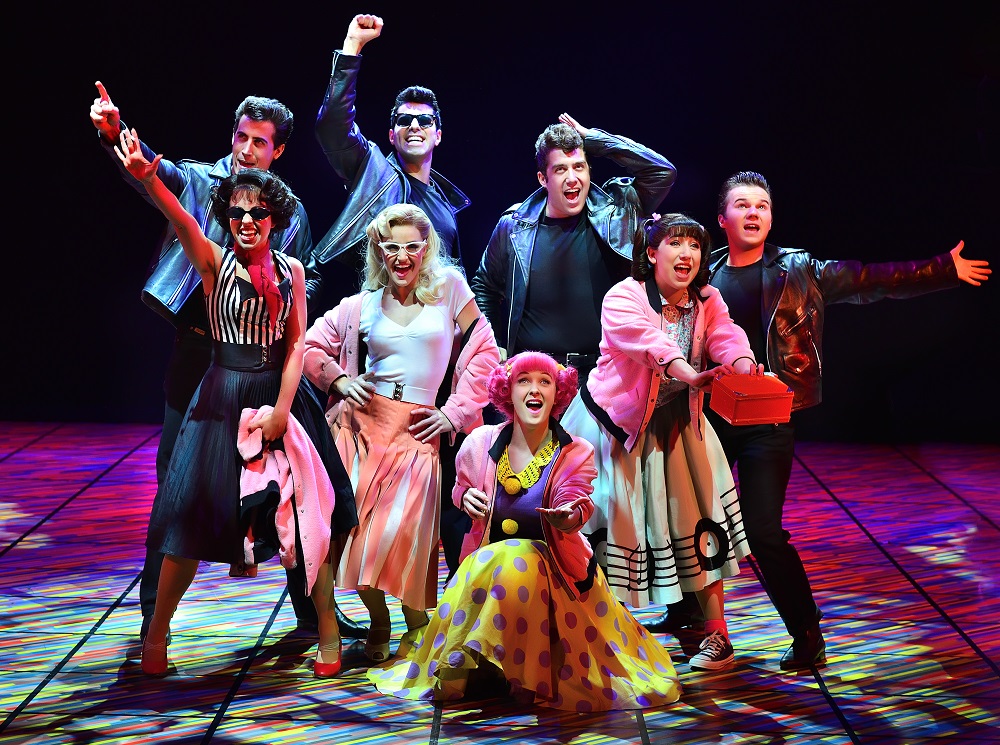 Appearance and fashion is a crucial factor of the popular show, and this production of Grease didn’t disappoint these high expectations . Head of Wardrobe Jason Cook and Head of Wigs Lauren Appleby succeeded in transporting the audience back to the rocking 1950s, with each iconic role sporting the classic look we have all come to know and love.

Continuing the current touring company trend big names from television and pop charts had been recruited to draw in the audience. However, the cast on stage clearly had a diverse range of experience within the musical theatre industry and those new to live theatre unfortunately stood out to the audience. Danielle Hope was flawless in the role of Sandy from the first moment on stage, with the perfect balance of innocence and strength in her beliefs. She worked incredibly hard to make the on/off relationship with Danny believable, and her smile and energy was infectious within the audience. Other stand out actors included the incredible Tom Senior (Kenickie) with his powerful voice and exciting performance in Greased Lighting, Gabriella Williams in her hilarious portrayal of Patty and Rhiannon Chesterman in the role of loveable yet hopeless Frenchie. Louise Lytton was very brave in her induction to musical theatre, taking on Rizzo’s well-loved songs such as Sandra Dee. However, Lytton fully utilised her acting experience to communicate the troubled nature of her role throughout. There was clearly a huge amount of talent within the ensemble, often making up for the lack of experience in some of the lead roles. Chorus numbers were well executed with a real team spirit on the stage.

One of my personal highlights last night was the incredible on-stage rock ‘n’ roll band that provided the iconic soundtrack for the show. The band were elevated above the stage and revealed at various moments in the musical, often stealing my attention with their vigour and interaction with the audience! Grease is known around the world as an entertaining, light hearted and lively musical, and last night did not disappoint on any of these anticipations. Audiences left with a smile on their face and music in their ears, well done to all involved.