Thoreau coined the phrase 'lives of quiet desperation' but Chekhov's the one whose plays go to town on it – well, not Three Sisters, obviously. The eponymous character, if not exactly a hero, and not that quiet; frustration and the inexorable passing of time make him wax eloquent, has made heroic efforts over the past quarter of a century, alongside niece, Sonya, maintaining the isolated estate of his esteemed brother-in-law.

Their only companions seem to be the servants and the local doctor, Astrov, and this little world is turned upside down when Serebryakov descends with his second wife, the bewitching Elena. The sophisticated city pair causes disruption from meal time to bed-time, not to mention their plans, financial and romantic.

Designed by Lucy Osborne, it may have been a risk setting the play in the round, especially when you're right by the swing in the opening garden scene, but inevitably draws you into the claustrophobic atmosphere, slowly moving to drawing room, dining room and Vanya's study, each indicated by judicious choice of a few shabby props, mainly tables and chairs. Similarly, with the costume design; the newcomers stand out as much because of the elegance of their attire. 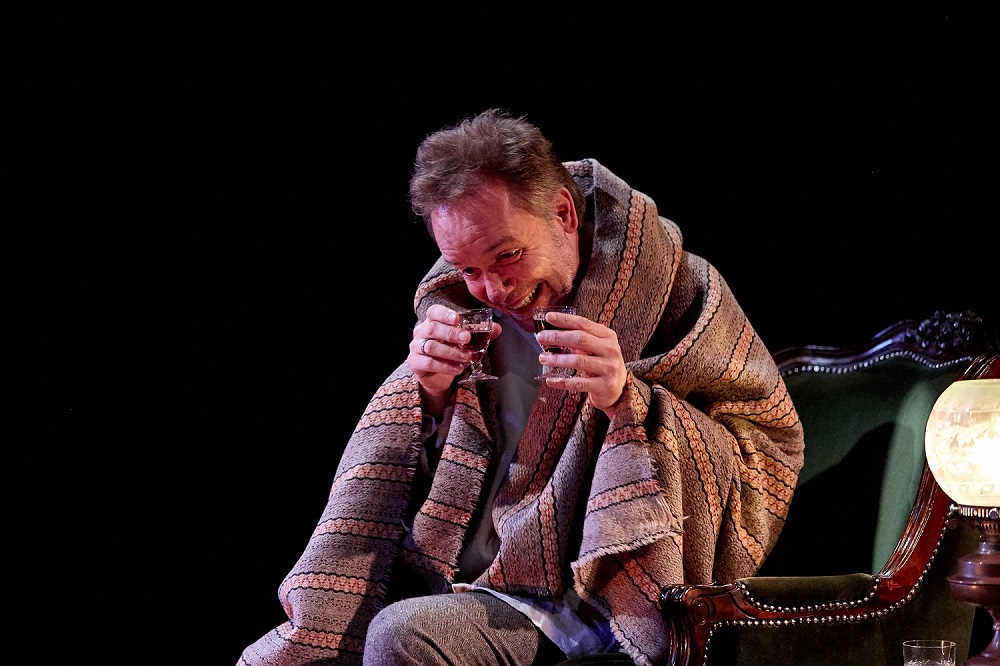 Back to the staging, and the sense of everything closing in is enhanced, if you will, by overhanging tree branches. Indeed, Astrov's impassioned speech about conservation and his efforts to protect the forests bring the play bang-up-to-date, as do various comments about equality from Sonya. And from Elena; originally played by Olga Knipper Chekhova (in a production including Stanislavsky no less), this gives Shanaya Rafaat quite something to live up to. And she does.

However, Rosie Sheehy, it's plain to see, is spectacular as Sonya, and the peasant costume sums her up beautifully, an industrious woman with no time for frills or fuss. Truth to tell, the play revolves more around her than her uncle, linked as she is, to him by work, tenuously, to her father who fails to appreciate her, as well as the passionate rivalry with her stepmother. But as a title, 'Poor Little Sonia' would probably not have been quite as appealing – and don't be mislead by the cover of the programme either, the chap with the knowing, sardonic expression is more Serebryakov than Vanya.

Having virtually hero-worshipped the great man and toiled away constantly to do him honour, and provide him with funds, the poor man has come to realise his master is a monster of selfishness; never mind feet of clay, this is a Golem. Martin Turner plays the villain with considerable verve, and although completely unsympathetic, it's horribly fascinating to watch such an utterly self-absorbed, self-pitying creature. Interestingly, he is mirrored by the servant, Telyegin (Brendan Charleson), although that's not quite the right word as Serebryakov's self-righteous indignation is replaced by the latter's whining complaints.

The unfortunate Vanya also has to endure constant sniping from his mother Mariya (Sharon Morgan) and the fact that she seemingly adores her son-in-law, but he gives as good as he gets. Jamie Ballard plays this convoluted character full tilt, wringing every drop of pathos and humour from him. Likewise, Astrov, an excellent performance from Oliver Dimsdale, is another tortured soul, who proves to be as much of a catalyst as Serebryakov.

It takes some doing to portray bored people leading boring lives without boring the audience, but this is where Chekhov's skills lie, for example, in his use of dialogue and deft touches of humour. Not exactly a bundle of laughs then, but still a remarkably memorable production.