Gaslighting, an insidious form of torture and coercive control causing excessive mental strain in the victim, is thought of as a fairly recent phenomenon, with survivors sending positive messages of support and strength through the medium of TED talks and social media campaigns. However the terms was coined by psychologists in the 60’s, tipping a cap to Patrick Hamilton’s skilfully written depiction, which first debuted on stage in 1938, quickly succeeded with not one, but two silver screen renditions in 1940 and 1944.

Notorious difficult to quantify and evidence, an individual will distort and even create events to gaslight another – to create a cognitive dissonance which leaves the victim questioning their understanding of events, and eventually their own sanity. 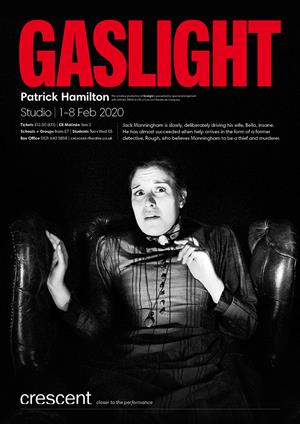 It is in this state we find poor Bella Manningham at the top of Act one. Beautifully brought to what little life she has left by Ilana Charnelle Gelbart, Bella has clearly suffered under the coercive control of her husband Jack (Jake Benson) for some time. The pair have a clear chemistry, and Miss Charnelle Gelbart really brings out a sense of Bella wanting to reassure and win the approval of her husband. Throughout the opening we watch the pair ride the tempestuous emotional rollercoaster occurring when a narcissistic sociopath is in charge. Despite colourful interjections from the servants (played by Zena Forrest and Charlotte Thompson), the lion’s share of the action is a two hander between our protagonist and her aggressor.

Inspector Rough (Colin Simmonds) brings us light relief along with intrigue and a great deal of back story. Simmonds skilfully provides a fatherly foil to the brooding character presented by Benson. Charnelle Gelbart has to draw on a broad range of emotion in this piece, and the visible blossoming as trust develops with the Inspector is beautiful.   Act one ends with a sense of both foreboding and cautious optimism – knowing that either way, the story will conclude with an end to Bella’s misery.

Although a little clunky at times, and with occasional pace issues, the story is told with warmth and sincerity. The characters are vivid and the cast skilfully bring the piece to life.   Colin Judges’ set design is delightfully intricate, and the attention to detail is evident. Lynn Hems simple lighting design puts the focus firmly on the gaslights on the set, and the action unfolding.

A piece of theatre as timely today as it was when written.