Manchester School Of Theatre's final production for this season was a very brave choice indeed; but one which excellently complemented The Royal Exchange's House Of Bernada Alba, as they chose to present two one act plays by Spain's most celebrated playwright Frederico Garcia Lorca.

Lorca was born near Granada in 1898 and very quickly came to prominence as not just a playwright but poet and theatre director too. He had a genius for applying in his works such things which would later be labelled as 'symbolism' and 'surrealism' and yet still keeping his work very much rooted in the soil of his birth. It is impossible to read a Lorca play or one of his poems without having an almost personal insight into the lifestyle, customs, traditions, language, and nature of early 20th century central Spain. Sadly Lorca was executed during The Spanish Civil War at the age of 38. Who knows what further works of genius could have been written if history and fate had not turned out the way it did.

However, back to Manchester. I mentioned all that simply because in order to stage a Lorca play; the setting, mood, lighting, even the acting need to be somehow in harmony with each other and be able to convey, through poetry; yes, poetry; since Lorca's theatre writing is deeply poetic and the continuing themes of flowers, plants, nature, the land, weather, all play an important part in his works. Never mind all the human emotions of lust, love, revenge, honour, and a strange stoic acceptance of fate. 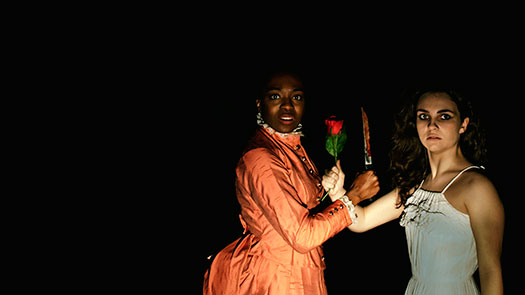 Were all of these evidenced in tonight's productions? Yes, in truth I do believe they were. The set, designed by Olivia Du Monceau, was a lovely traditional plastered stone wall house interior, and for the first play filled with some excellent period furniture. Combined with some effective lighting and costumes, managed to transport us very nicely into the world of turn of the 20th century Spain. The only thing which irritated me sadly was the fact that we could see the cast entering and exiting behind the walls, which became totally transparent on their entrances and exits. It really did not work at all in the first play, and only created a nice effect in the second when the wedding guests were outside or walked into the church. At other times, this effect, which I must believe was the director's idea, simply did not work at all sadly.

The first play, Dona Rosita, The Spinster, is not a very well known play of his - at least not in the UK - and I was watching it tonight for the first time. Undeniably Lorca; all his trademarks were there, and the actors gave a fine interpretation of it. The relationships between characters and their behaviours had been very nicely measured. A cheeky housekeeper who likes to push boundaries but always gets away with it, played here with relish by Brogan Bailey, brought humour, bonhomie, and realism to her role and the play as a whole. Whilst the rather stoical lady of the house Lucy Padwick gave a cold and dignified performance contrasting nicely.

The ennui of life and the eternal waiting for her betrothed was nicely placed, although this sadly brought about a lack of pace to the play in general. I do feel that the cast could have picked up on their cues much quicker than they did and not leave quite as many pauses. Also, there were times when I was struggling to hear. I do believe I have made comment before about voice projection from students of Manchester School Of Theatre, and so it is possibly an area which is neglected in your studies, and that is a huge pity.

The second play, after the interval was the much more well-known Blood Wedding, and this was indeed a lovely interpretation of this fiery symbolic play. Elaine McNicol's mother was proud and matriarchal, although she did not look or behave old enough unfortunately. Sarah Day-Smith played the Bride with a certain resigned fatalism, whilst her groom, Jacob Kendall tried everything in his power to shake her out of this blueness bringing in a lighter and more urgent dimension to the play.

Both casts were strong and ably supported the protagonists in their journeys and director Alan Dunnett clearly understood the nature and feel of Lorca's work. Having both plays back-to-back like this made for a very interesting compare and contrast discussion afterwards, but the evening did feel somewhat long though, despite the superb performances from the talented students.