Partly developed from 16th century entertainment, the old yet timeless tradition of pantomime continues to bring a smile to the faces of many across the UK and Western world, in almost every theatre around, with the inclusion of modern and classic songs, slapstick comedy, gender-crossing actors, dancing and topical humour combined with a story loosely based on a well-known fairy tale. As many other theatres have taken the same decision, Liverpool’s Epstein Theatre plays host this year to an Easter offering of variety in the form of a pantomime, with LHK Productions’ Snow White, before the traditional festive one at the end of the year.

Starring Scouse-born Ricky Tomlinson, of Royle Family fame, who it was a surprise to see in the audience, we are treated to his memorable and much-loved characterisation in the show as the Magic of the Mirror, as we progress with the story. Also on the bill is The Apprentice’s James Hill who was also apparently in and won Big Brother. His role as Prince (Charming) Valiant of Valdenia has probably contributed to the ticket sales but his talents may well remain in television and cheeky charm as his talents onstage are slight, honestly, in that he must refrain from eye contact because he is focussing on what he is to say in line with the script, as well as acting and - when he can remember the words and actually attempts to do so - sing (his duet of You Can’t Hurry Love with Snow White was more of a solo for her with the odd mouth movement). He is somewhat attractive (with possibly more than just the gym contributing to his spray-tanned physique) and his Spiderman skills in the auditorium during a chase by fellow cast members is impressive.

Those cast members are Ali-G style Dame Debbie and Lewis Pryor as Muddles who does well to get the crowds going and very impressively does indeed muddle his words. A likable character who does ‘jester bout’ anything, he also has a voice to sing the solo of Justin Bieber’s What Do You Mean where he pays tribute to his lover’s indecisiveness. Most of the cast are ‘triple threat’ but Dame Debbie is outstandingly funny, played by the multi-talented writer and director Michael Chapman. 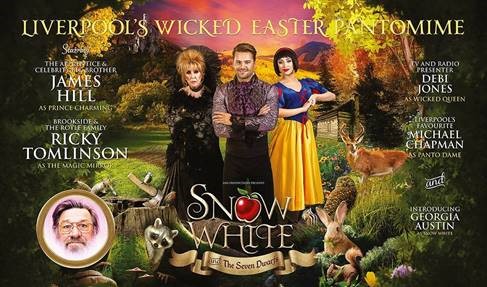 The first character on stage is Fairy Tamara (Olivia Horton) who sadly could not be seen for the most part of her presence, due to the fact that she just wasn’t as forward (downstage) as she could have been - the limited viewing also stands also for the mirror - but she played the part nicely.

The highlight of the show is the dancing and I must pass comment that, whilst choreographer Holli-Jo Bradley’s wandering in and out of backstage to the auditorium may have been welcomed by some audience member, it was distracting (in a tight white dress) and she had no reason not to have complete confidence in the dancers on stage doing as instructed. Their moves were in sync, they looked confident and strongly accomplished. They are an asset to the show and I hope they are aware of this. While I am on the dancers part, I must note that, whilst we had the pleasure of the LHK Youth Theatre Company dancers tonight, there are other troupes who will have their chance to shine in 8 performances along the run - they are: Boom Productions, Hamilton Dance and Drama, Jan Williams Theatre School & Christopher Linzie School of Dance and The Works Academy. I must also commend the male ‘Senior dancers’ (Jordan Bramhall, Michael Jones and Jack Linsner) who join their female counterparts (Elieyah Navis, Georgia Pye, Chloe Lang, Olivia Baccino and Chloe McLeown) as cheerleaders, as well as performing some suggestively female dance moves, in the many dance numbers that enhance the experience.

The show’s namesake is played by Georgia Austin who has a variety of ensemble experience under her dance belt and portrays this leading part well, with some nice vocals but seemed to rarely smile. She is a comfortable actress and clearly a performer but I couldn’t tell whether she enjoyed the part (I like to know and can see enjoyment from other cast members). Finally, in the main cast, as well as the dwarfs who are in two teas, Tom Burroughs is Herman, Henchman to Wicked Queen Edwina (BBC Radio Merseyside’s Debi Jones). Herman is played well but Jones’ portrayal is very good, especially with her vocal of Madcon’s Beggin’ (I admit I expected ‘I Put A Spell On You’ or ‘Trouble’).

The live band of only three(!), including Musical Director Alan Moore (and two Chrises) - although amplified a lot - were great and contributed to the flow of the show, even with a scene change that featured the introduction to ‘Take Me Or Leave Me’ from the musical Rent. Their backing to the likes of One Direction’s History, Everlasting Love and the panto components of dream job-orientated ‘If I Were Not …’ and a sing-a-long of ‘The Wheels On the Bus’, made famous on Lord Sugar’s reality show by Mr Hill, which featured three children on-stage (Carly, 11; Max, 6 and David, 4 tonight).

This well-directed, well-choreographed classic show is certainly one to see this Easter before booking for their forthcoming Christmas presentation of Aladdin and Youth productions of Fame in July and Oliver in November (from which a song features). With the few technicalities of positioning, as well as the mass of fog, lots of lighting and lack of singing from that one cast member, there is a lot of good to balance the improvements and I hope that the fact that it was the second night, although not an excuse, does mean that they may be taken on-board.

Please do not miss the opportunity to see Liverpool’s Magically Wicked but Magical Fairytale Easter Panto. On until Wed 6 April: epsteinliverpool.co.uk/whats-on/snow-white.aspx