It is almost that time of the year again, with Christmas just around the corner and Pantomimes ready to take over theatres across the country. Stealing a march on the masses the Theatre Royal in St Helens have chosen to repeat last year’s success by producing a show in the schools half term week.

Judging by the almost capacity audience on this Sunday evening this year’s offering, The Wizard of Oz seems like a good move. Produced by Regal Entertainment looking around the auditorium and seeing all the flashing toys and excited children, both young and old, you’d believe it was Christmas already.

The Wizard of Oz is one of the more modern Pantomimes on the circuit and the producers here have embraced this by mixing together the well-known song from the 1939 MGM classic with more up to date songs both of which appeal to the audience. For those parents who thought, and maybe even hoped Disney’s ‘Let it Go’ from Frozen, last year’s most used pantomime song was no more, beware its back! This proves a clever move by producers Chantelle Nolan and Jane Joseph with the entire audience under a certain age singing along with all the energy they had.

Taking on the lead role of Dorothy is Charlotte Gallagher who oozes confidence and has a superb strong voice to match. Her interaction with both the younger members of the cast and of course the ‘friends’ she meets on her journey to Oz is completely believable. He co-star Toto was adorable, a Chihuahua who was impeccably behaved throughout, no doubt eyeing up future roles in Legally Blonde and the like.

We all know the story of this Pantomime and on her journey to Oz, Dorothy meets the Scarecrow (Phillip McGuinness), The Tinman (Mark Allen) and Lion (Simon Foster). All three play the roles with confidence and draw laughs from the audience almost immediately. St Helens resident Dame Foster puts in an especially strong performance to match his stunning costume, it may not be frilly knickers and huge wigs in this production however, he was still as noticeable on stage.

The good and the bad of this show are local radio personality Claire Simmo as Glowing Glinda and Charlie Griffiths as Evil Eva. Griffiths as Eva is menacing in her green skin and instantly turns the audience against her as she battles to gain ownership of the ruby slippers. The complete opposite is Simmo as Glinda, she guides the audience through the story from the first moment until the last when she calls upon her sister Gloria (Laura Gregory) to help send Dorothy home after the Wizard (Jason Bacon) was unable to grant her that special wish.

The joy of every pantomime for me is to see the younger members of the cast playing a pivotal role in these shows. The Munchkins were superb, dressed from head to toe in every luminous colour variation you could possibly imagine, they undertook the choreography from Sarah Walker with enthusiasm and delivered time and time again. There are three groups of children rotating throughout this run named Glitter, Sparkle and Fairy Dust. Tonight was the turn of Glitter and they shone very brightly indeed.

Sadly there was no mention in the programme noting who was responsible for the music tracks used during the show. This is a shame as they deserve a name check with some nice arrangements and upbeat numbers which had the audience clapping along.

I think it is fair to say, and those there tonight will agree I am sure, the star of the show was Jake. Jake won the chance along with three others to take to the stage for the sing-along number at the end of the show. He announced he was one year of age (the jury is out on that), performed a wonderful dog impression and just melted the hearts of everyone in the theatre.

The Wizard of Oz is a brilliant, feel-good show which cannot fail to send you away with a smile on your face and a skip in your step. Go and book your tickets now before it is too late as the show only runs until Sunday 1st November and after tonight I can’t wait to return in December to see the Christmas show Cinderella. 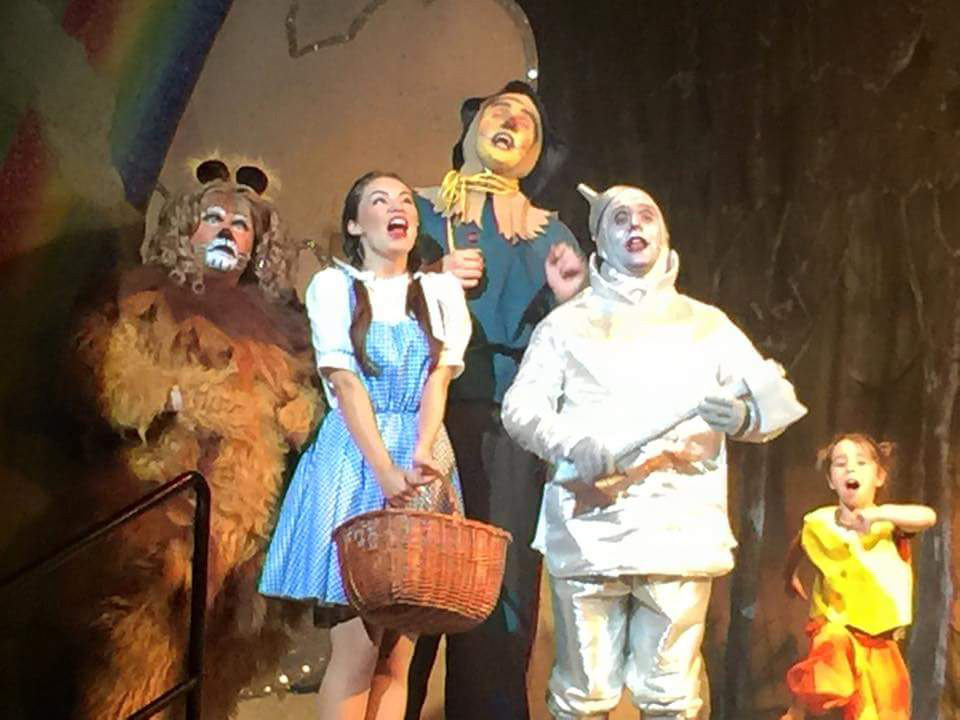