This six piece tribute band to the American rock band The Eagles, took to the stage on the first of a 100 date tour to an almost capacity audience. The stage is set simply with a raised platform for the drums and keys and fronted by five guitarists and accompanied again with simple, but effective lighting. Launching into their first number 'How Long' followed by 'Busy Being Fabulous' and then featuring songs from the iconic Eagles album 'Hotel California' which was released in 1976.

Garreth Hicklin swapped his guitar for the keyboard and performed as lead singer for the next song 'Peaceful, Easy Living' before the turn of Trev Newnham to take lead, who informed us that 'New Kid In Town' was voted 5th best Eagles song but had been taken out of the show previously, but was now back in due to public demand. Both gave brilliant performances and it is refreshing to find a band with not one or two singers taking lead, but, as in this case, each of the five guitarists capably taking on the role. Each song they sang I declared as my favourite, with my first being 'Ol' 55' with fabulous harmonising, but that was before I heard Christian Phillips with 'I Can't Tell You Why'! Gregg Webb and Al Vosper are the other two vocalists/guitarists with Tony Kiley on drums. To call any of these guys 'just a guitarist' is an understatement, they are multi talented in the array of guitars they played which I lost count of! The stage hand deserves a mention for his presence on stage setting up the guitars (and tying loose laces!) as he is almost on as much as the band members themselves! The camaraderie between the Illegal Eagles is evident with the easy banter between them. 'Take it Easy' took us to the interval with the audience beginning to sway along and clapping to the song. Most songs people are just happy to sit back and enjoy listening to, such is the relaxed and melodic style of the performers. 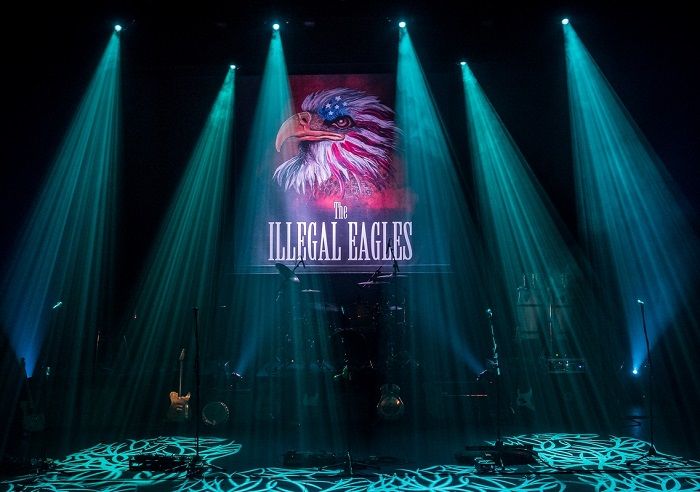 During the first half I thought the vocals sounded slightly muffled and occasionally overpowered by the music and wondered if that was because I was not completely familiar with all the songs and it was the actual style, but after speaking to other audience members I found I was not alone thinking this! However, it seemed to have been rectified after the interval and the band were back on brilliant form bringing rapturous applause and cheers when they opened with the popular 'Hotel California' The second half of the show was a little more upbeat and there was much more interaction than in the first. Many of the songs have instrumental sections which allow for the skill of the musicians to be enjoyed.

'Lyin' Eyes' was written by Don Henley and Glenn Frey, original band members of the Eagles and tonight given justice to by Vosper taking lead and was an obvious hit with the audience. Although The Eagles disbanded in 1980 they did reform in 1994 and over the years have made appearances and albums but after the death of Frey last year (2016) they announced there will be no more tours.

The whole evening was a thoroughly enjoyable and entertaining event and even though I am not a particular fan of the Eagles I loved it. Each member is committed to being the best and that is why the Illegal Eagles will go on to fill theatres and perform for many more years to come.