Madama Butterfly is a staple of the operatic repertoire around the world, so it is hard to believe that the original two-act version was so poorly received at its premiere in 1904 at La Scala in Milan. Puccini rewrote it in three acts to great success before reverting to the two-act formula that we see performed today.

We start with marriage broker Goro (Ruslan Pacatovici) showing US naval lieutenant Pinkerton (tenor Giorgio Meladze) round the home he will share with his Butterfly bride-to-be. Pinkerton is obsessed about possessing her even if he crushes her fragile wings, whilst American Consul Sharpless (baritone Iurie Gisca) warns him of the tragic consequences his game could have. The Butterfly duly lands in the form of young Japanese girl Cio-Cio-San (soprano Elena Dee) supported by maid Suzuki (mezzo-soprano Myroslava Shvakh-Pekar), and they are married by the Commissioner (baritone Vitalii Cebotari). Her love makes her willing to sacrifice everything for him and sees her disowned by her uncle, a Bonze (bass Vadym Chernihovskyi). Her butterfly silhouette as she undresses is framed by her fear of being pinned to a board, never to escape. The act-closing four-part love duet is exquisite. 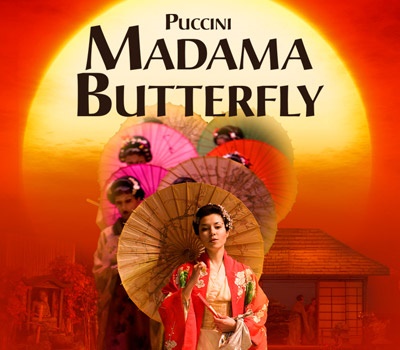 The second act finds Cio-Cio San living with Suzuki but almost destitute: Pinkerton had left promising to return within a year but three years on is still not back. She gazes out to the sea and dreams of the day they will be reunited. Sharpless arrives with a letter confirming the imminent arrival of an American ship but doesn’t have the heart to tell her Pinkerton has remarried, especially when she introduces him to Sorrow (Xin En Liang), her and Pinkerton’s son. He encourages her to marry Prince Yamadori (Cebotari), a willing suitor, but she has eschewed her native culture for American values and any doubts are wiped away by the arrival of the ship.

Cio-Cio-San waits expectantly for Pinkerton’s return but eventually retires exhausted. Sharpless and Pinkerton arrive with Pinkerton’s wife, Kate (soprano Maria Tonina), and ask Suzuki to explain to Cio-Cio-San that Pinkerton wishes to take away the child. Cio-Cio-San appears full of joy but seeing Suzuki’s solemn face realises the true intentions behind his visit and only tragedy can ensue.

All the cast performed strongly. Dee’s beautiful voice – I adored ‘Un bel dì vedremo’ – resulted in a mesmerising performance, with Shvakh-Pekar, stepping up from chorus, delivering wonderful support. Gisca’s Sharpless offered sympathy and understanding at every turn, whilst Meladze’s officer was certainly no gentleman and is rightfully booed at the curtain call before receiving deserved applause for his performance.

Special thanks to Stagecoach Theatre Arts Salford and Didsbury for providing students.

Director and Producer Ellen Kent is to be further commended for the exquisite set which is remarkable for its colour and reflection of late 19th Century Japan - a paper house with sliding doors set in a spectacular garden – and fabulous costumes including antique wedding kimonos.

The live orchestra, conducted by Nicolai Dohotaru, flowed through every subtle nuance with their ‘Coro a bocca chiusa (Humming Chorus)’ an absolute joy. The lighting transitions, accompanied by a clever use of silhouette, reflected each sunset and sunrise as we move from afternoon to evening to night before the dawn heralds further hope of love and opportunity which are inevitably dashed in equal measure in this sensitive and moving production.

Madama Butterfly is touring throughout the UK and Ireland as part of Senbla presents Ellen Kent’s Spring 2020 Opera Festival with full details available at www.senbla.com

The Palace Theatre dates from 1891. Following a major refurbishment, it reopened in 1981 and has since then retained its position as the premier provincial touring venue.