La Bohème is a four-act opera by Italian composer Puccini, based on a novel, Scènes de la vie de bohème, by Henri Murger, and following its world premiere performance in Turin on 1 February 1896 at the Teatro Regio, it has become one of the most frequently performed operas worldwide.

The play is set in the Latin Quarter of Paris in about 1830 where on Christmas Eve we meet four struggling bohemians living in a garret: a poet, Rodolfo (Tenor Vitalii Liskovetskyi); a painter, Marcello (Baritone Iurie Gisca); a philosopher, Colline (Bass Vadym Chernihovskyi); and a musician, Schaunard (Baritone Vitalii Cebotari), who arrives having had some good fortune and they agree to celebrate by dining at Café Momus. They are interrupted by their landlord, Benoît (Eugeniu Ganea), but cleverly trick him into revealing he has been playing around which allows them to throw him out in comic moral indignation without paying their rent. 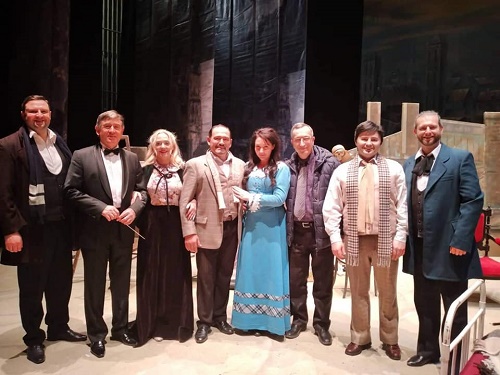 Whilst the others leave, Rodolfo remains but is interrupted by a knock at the door: a young girl needs to light her candle but then becomes faint and drops her key. As they search, Rodolfo discovers her name is Mimi (Soprano Alyona Kistenyova). As his impatient friends call for him, Mimi is framed in moonlight and they declare their love for each other.

As the party dine in the hustle and bustle of the Latin Quarter, with toymaker Parpignol (Ruslan Pocatovici) selling his wares, a former lover of Marcello, Musetta (Soprano Maria Tonina) appears with a rich and elderly admirer, Alcindoro (Ganea), in tow, and, to his embarrassment, she sings a risqué song to garner Marcello’s attention.

The opera resumes some months on with a clearly unwell Mimi searching for Marcello who is working in a nearby tavern. She tells him of Rodolfo’s jealousy although we discover this is a sham: he is too poor to care for her and hopes she will find love with a wealthier suitor. They are reunited in their love whilst, in contrast, Marcello quarrels with Musetta over her flirtatious behaviour.

Some weeks later we return to the garret where Marcello and Rodolfo are caught up in nostalgia for their girlfriends who have found new, wealthy lovers. Suddenly Musetta appears with Mimi in tow: reconciliations seem in order but will it all end too soon?

This was an excellent production by the celebrated producer Ellen Kent who also directs and with Nicolae Dohotaru conducting, the beautifully soft playing of the orchestra subtly echoed the emotion throughout. The hand-painted set design by Nadezhda Shvets provided a wonderful tapestry of depth and detail that combined with the rich colour of the costumes to offer up a palette with more than a nod to Marc Chagall; Act Three’s snow falling was literally the icing on the cake.

All the cast performed well, and I really enjoyed the cleverly choreographed camaraderie between our four artisans. Gisca balanced the humour and brashness of painter Marcello perfectly whilst Liskovetskyi brought Rodolfo’s poetic emotion to the fore. We’ve all met a Musetta and Tonina’s playful elegance delightfully captured every one of them. Kistenyova shone as Mimi and as she sang of love she was undoubtedly the first kiss of Spring: pure poetry.

Support tonight was provided by Stagecoach Theatre Arts Salford and Didsbury, and Hector the dog.

La Bohème is touring throughout the UK and Ireland as part of Senbla presents Ellen Kent’s Spring 2020 Opera Festival with full details available at www.senbla.com

The Palace Theatre dates from 1891. Following a major refurbishment, it reopened in 1981 and has since then retained its position as the premier provincial touring venue.