The naked truth of unemployment and the loss of hope it can bring is revealed in this brilliantly funny, laugh-a-minute show. Written by Simon Beaufoy and based on the 1997 film of the same name, the show is set in post-industrial late 1980’s Sheffield where six unemployed former steel workers struggling to make ends meet, form a Chippendale-style male striptease act with a difference, they will be going all the way – the full monty.

I was very pleased to see Simon Beaufoy’s original screenplay returned to its Yorkshire home - the first conceptualisation of it as a musical (2000) was Americanised and set in Buffalo, New York. Despite an original soundtrack and stellar cast, the original Broadway production received mixed reviews. I must admit it’s hard for me to imagine this set anywhere other than the northern grit of 1980’s Sheffield.

Soap star Gary Lucy of Hollyoaks and Eastenders fame lead the recognisable cast as the cheeky but loveable Gaz and portrayed an extremely tender relationship in his interactions with on-stage son Nathan, played brilliantly by 16 year old Frazer Kelly. 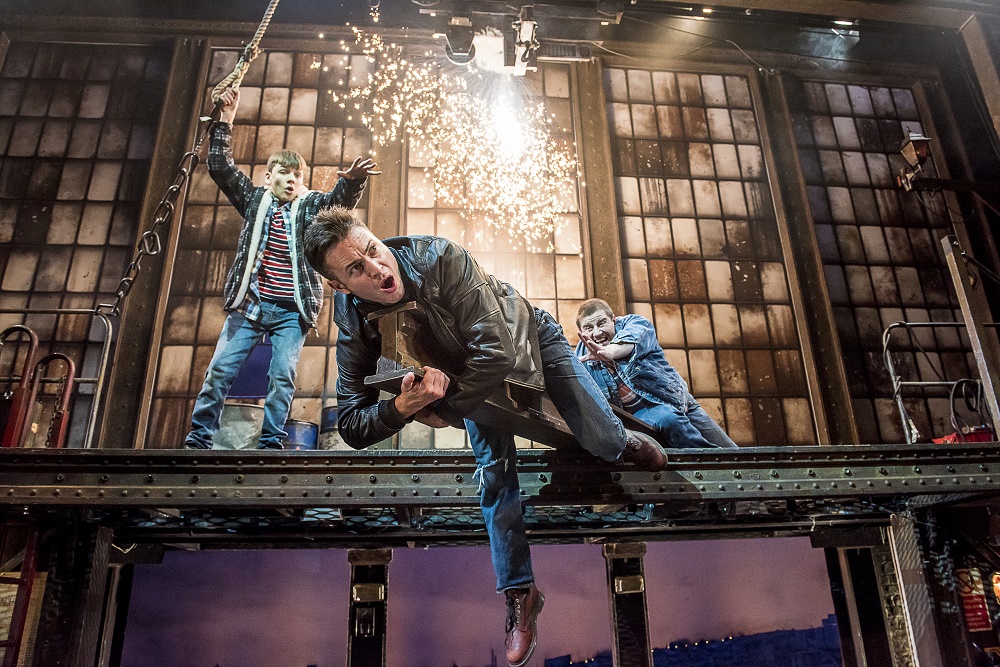 Gaz’s best friend Dave was played by Torchwood’s Kai Owen and was a surprise hit with the females in the audience, Louis Emerick (Coronation Street, Brookside) got the first belly laugh from me as the arthritic but amazing mover Horse, Joe Gill (Emmerdale) as the depressed and awkward Lomper got the audience on side from the beginning and Casualty’s James Redmond completed the group as Guy, the physically blessed, gay plasterer-hairdresser.

For me, the stand-out performance of the night was Andrew Dunn (Dinnerladies) as the resistant, Conservative Club member and former-foreman Gerald who keeps his unemployment from his spending-prone wife in some emotional yet amusing scenes.

Staying close to the original film and characters and covering important issues such as mental health, sexuality, body image and unemployment, the actors really do lay themselves bare in this production. Rupert Hill’s direction handled all this with great sensitivity, pathos and when appropriate, hilarity - from the literal use of gallows humour by Gaz and Dave after preventing Lomper’s attempted suicide, to the latter discussions between him and Guy about his homosexuality.

Whilst this is not a musical, it is a play driven by an iconic soundtrack featuring the music of Hot Chocolate, James Brown and Tom Jones, and though the memorable scene from the film featuring the group practising their moves to Donna Summer’s Hot Stuff in the post office dole queue didn’t quite work as well on stage as it does in the film, it was still an extremely comical moment.

The set was fairly static with basic changes in props and furniture to convey a variety of places such as the old steelworks, jobcentre and social club. This resulted in efficient changes completed by the cast – a highlight was when they danced the set around the stage to transform it into the ballroom dancing lessons at the Conservative Club. Whilst the set worked for the most part, one scene that didn’t quite hit the mark for me was what was supposed to be the exterior of Gaz’s ex-wife’s house - there was nothing here by way of set, props or lighting to convey the setting and I feel some small adjustments would remedy this.

From the outset, thanks in large part to an eager hen party who cheered from the second Gary Lucy graced the stage, to the Opera House’s audience being the crowd for the group’s debut performance, the whole show really made for a rather enjoyable, if unconventional, form of immersive theatre. Book your tickets or risk missing out on a “chuffing” good night out. https://goo.gl/Gnv1zZ