‘Two’ is a play written by Jim Cartwright, a Lancastrian writer who is famous for writing “The Rise and Fall of Little Voice” amongst many other successful plays.

The trademark Northern acidic wit and bitterness shines through loud and clear in this two-handed play.

The cast comprises Mary Ellis and Chris Billington who play seven characters each in what are mostly emotionally draining and demanding roles and they cope admirably.

The play is set in a pub run by a bitter couple – we don’t get to know their names as they refer to each other in derogatory terms only. This forms the basis of some comedy to begin with but it soon becomes apparent that there is an ever present darkness in their lives which isn’t revealed until the final scene.   I did like the line which summed up their lives: “The bitter’s never off here.   NEVER.” 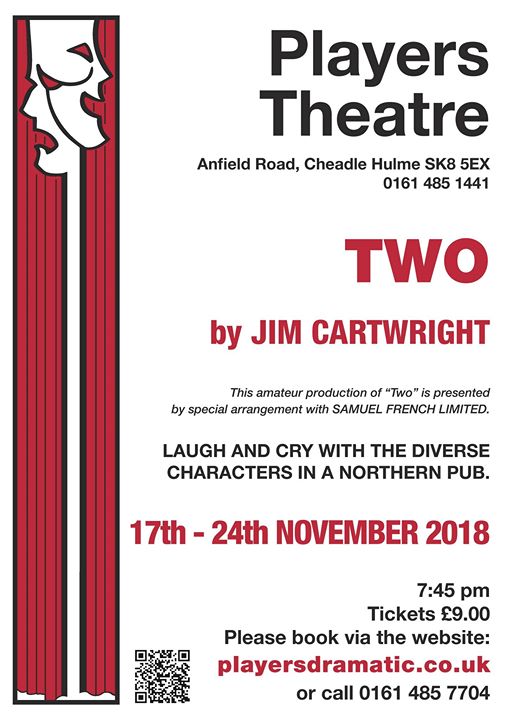 Interspersed between the scenes between the Landlord and Landlady we have glimpses into the lives of various other pub regulars by way of eight scenes. There is pathos a-plenty and some humour but mainly gritty realism - which isn’t always comfortable to watch.   The comedy scenes didn’t work particularly well for me: I found the writing to be laboured and clumsy but Mary and Chris did their absolute best with them and no criticism is directed their way.

There were two stand out scenes for me: the first was a solo scene where Chris played an elderly widower.   The characterisation was wonderful.   It really got to me and it was extremely moving. The second scene was between a couple in an abusive relationship.   Without saying anything in the first moments of this scene, Chris and Mary completely conveyed the roles of abuser and victim which I found extremely chilling.   Chris switched from playing one relatively light role into a threatening, sinister bully in a matter of seconds and it was quite amazing to see.   Mary encapsulated the empty shell of a domestic violence victim expertly.   It was totally convincing and made for rather uncomfortable viewing, whilst at the same time being absolutely compelling.   I was disappointed that the audience didn’t applaud this scene as they had done the others but I suspect everyone was slightly unnerved and wasn’t sure if it was something that should be applauded.

The set is very well put together (a bar and some tables) but I found it a little strange that there were no other props:   whilst I understand that there were only two actors playing all the roles in this play and it would be a little difficult to serve drinks in glasses to imaginary customers, I did feel it needed a little something as it was rather stark.   That said, however, once it really got going, that didn’t seem to matter as much.

I liked the crossover of characters which was smoothly and skilfully done and there was a very clear delineation between them:   even though it was the same people playing different roles, you didn’t see them as the same people as every single one was completely different and that is down to the skilful acting of Chris and Mary.

Some of the scenes would benefit from being a bit tighter. There was quite a lot of empty time when the Landlord was pulling imaginary pints or taking orders and it emphasised the fact that there were no props and no-one else present and it lost impetus.

I also found that the scene with the old lady on her own was bordering on the pretentious and rather unrealistic as I just don’t think a world-weary elderly lady caring for her sick husband would speak in that way. That again, however, is down to the writing.

The reveal behind the misery of the Landlord and Landlady comes in the final scene and again, I feel the writing let it down as there was too much exposition but the raw emotion produced by Chris and Mary was excellent.

This is not a play that will leave you with the feel-good factor but it is certainly worth seeing as it is a series of snapshots of people’s lives and as in life, some are funny and some are heartbreaking.   It must be extremely challenging to play all these roles and have to switch emotions on and off and the cast of two/Two have done an outstanding job.