In a whirlwind of sparkles and stilettos Kinky Boots came to Manchester!

This polished production is based upon the book written by Harvey Fierstein and the film written by Geoff Deane and Tim Firth. Cyndi Lauper wrote the music and lyrics.

The story is entwined around the Northamptonshire shoe industry which due to its central location and plentiful supply of natural materials became the hub for boot and shoe manufacturing.

We meet Charlie, whose father Mr Price wishes him to go into the family shoe business. Charlie has other ideas and would prefer to follow his girlfriend Nicola to London to take a job in Marketing. Fate deals its cards and Charlie must go back home to take over the running of the factory following his father’s death. He soon finds the factory is financially ruined and he has the task of trying to change the factory’s fortunes. After a chance meeting with the flamboyant Lola, Charlie begins to see a way that he may be able to breathe new life into the business to make Price and Son rise from the ashes. 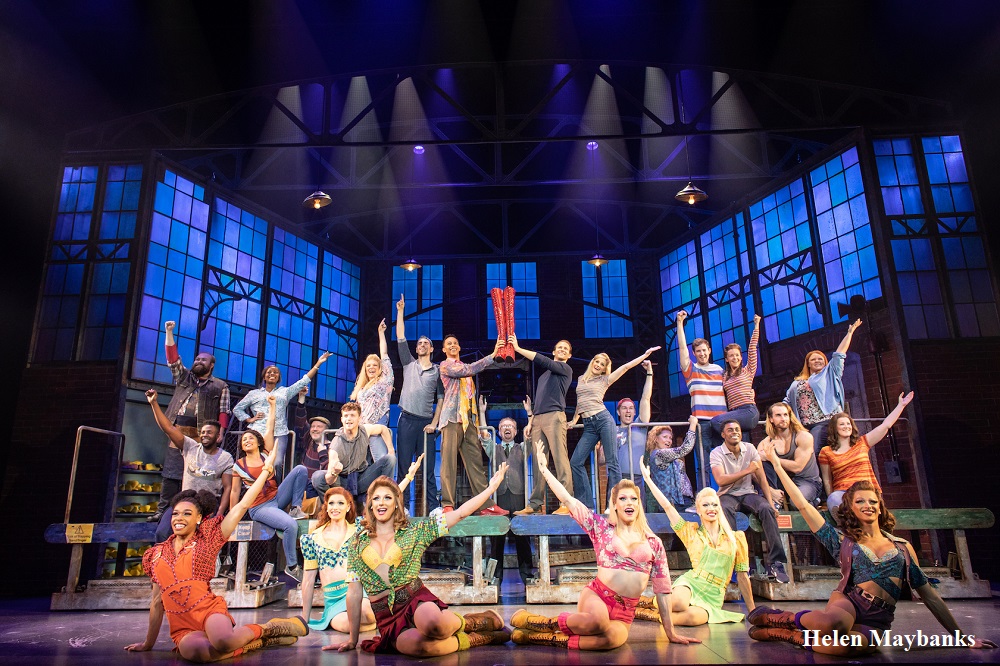 We are dazzled with fabulous colours, glitz and glitter which is gloriously over the top, just as it should be! Callum Francis as Lola produces a magnificent performance and helps to bring the cast up to his level. ‘The Angels’ show off the choreography co-ordinated by Jerry Mitchell and Darren Carnall. Any woman who loves to dance will know that the urge to kick off your heels usually wins, but the cast’s skill at performing some difficult routines is rewarded by a fabulously accomplished show.

The energetic dance routines could sometimes mean the vocal performances suffered a little. There was no performer with an outstanding voice, but the music was so uplifting with songs such as ‘The Most Beautiful Thing in the World’, ‘Land of Lola’, ‘Step One’, ‘Sex is in the Heel’, ‘What a Woman Wants’ and ‘Raise you up/Just be’.

The whole feel of the show is one of fun and the song performed by Lauren (Paula Lane) ‘The History of Wrong Guys’ is so well acted with comedic timing that the audience loved it.

Even though there was a theme of love throughout the musical, the relationships between Charlie, Nicola and Lauren were not explored in any depth and we only really skated on the surface of the subject.

We must not forget the real stars of the show, the boots! There were 216 pairs of shoes/boots worn by the cast and the costumes were magnificent. It must be a busy backstage.

The set design allowed the show to flow easily between the factory and eventually onto the Milan catwalk.

Kinky Boots bursts with effervescence, glitter and glam. No-one would have left the Theatre last night without buzzing.

The final praise must go to Lola who the show belongs to, Callum Francis you are pure gold!

To catch this show at The Opera House, Manchester click here https://www.atgtickets.com/shows/kinky-boots/opera-house-manchester/ The show runs until 1st December 2018.