“For this show we have created a dystopian world in which every one of us is a bride, wedded to society. But what are the terms of this relationship? And can we consider a divorce?” Amit Lahav, Artistic Director.

The Wedding opens on a deceptively small dimly lit set with a curved roof, as if in a bunker. There is a large slide with teddy bears underneath it and one by one, the ensemble drop down the slide (making great use of the surround sound to create the illusion of them travelling down) and trade their own teddy bear for a wedding dress… I have never been more excited for a show. 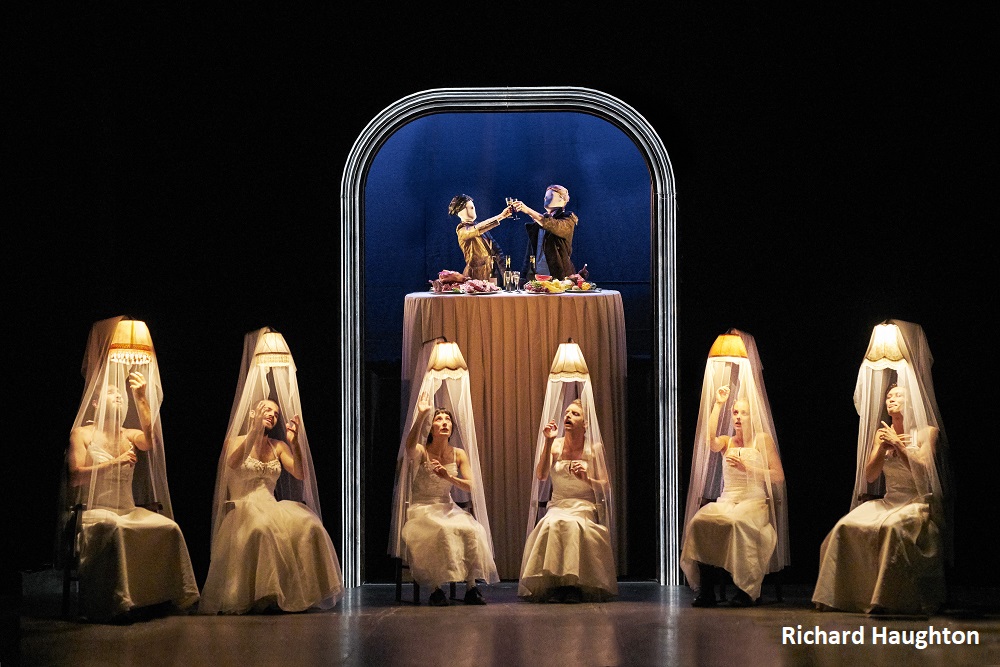 Quickly wedding rituals are over and the fourth wall literally falls down to reveal a much larger space, immersing us into their world of offices, commuting, meetings and contracts. Each character physically trades in their childhood for deliverance into this highly strung corporate life, the wedding dress a symbol of that contract.

The Wedding is not just about our western capitalist society and it’s ability to squash everything to its grey way of life, but also about revolution, growth and love. The characters are incredibly well-developed, especially for a piece that relies so little on words. We follow one character, Sophie, who embodies the spirit of revolution and eventually leads us to (literally) bring down ‘the man’.

Each character speaks in a different European language although there are snippets from further afield, giving The Wedding the feel that it is from and for everywhere. The mesmerising physicality and movement is the real script in The Wedding, with evocation of the story from an exceptional score by Dave Price and sound design by Jonathon Everett. You soon realise you don’t need to understand the words, and actually moving past the words and immersing yourself into each movement and image that is set up makes it much more immersive, the audience is actively encouraged to weave their own interpretations of the narrative into The Wedding.

Highly reminiscent of Kafka’s The Trial and using almost solely Brechtian performance techniques The Wedding is performed with the precision and devotion only a show that’s three years in the making can deliver. There are very clever lighting techniques with torches and props on sticks to create shadowy symbols of oppression and there’s a scene with a suitcase that had the whole room laughing out loud. The whole production is exact but fluid and is said to be different every night.

Very political and heart-wrenchingly current, especially for a Manchester audience, The Wedding addresses issues of ‘outsiders’ to this dystopian world of work and order by exploring homelessness, immigration, refugees, mental health and even touching on terror attacks and how this society demonises the unknown.

The Wedding is a gripping eighty minutes of visceral physical theatre that will leave your heart pounding and you ready to start a revolution. It’s absolutely not to be missed. For tickets please contact the HOME Box Office on 0161 200 1500.