Following on from the huge success of Hope Mill’s previous in-house productions including two subsequent West End transfers the expectations for their latest show, PIPPIN, were sky high. Did they deliver again? Almost!

With music and lyrics by Stephen Schwartz, book by Roger O Hirson and originally directed on Broadway by Bob Fosse PIPPIN brought comedy and spectacle to Hope Mill. In yet another layout I haven’t seen in this remarkable space before a false proscenium arch framed a stage where the superb band under the direction of Zach Flis sat. Reaching out into the audience, a long runway style stage edged with footlights provided the playing area for the entire show, and with an audience on three sides, once again you felt in the heart of the performance throughout. 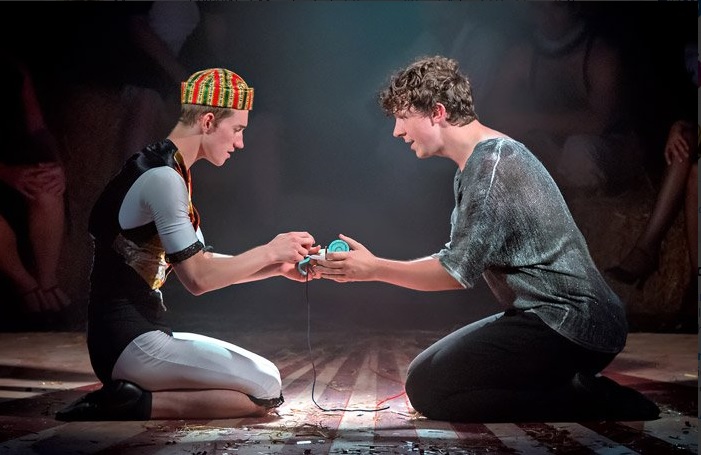 PIPPIN is a fictional account of the life of Pippin (Jonathan Carlton) the hunchback, son of the king Charlemagne (Rhidian Marc) during the Middle Ages. Whilst Pippin is in line to succeed the throne the show follows his search for himself with the help of the Leading Player played wonderfully by Genevieve Nicole.

The relatively small cast of 10 worked hard throughout the show taking on many different roles to support the story as we follow Pippin’s journey. The standout performance for me this evening came from Mairi Barclay who amongst other roles played Pippin’s Mother and Grandmother. Barclay’s comic timing was an absolute joy to watch and you knew there were laughs on their way every time she took to the stage.

Genevieve Nicole as the Leading Player guided not only the audience through the show, but also our leading man steering him through the many trials and tribulations he had to deal with. Nicole was an imposing figure on stage, superbly cast.

Jonathan Carlton as Pippin played the role with a balanced innocence and it was easy to connect with the dilemmas he encountered. His vocals were showcased as he sung ‘Corner of the Sky’ towards the start of the night.

Special mention should go to Marc as the King, Bradley Judge as Pippin’s brother, Lewis and Scott Hayward who played Theo the son of Catherine (Tessa Kadler). All 4 made the roles their own. Director Jonathan O’Boyle has brought the best out of all the cast but especially these 4.

The staging as ever at Hope Mill was a visual treat with countless props being utilised to create the many different scenes on the sparse stage. Full credit for this should go to Maeve Black who was also responsible for designing the simple yet striking costumes. Choreography from Hope Mill co-owner William Whelton was tailored well to the space and at times paid tribute to Bob Fosse.

Sadly, for me tonight the lighting let this production down somewhat. This was a surprise as normally it is superb at this venue. A number of times cast members walked out of light into darkness as they journey downstage to their next mark which was already lit. There were also moments where the show was played in almost complete darkness which robbed you of the chance to see the actors faces during the dialogue.

With a little more attention given to the lighting Hope Mill seem to have another hit show on their hands. Is a third successive West End transfer on the cards following the end of this month long run? Only time will tell, however if I was a betting man, I’d put money on it!