The Carlton Players present Rope, Patrick Hamilton’s story of murder and manners made famous by legendary director Alfred Hitchcock. Directed by Elaine Stewart, this play combines social niceties with an insight into the terrifying mind of a cold, calculating killer to create a tense and thrilling piece of theatre.

The play opens as Wyndham Brandon (Alexander Davies) and Charles Granillo (Greg Vicary) shut up and lock a chest which contains the dead body of their acquaintance Ronald Kentley who they have murdered by strangulation. The murder of Ronald is particularly tragic in that it is practically motiveless and was merely done for the sake of adventure.

In the spirit of continuing this adventure, Brandon and Granillo have arranged a tea party, the guests of which include Ronald’s father, Sir Johnstone Kentley (Barry Prescott) and aunt, Mrs Debenham (Christine Smith). In a particularly cruel twist, the food is served as a buffet laid out on the chest containing the body of Kentley’s dead son. 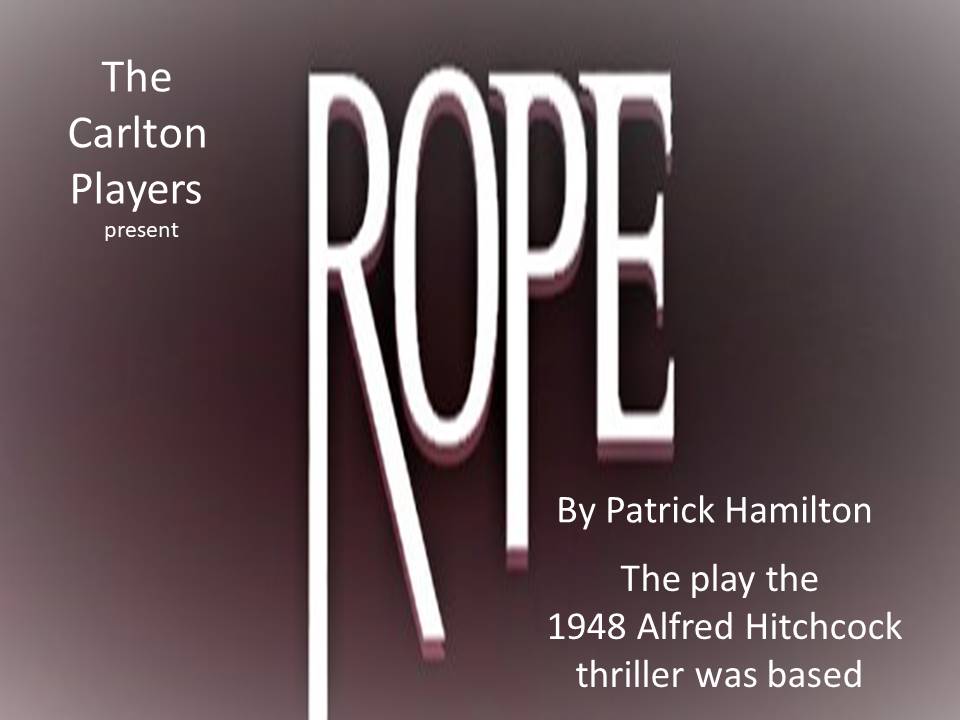 The play takes place entirely in the Brandon and Granillo’s living room. The adjacent room is said to be the dining room and the reason given for eating the buffet off the chest is that the dining room table is covered in books, Brandon recently having inherited a library. This is also the reason he concocts for inviting Kentley, who is a book collector.

The set is made up of beautiful period furniture, with the chest front and centre of the stage, creating a constant reminder of the killing. Costumes are cleverly used to illustrate the social norms of the period with some of the guests being “dressed” and others wearing more informal clothing.

Brandon’s attitude towards the murder is quite nonchalant which contrasts well with Granillo’s crippling guilt. The play opens with a darkened stage and Brandon’s turning on of lights sends Granillo into a hysterical panic. This intelligent use of the lighting as an indication of guilt, or lack thereof, is used throughout with darkness adding to the tension and suspense.

Davies’ performance as the psychopathic and calculating Brandon was flawless. His ability to switch between a blank emotionless face to violent and angry to happy and laid back in a seamless and disturbing way created much of the suspense in this piece.

Vicary’s facial expressions and body language are excellent. A role which is relatively light on dialogue, this was a brilliant performance of a frightened young man in way over his head. He is clearly part of an abusive and controlling relationship with his quick tempered friend which is emphasised by his generally staying towards the back of the stage while Davies occupies the downstage area.

The light-hearted flirtatious relationship between Leila (Sarah Jones) and Kenneth (Dylan James) contrasts nicely with the darker elements of the play. The chemistry between Jones and James is good and provides much of the social comedy, with the values of these two younger characters clashing with the morality of the older characters in the play reminding us that this play is set in a period of great change.

Life after the Great War was disorientating, socially and morally, and this is particularly reflected in the character of Rupert Cadell (Jonathan McGrath), who was injured while fighting. His reflections on the morality of murder and war, when killing is and is not acceptable, and the justice laid out by human society, are both thought provoking and extremely relevant to the story being presented. McGrath’s presence is calm and knowing, creating a sense of disturbing tension.

The uncertainty of the period is beautifully enhanced by the emotional and poignant performance of Prescott. The very image of an upper class gentleman, a short phone call from his wife to advise his son has not returned home as planned, turns Prescott’s portrayal on its head and he shrinks into a caring and loving father, acutely aware of his advanced age and mortality.

This is a slow burning play where tension is built from the opening scene right up until the curtain falls, whose horror is enhanced by the fact that not a drop of blood or gore is ever seen, or needs to be.