Let It Be - Winter Gardens, Blackpool

Before the curtains are raised the audience's attention is drawn to four large sixties style TV screens located top and bottom of each side of the stage which are showing repetitive images of old advertising campaigns, newsreel and questions about The Beatles.

After setting the mood the first thing that hit me when the curtain lifted is the starkness of the set in contrast to today's mega stars ritzy, glitzy shows! Completely true to the early days of The Beatles our new 'Fab Four', Emanuele Angeletti (Paul McCartney), Richard Jordan (John Lennon), John Brosnan (George Harrison), Ben Cullingworth (Ringo Starr), enter onto the stage with nothing but their instruments and raw talent to entertain. Certainly making an effort to resemble their counterparts with wigs and costumes throughout the decades and in particular with impressive Sgt Peppers Lonely Hearts Club era outfits. Vocally they sounded really close to the Beatles when performing songs but the ‘Scouse’ accents slipped many a time in-between. It is also remarkable to learn that such is the attention to detail, Angeletti, a naturally right handed guitarist, taught himself to play left handed just like McCartney. It was also good to see with Angeletti, Jordan and Brosnan displaying talent with their piano playing. Taking a back seat in the shadows is also MD Michael Bramwell assisting on keyboards and recreating the authentic sounds. 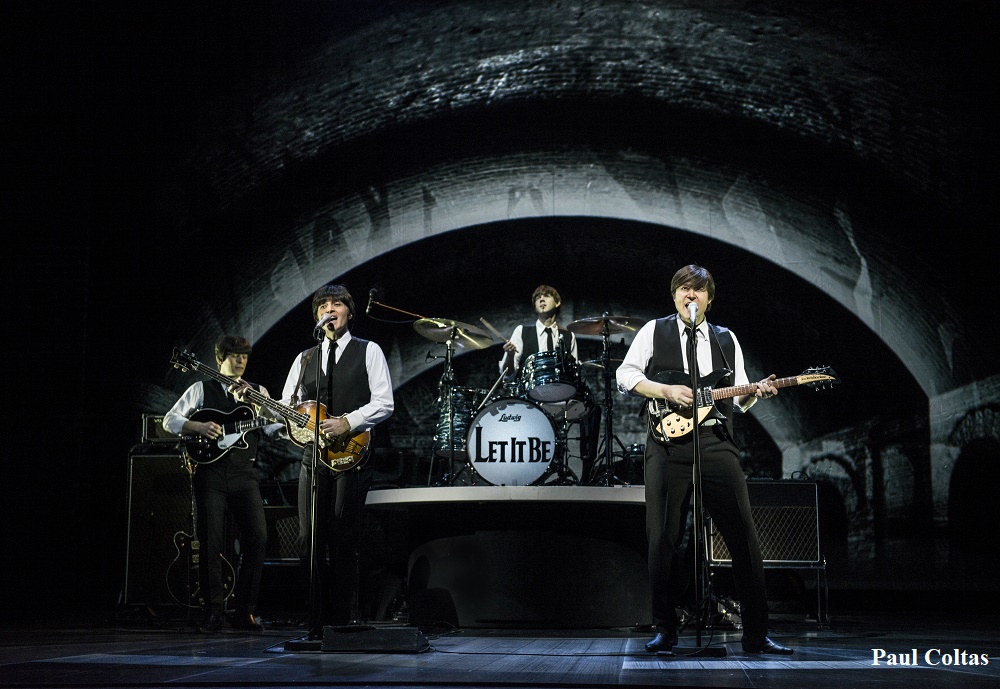 Beginning at a 1963 Royal Variety performance (I'd hoped for the Cavern) The show moves at a fast pace starting with 'She Loves You' and the audience are encouraged to clap along in the cheap seats or rattle their jewellery in the dearer ones. Sadly much of the banter in the show falls flat and I didn't feel any true personalities emerging. People are encouraged to get up and dance several times, much too early in the show for my liking but when the people in front get up there is a ripple effect of the people behind getting up too, not necessarily because they want to get up and dance but because they can't see the show otherwise, (although you can see close up film of the performance on the TV screens it is a poor substitute for watching the actual show). The TV's are put to use to distract whilst the band leave the stage for costume changes but due to the time taken some of the continuity is lost now as people begin to fidget and chat as though it's an interval.

There are great sound effects of screaming audiences as 'Beatlemania' begins and we are now taken to the infamous Shea Stadium where America had never experienced a band like the Beatles before and the mass hysteria that followed them. Following on with the wonderfully recreated psychedelic days of Sgt Pepper and the Magical Mystery tour hits, all four band members are brilliant in their portrayals. The lighting effects are amazing and put much more into use now but the vast amounts of smoke effects often obscured the view for the front rows, not quite so much needed to be effective. Ending the first half with the audience once again on their feet dancing along to hits from the Abbey Road days, remember the infamous zebra crossing album? Yes, once again attention to detail with Angeletti performing barefoot!

Act two is completely different in so much as it never happened in real life.... the long awaited reunion of the Beatles. Giving a glimpse of how it might have possibly been, we are now treated to a much more laid back approach with no costume changes so it flows beautifully. The guys appear much more relaxed in their roles. It is now 1980 and the band reform for Lennon's 40th birthday. Each band member has now had their own individual success and performances from each follow with Lennon's 'Starting Over', Harrison's 'Got My Mind Set On You', Starr’s 'It Don't Come Easy' and 'Band on the Run' from McCartney. Adding to the atmosphere the audience sway along to 'Imagine' using the lights on their mobiles which makes for a really moving moment. Stand out moment of the show was Brosnan's incredible guitar playing with 'While My Guitar Gently Weeps', absolutely amazing.

The second half also has everyone singing along to numerous other iconic songs and as the show is brought to an end the camera is now focused on filming the audience singing along to 'Hey Jude and appearing on the TV screens, everyone loving it.

Let It Be is more than a tribute, less than a musical, no real story but portraying a dream of many.

Tickets available for this show until 25th May 2019  https://www.wintergardensblackpool.co.uk/whats-on/let-it-be