Clive John sounds remarkably like Johnny Cash as he takes us on a musical journey performing songs of the late star including each decade from 50's to 80's but not in any particular order. Now although he dresses in the same style, has more than a passing resemblance in looks, has a band playing the same music and also a female singer introduced as June Carter, (Cashs' singing partner on many duets and also his wife), John on several occasions mentions that he prefers the show to be known as a 'celebration' of Johnny Cash believing this to be more respectful and tasteful and is not a tribute act, I am not sure of the difference here.

The show opens to a scene of a railroad being screened at the back of the stage with train music then straight into 'Folsom Prison Blues' with John dressed in the familiar all black, which follows nicely into what could be regarded as Cashs' signatory tune the 1971 hit  'Man in Black'. Supported by a fabulous three piece band consisting of Darren Bazzoni drums and vocals, Martin Bentley double bass, electric bass and vocals and Nick Davis guitar (doesn't mention vocals in the brochure but he did sing along too!) they produce a perfect recreation of the music of the era and the addition of two brass players for some songs just increases the authentic sound. 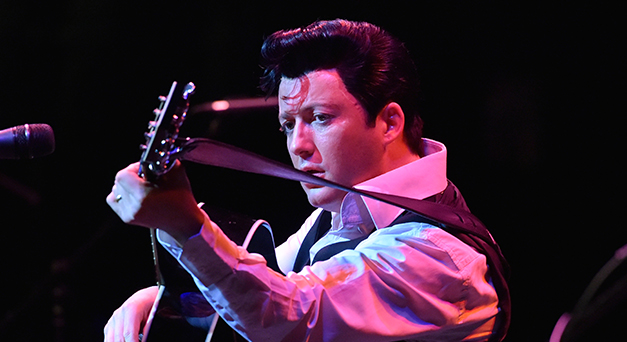 Amanda Stone this evening portrays June Carter and in a duet with John her vibrancy for the role is evident as they perform the classic 'Jackson' together, a song which reached number two on the Country Billboard singles chart in 1967. Stone has an amazing voice and perfectly complements John as did Carter and Cash each other. This song received well deserved rapturous applause as did a beautiful rendition of '40 Shades of Green' a song written by Cash whilst on a trip to Ireland in 1959.

Singing and playing solo John also performed a song which he once sung to a 'captive' audience, inmates of Folsom Prison 'The Long Black Veil'

Stone also played the auto harp as she sang 'Wildwood Flower' attributed to the Carter Family. Throughout the song family photos of the Carters were shown on the screen at the back which gave an insight into the life of the musical family.

Bringing us up to the interval was the well known 'Thing Called Love' which had everyone singing and swaying along to.

The show is cram packed with so many songs and the second half brings us even more firm favourites including duets, cover songs and various styles of music including country, rockabilly, folk, gospel and blues. As the show was approaching the end the audience were on their feet and singing along to 'Ghost Riders in the Sky' a 1979 classic country hit for Cash before the all too soon final rousing song of the evening which was written by June (Carter) Cash for her husband Johnny and features the fabulous brass players too, the brilliant.........well, you will have to go along to a show to find out what this was, but its guaranteed to give you a warm feeling!

Enjoy the tribute....sorry the celebrations!