Girls just wanna have a clean bill of health.

This brand new play by Clementine Bogg-Hargroves is due to show at Tribeca on the 18th-21st July as part of the Greater Manchester Fringe. Kate, the main character, reveals the witty thoughts of an ambitious twenty-something.

She could be a successful writer, if she could just concentrate. Instead, her head is filled with recycling concerns, genius ways to ensnare Sexy Gary, and the persistent fear that her internal organs are against her.

“What am I even doing here? Wasn’t I supposed to be famous and successful by now? Is this it? If this is it, I might as well start getting fat.” Skank 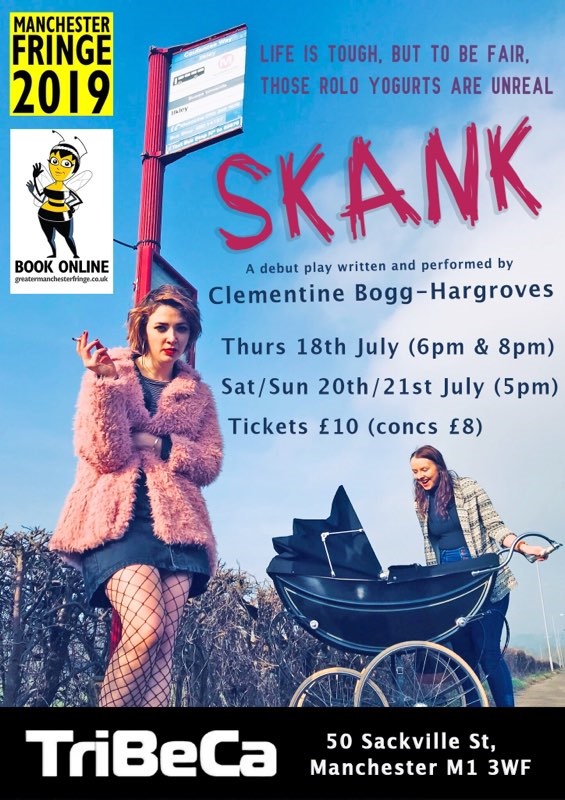 The one woman show is a collaboration between Clementine and her close friend Zoey Barnes. Originally, Clementine intended to write, perform, direct and produce alone, but when Zoey came to do a one-off directing session, it became clear that more hands on deck meant more laughs. With the bulk of the show already written, the two spent the next few weekends fine-tuning, cackling wildly and eating excellently prepared broccoli.

Clem wanted to write something in her own voice that pertained to the world as young people know it right now.

“So I sat down and started to visualise situations I'd been in, especially ones over the last year and just watched them play out in my head until I got to a point which made me laugh or I thought: that'd be funny to show people, and I was off.” Clementine Bogg-Hargroves, 2019

Zoey sees this being the first of many projects the pair work on together, remarking:

“Working on Skank with my best mate has been the best experience because we know exactly how to knock each others’ funny bones and that shows in the final product. At the end of every rehearsal our stomachs ached from laughing and it was so rewarding to show it to our first audience and see people reacting the same way.” Zoey Barnes, 2019

Skank previewed at Hettie’s, Skipton on a ‘Play and Prosecco’ night. The audience put their responses on a feedback board, saying things like: “I feel like there's a bit of Kate in all of us.”, “That office bants hit close to home." and “Moving, funny, very very clever.” So with that one in the bag, Clem got herself spots at the Grassington and Greater Manchester Fringe.

Head to Tribeca on 18th July (6pm & 8pm), 20th July (5pm) or 21st July (5pm) to watch skank. With its fresh humour and relatable characters it is the perfect way to kick your evening off. Canal St is right next door and the girls will be in the bar after shows for a natter. Tickets now available on the GM Fringe website: https://manchesterfringe.eventotron.com/?event=37158