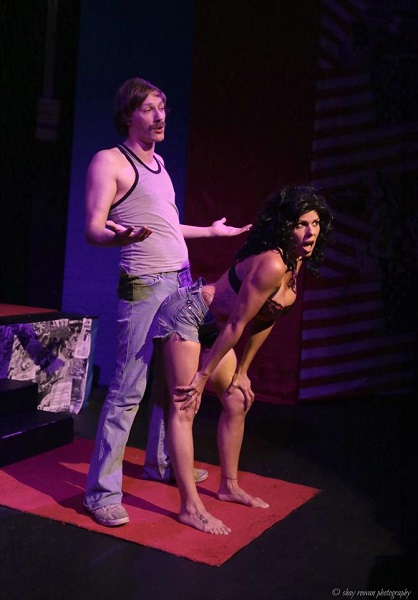 Considering this is a fringe performance, the production level was quite high. There was a screen placed above the stage that short clips were played on to give the audience a sense of where we were and what was happening. Also, the inclusion of popular songs from the 1970s really cemented the fact the play was set 40-odd years ago.

The play explores the theme that fame can’t buy you happiness; Reems becomes depressed about the failure in his relationships. We all see Linda Lovelace (Celine Constantinides) become a victim of domestic violence.

When it comes to recreating the infamous scene from ‘Deep Throat’, it is extremely well done. Vertigo do make a mockery of the scene but I think that’s what was needed, and added to the humour of the show. The scene from the actual movie is replayed at the end of the show and it’s not a million miles away from what Vertigo recreated.

Watching Reems struggle with his alcohol and drug problems was the highlight for me and really showcased Allen’s talents as an actor. You could tell he was 100% dedicated to the role and made some great choices.

The only slight criticism I have is that the performance was a bit on the lengthy side. Considering the Kings Arms lack of air conditioning, I could see some audience members were starting to feel uncomfortable as the show drew on.