William Wordsworth and the Lake District are like bread and butter, naturally going together – and what better place to host the World Premiere of the new play about the English poet, William Wordsworth than Theatre by the Lake in Keswick.

The opening scene, a canvas of natural colours and organic shapes captures the scenery everyone must travel through to get to this theatre in the heart of the Lake District. The space and freedom of this opening scene is quickly confined to the dark, supressing home of Wordsworth in Grasmere, which he shares with his wife Mary, sister Dorothy and sister-in-law Sara.

The set and choreography between the scenes is enchanting, giving a sense of space, time and movement which is reinforced by the tableau style to the opening to several scenes. The characters in place like a classic painting of the 1800s, then instantly moved into the heart of the action. The style is modern yet rooted in the images of art from this period.

While the play, written by Nicholas Pierpan is called William Wordsworth, it could quite easily have been entitled Wordsworth and Coleridge. It tells the story of their friendship and failings – with the arbitration scene in London very reminiscent of a modern-day Jeremy Kyle show. Coleridge, who today may have been diagnosed with bi-polar and described as a self-medicator with alcohol and drugs is the loose cannon in the relationship. Wordsworth is the stable, reliable father figure to his friend. 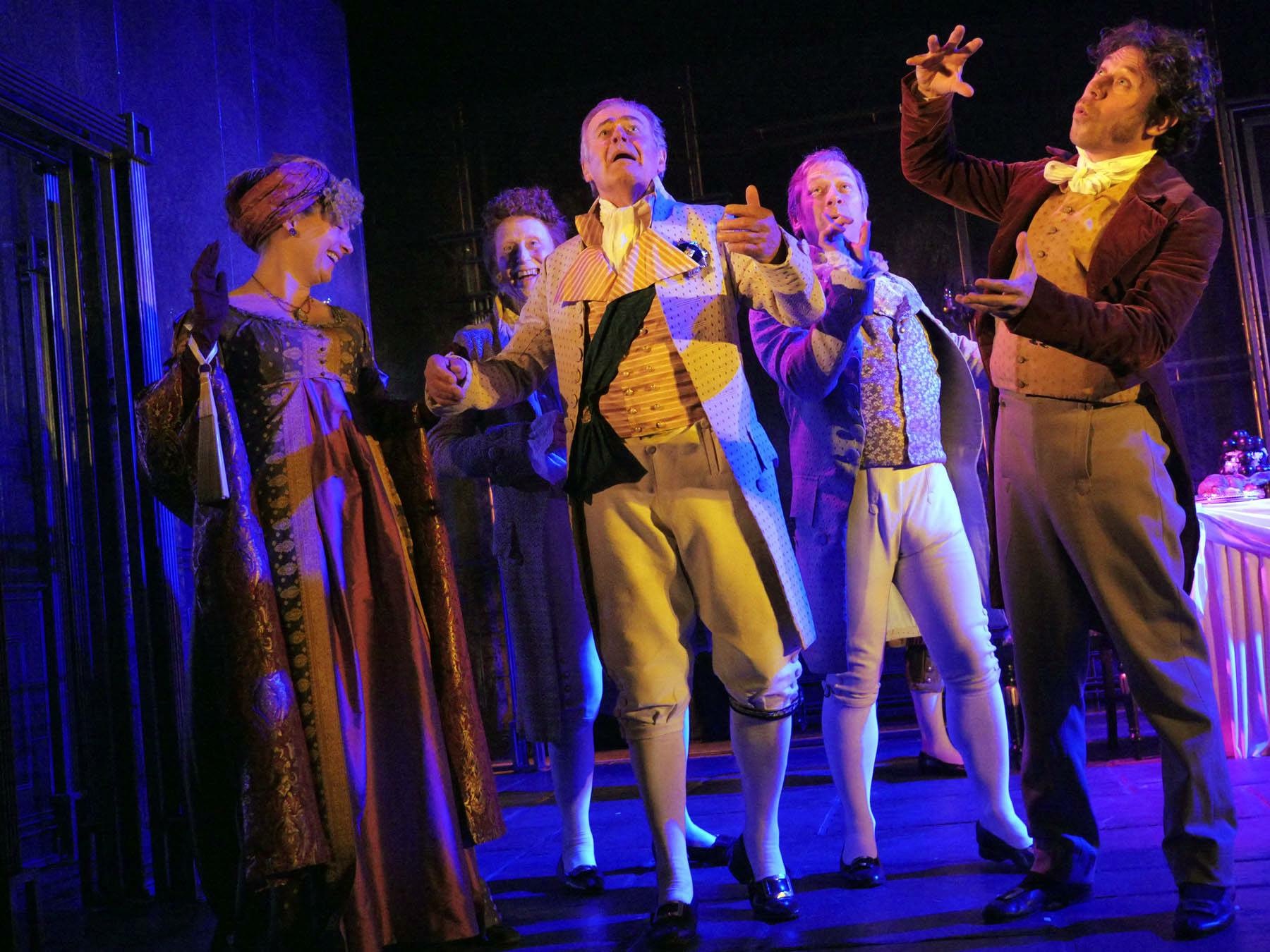 Daniel Abelson as Coleridge is like a firework explosion on the stage, colourful, mesmerising yet filling you with fear, as he dances along the moving tables, makings his proclamations and verbal attacks on Lord Lonsdale.

Terence Wilton as Lonsdale portrays the aristocrat with the self-believe in the rights of the ruling classes to rule without the interference of the plebs, who must act out their demands. The clipped, almost autonomous delivery of his lines and the juxtaposition of them to the passionate words of Coleridge and Wordsworth show the great divide in the views of the nation at the time – and have echoes of political emotions of today.

This play is a great reminder of the radical nature of Wordsworth, Coleridge and the Lakeland writers – labelled as idlers, rebel rousers and trouble makers. Today Wordsworth is part of our establishment that he rallied against. Ironic that he felt much of his work too radical to be published in his lifetime. Also amusing is his belief that you couldn’t find the truth of poetry by studying the author – however this play is evidence that it can lead you back to their original works and intentions.

The death of his two children is covered in this new work, though his wife is never seen. Like the records and image of his life, his sister Dorothy takes the female lead role in his story.

The level of destitution he places his family in due to his own belief in the words of poetry did not leave Wordsworth without concern and caring for others – as the interaction with the beggar shows. No matter how poor he was, there was always someone worse off than himself, even in grief.

Wordsworth’s torment between taking a government post with Lonsdale or gambling on the financial security of his family with Coleridge was well delivered by John Sackville who plays Wordsworth in this production.

There are some beautifully crafted lines in this play, and a number of amusing quips that lead the audience to laughter, however a tighter script would have made the production stronger. Several of the long monologues interrupted the flow of the narrative of the play, and would have added to the enjoyment with their removal, especially in the second part of the play. A small issue within a greater enjoyable production.

This is a beautifully stylised production, with a fresh new feel for Theatre by the Lake.

However, the closing scene leaves the last words to the women in his life and felt a little anti-climactic - though it left me wanting to know more about this Lakeland poet.

On the way-out of the theatre I was happy to take a leaflet about visiting Wordsworth House and gardens, information on the Wordsworth Trust and Rydale. My interest in this poet has been ignited – the production has inspired me, another success for Theatre by the Lake.

William Wordsworth runs in the Main House, Theatre by the Lake until April 22nd, 2017. https://www.theatrebythelake.com/