It's 4th July. American Independence Day. And it's stifling.

The venue is a smaller studio theatre hidden in the Lowry, but perfectly suited to a lower key, one act performance such as Mancunian writer Mick Cooper's "Stuff". The stage set is minimal: black drapes, a settee, a coffee table and a rug. It's a blisteringly hot evening and the house is full. And airless.

The play opens with a brief burst of Frankie Goes to Hollywood's Relax. For those of us old enough to remember, this was the record that BBC DJ Mike Read banned from the airwaves because of its alleged "obscene content". The nature of the lyric makes this a cheeky way to begin; in my mind it's setting us up for the innuendo and smut I'm anticipating. I'm expecting to like it and find it funny, and I'm expecting my partner to find it mildly offensive and childishly tedious. You see, it involves a married couple, Toby and Jess, who can't conceive due to Toby's sperm motility. However, they're still trying to have a baby the old fashioned way, but with the addition of ardour-dampening ovulation charts and a range of pamphlets, special diet, no alcohol and loose fitting trousers. From the off-set it is clear Toby is finding it difficult, stressful and emasculating, then in bounces friend, Xav, terminally ill and generously offering his sperm as a gift, the "stuff" of the title

Understandably, this causes issues for the couple. Jess wants to go ahead; Toby is reluctant and Xav's upbeat clowning irritates them both. This is a man clearly in denial, but it's effectively portrayed. There are moments when his brain tumour causes him to struggle for words or forget something and these are genuinely touching.

Interestingly, all the cast are Mancunians or Northerners and use strong northern accents, giving the piece a sense of place. Peter Ash (Toby) has done the usual TVs and an 18 month stint in War Horse; Eve Burley (Jess) has done numerous TVs; stealing tonight's show is Karl Greenwood (Xav) previously from Blood Brothers.

It's a difficult show to judge as it's both humorous and poignant. I found the premise interesting; it is a confined and claustrophobic human drama and not the cess pit of innuendo I was expecting. Well, there is a smattering, but it wasn't over the top. The main thrust of the story is the human struggle between the three. Xav wants them to accept his sperm, it is eventually revealed, because he doesn't want them to forget him and underneath the bravado he is terrified of dying, which creates an emotional tension in the studio.

If I'm honest, certain sections of the play I couldn't see the need for, such as the lengthy "poker face" contest, in which the two men battle to see who is the best at lying; it just seemed irrelevant to the plot and simply there to fill the time. With a running time of only an hour every moment needs to count, such as Xav trying to explain the principles of IVF treatment using a range of savoury dips. While Xav is fun to watch, and Greenwood's portrayal is very watchable, in reality as your friend Xav would severely test your patience. As he does with Toby, who ultimately has a meltdown, which I found to be realistic and well-portrayed.

The characters reach a resolve, which works for them, but there are no rights or wrongs, and no moralising. In that situation myself I would probably have gone a different way.

Overall, I feel "Stuff" is slightly lacking in relevant content for its allotted time, but I've come away surprised by this reflective piece with its natural character-driven moments of humour that was rarely ever close to the knuckle. 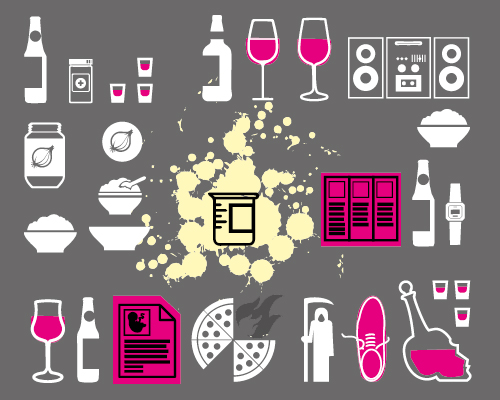