The title of Mozart’s opera is one of the few that are never rendered into English when the piece is performed. “Women – they’re all like that” would be a close translation, and that maybe grates on twenty-first century ears. It also suggests that the comedic tone will be coarser than it actually is. Opera North’s lively production, now touring, steers a clever course, avoiding slapstick on the one hand, and sentimentality on the other.

The visually startling set, designed by Thomas Hoheisel, is a key element in establishing this production’s atmosphere. As the curtain rises, we are presented with what seems to be a giant wooden box, with huge cut-out lenses, which we soon realise is a camera obscura. This opens out to reveal a monochrome interior, which is where all the action takes place. At the beginning, Don Alfonso, played with wry humour by William Dazeley, stands outside the construction, and invites the orchestra to play: he is the detached observer of the mind games that will be played out within the box.

The two sisters, Fiordiligi (Máire Flavin) and Dorabella (Helen Sharman) are indistinguishable when we first see them, but soon we note their differing personalities as they find themselves the unknowing guinea-pigs in Don Alfonso’s experiment to prove the fickle nature of women. Their soldier lovers, Gugliemo (Gavan Ring) and Ferrando (Nicholas Watts) are nicely distinguished too, with Ring giving Gugliemo a brash bravado, and Watts providing Ferrando with a plaintive vulnerability. The role of the maid Despina was brilliantly handled by Ellie Laugharne, whose energy and humour drove the action forward, particularly when she is disguised as the doctor as part of Don Alfonso’s deception. In her maid’s outfit, she wears a red hairpin, sticking out like horns, and hinting at the devilment she urges on her employers. 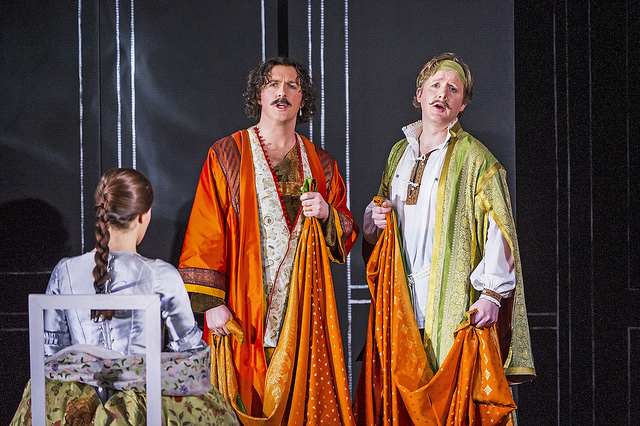 With Mozart’s glorious tunes, and Da Ponte’s witty libretto (here sung in English, in an equally witty version by an uncredited translator), it’s difficult to see how Così Fan Tutte can fail. That it succeeds as well as it does here is tribute to a sparkling cast, directed with vigour by Tim Albery, working hard for each other in a series of vibrant set pieces, particularly the sextet in the first act, where the disguised soldiers return to woo the women, and the finale, where all of them agree to accept the vicissitudes of life.

Tim Albery’s production, whilst providing many comic moments, nonetheless manages to explore the darker recesses of human nature hinted at in Don Alfonso’s philosophy. Fiordiligi’s second act aria in which she begs forgiveness is rendered with real poignancy by Máire Flavin, and Ferrando’s despair when he discovers that Dorabella has been tempted is invested with genuine emotion by Nicholas Watts.

The Opera North orchestra, conducted by Anthony Kraus, performed with plenty of attack, complementing the busyness of the action. Charlotte Forrest’s fortepiano in the recitative was a delight, really highlighting the characters’ words, and helping to propel the narrative.

The sublime pairing of Mozart and Da Ponte will always provide marvellous entertainment, but this production works well on every level, helped by a consistent and highly original vision of the late eighteenth-century world. This is a genuine treat for any fan, and would surely convert many who find opera too remote.