Following the success of You Can't Take It With You (2011) and Too Clever by Half (2013) Told by an Idiot have returned to the Royal Exchange Manchester for a third year running with this classic ghost story, done (of course) with an Idiot twist!

A group of passengers are left stranded at remote Fal Vale railway station, facing the prospect of a night in the waiting room. But when the old stationmaster (Amanda Hadingue) warns them about the phantom train that haunts the tracks after dark, the evening starts to take one chilling turn after another.

There couldn’t be a more perfect venue for this hilarious and at times scary comedy thriller which director Paul Hunter says is not usually performed in the round. On the basis of tonight’s show the future of this play should be firmly established in the round. A very simple set with some clever illusions is all the backdrop needed as the actors shine in this production.

The cast are introduced to the audience by way of a radio play complete with sound effects that the cast attempt to recreate in person as it is broadcast. From early on the cast interact with audience members on the front row as if they too were stranded in the waiting room.

Tempers flare as the evening progresses and Teddie attempts to keep spirits up by fooling about and producing a bottle of Brandy which only goes to infuriate the two couples although Miss Jones makes the most of the drink.

The arrival of Julia (Amanda Hadingue), a seemingly unstable woman obsessed by the phantom train serves to instil more fear into the gathered group as the show hurtles towards the interval. The passing of the train through the station is exceptionally well done with fantastic sound design.

The second half begins with the parrot giving the audience a recap of all that had happened thus far. This, although funny in places seemed to be out of place in respect to the rest of the performance.

John (Femi Elufowoju Jr) a Doctor and Herbert (Javier Marzan) attempt to convince Julia to leave the station without any success as the plot takes many a twist.

As the show draws to a close we learn just who these strangers flung together that night really are and why they are there. The final moments of the performance are beautifully staged as the train finally departs the station.

The Ghost Train continues at The Royal Exchange until 20th June providing more laughs than frights from a superb cast and technical team. 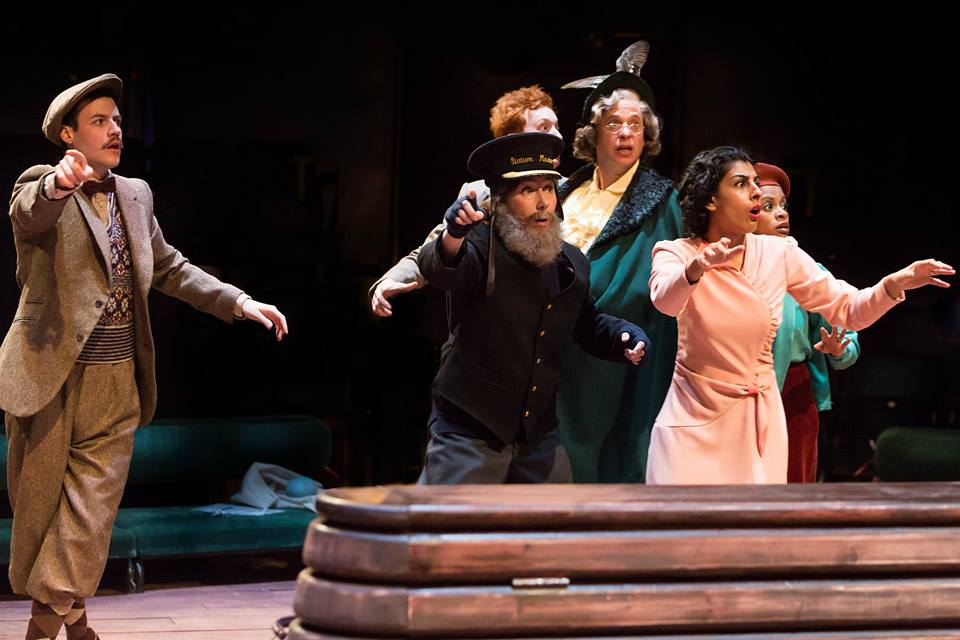