Shrek the musical is based on the 1991 DreamWorks animation film. It follows the story of an ogre named Shrek and his trusty steed, Donkey on their quest to rescue the beautiful Princess Fiona. Meeting many misfit fairytail characters along the way, a lovesick dragon plus the diminutive Lord Farquuad, this is a big, bright Musical comedy. With book and lyrics by David Lindsay-Abaire and music by Jeanine Tesori, this musical was originally produced in Broadway and opened in December 2008.

From the get go you could feel the excitement from the audience, which was made up of a wide range of ages, waiting to see if this well loved animation could be brought to life before our eyes. We were not disappointed.

The show opened with Shrek played by Dean Chisnall. Chisnall plays this character perfectly with the famous Scottish accent and the cheeky ogre humour to go with it. The costume and make up for this character needs mentioning as this is no ordinary character and the transformation to a giant ogre is fantastic. Chisnall has his job cutout trying to portray emotions through all this make up and prosthetics but with the use of just his eyes and mouth you were able to read every emotion he was putting across. 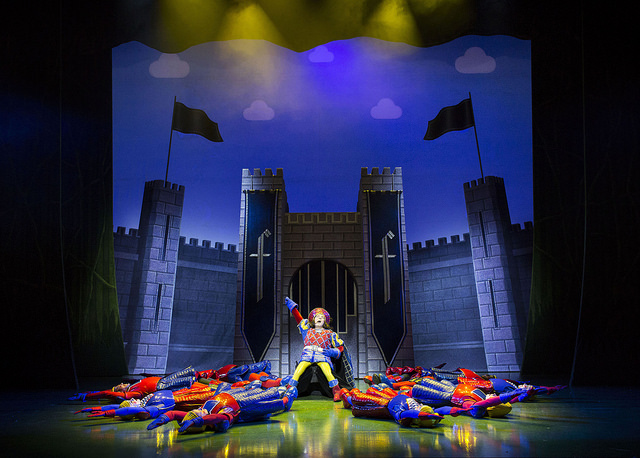 Along the journey we meet Donkey played by Idriss Kargbo. How do you make a donkey come alive? This is something Kargbo does with ease, with amazing comic timing and fantastic dance moves to boot, a difficult job I'm sure in a padded donkey suit. A pleasant surprise was Donkey's song Don't Let Me Go, which had been removed from the London production, returned to the show with an updated version.

Bronté Barbé as the sassy Princess with attitude, Fiona, shows she's a triple threat with this faultless performance. Stunning voice, wonderful dancing and top notch acting. The transformation in the wedding scene turning her from Princess to ogre was visually stunning and was done with ease with a costume and makeup change within one minute.

The biggest laughs of the night were created by Gerard Carey as Lord Farquuad. Carey spent the whole performance on his knees (the character is meant to be only four foot). With witty songs, including The Ballad of Farquuad, hilarious comedy moments and many innuendos, it was Carey who stole the show and took the performance to a completely different level.

The set for this show was wonderful, one minute being in a deep dark forest, the next transported to Duloc and Farquaad’s castle. Lighting also played a huge part in this show and created a great atmosphere, sometimes magic (especially in transformation scenes) along the way. This was done to the highest standard and added to the fluidity of the show.

At one point we had a giant dragon taking up the majority of the stage, being mastered by 4 puppeteers who worked so well together you ended up believing this dragon really was singing and flying around the stage. Voiced by Candace Furbert, the vocals were awesome, full of fire and well controlled riffs.

Not leaving out the other 18 performers who work extremely hard with huge voices and fantastic dance moves to pull this whole show together. With wonderful, comedic tributes to other shows including Dirty Dancing (Nobody put Farquuad in the corner), Wicked, Lion King and the 'Freak Flag' (a nod to Les Mis).

What I found extraordinary was that they chose four girls from Liverpool to play the parts of Young Fiona and Young Shrek, really showcasing the talent from the local areas and giving these children a chance they may not have been given elsewhere.

Directed by Nigel Harman, who played the role of Lord Farquuad in the London production, you could see he had a fine eye for detail and injecting humour into his whole cast as they all looked like they were having a ball on stage.

The choreography by Josh Prince was inventive and very fresh and delivered with 100% energy all throughout. The tap dancing 'rat' routine opening act two was energetic and showed how talented the whole cast were

Dave Rose led a wonderful Orchestra who sounded perfect from beginning to end. With big songs such as Big Bright Beautiful World, What's Up Duloc, I Think I Got You Beat and the finale of I'm A Believer, the whole audience left with sore hands from clapping and sore ribs from laughing.

A wonderful story transformed into an even more wonderful musical.