Happily Ever After at Z-Arts

Once upon a time, in kingdom on top of the highest mountain in all the land, there lived a grouchy Queen, and her son, the Prince. The Prince was always getting in to trouble for slouching, for running, for burping and dancing and not behaving very princely at all! His mother decided that he needed to marry the perfect princess to finally become a grown-up and a proper King. Hundreds of princesses came from all over the kingdom, but the Prince wasn't impressed by any of them... Until one princess arrived accompanied by her brother

Happily Ever After is a joyous 45 minute piece of live theatre which relies solely on music and mime and is truly a beautiful piece of theatre aimed at younger audiences.

Created by Action Transport Theatre and LGBT Youth North West in late 2014, Happily Ever After is inspired by Dutch children’s book ‘King and King’ by Linda De Haan and Stern Nijland - banned and challenged in some countries – which tells the story of two princes who fall in love and live happily ever after. This ground-breaking show toured to eight primary schools across North West in autumn 2014 and has been developed into a full touring show for theatres in 2015.

The simple yet striking set by Rebecca Palmer welcomes you to the royal palace as you enter the auditorium being cleaned by the royal staff prior to the show beginning. The whole story is conveyed by just 4 actors, two of which play a number of different roles. Eye catching yet practical costumes convey the regality of the piece.

The precise direction by Action Transport Theatre’s artistic director, Nina Hajiyanni is a breath of fresh air as the cast Ady Thompson, Paul Curley, Eve Shotton and Bruno Mendes tackle the subject of homophobia head on.

I believe every child should get to see this captivating piece of theatre as part of their education which helps breaks down boundaries and promote acceptance in this ever changing world. 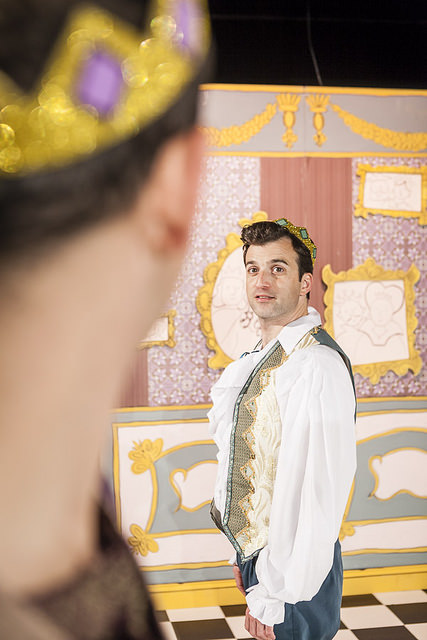