How Do You Solve a Problem Like Maria? The answer is simple, you cast Lucy O'Byrne as her! As novice nun Maria, O'Byrne was born to take on this role and is spectacular throughout, charming the audience from the moment she dances onto the stage. After coming second in BBC's The Voice in 2015, this young lady from Dublin is surely looking at a long and successful future in musical theatre if tonight's performance is anything to go by. O'Byrne has magnificent stage presence and is immediately likeable as Maria, performing with charm and innocence and bringing humour too. She has a wonderful and faultless singing voice and as most people will be familiar with the film 'The Sound of Music' starring Julie Andrews as Maria, high expectations were expected and delivered.

The first of the fabulous stage scenes is set in the convent and from the opening bars of the memorable song 'How D You Solve A Problem Like Maria' performed lovingly by the nuns and followed by O'Byrne with the title song, 'The Sound of Music' you know that this stage production by Bill Kenwright is a winner. After discussions over Maria, the nuns decide she needs to experience more of life before her final vows and send her as governess to the seven Von Trapp children who are being brought up by their regimented father Captain von Trapp and portrayed perfectly by Andrew Lancel (Coronation Streets Frank Foster). He shows little emotion or love to his children and summons them and the household by a series of whistles. He is intent on wooing wealthy Elsa Schraeder the stunningly beautiful Lucy Van Gasse, but that was before the arrival of Maria! Condensed to the stage the love blossoming between the Captain and the novice nun is very quick and I would have liked to have seen that stretched out longer. 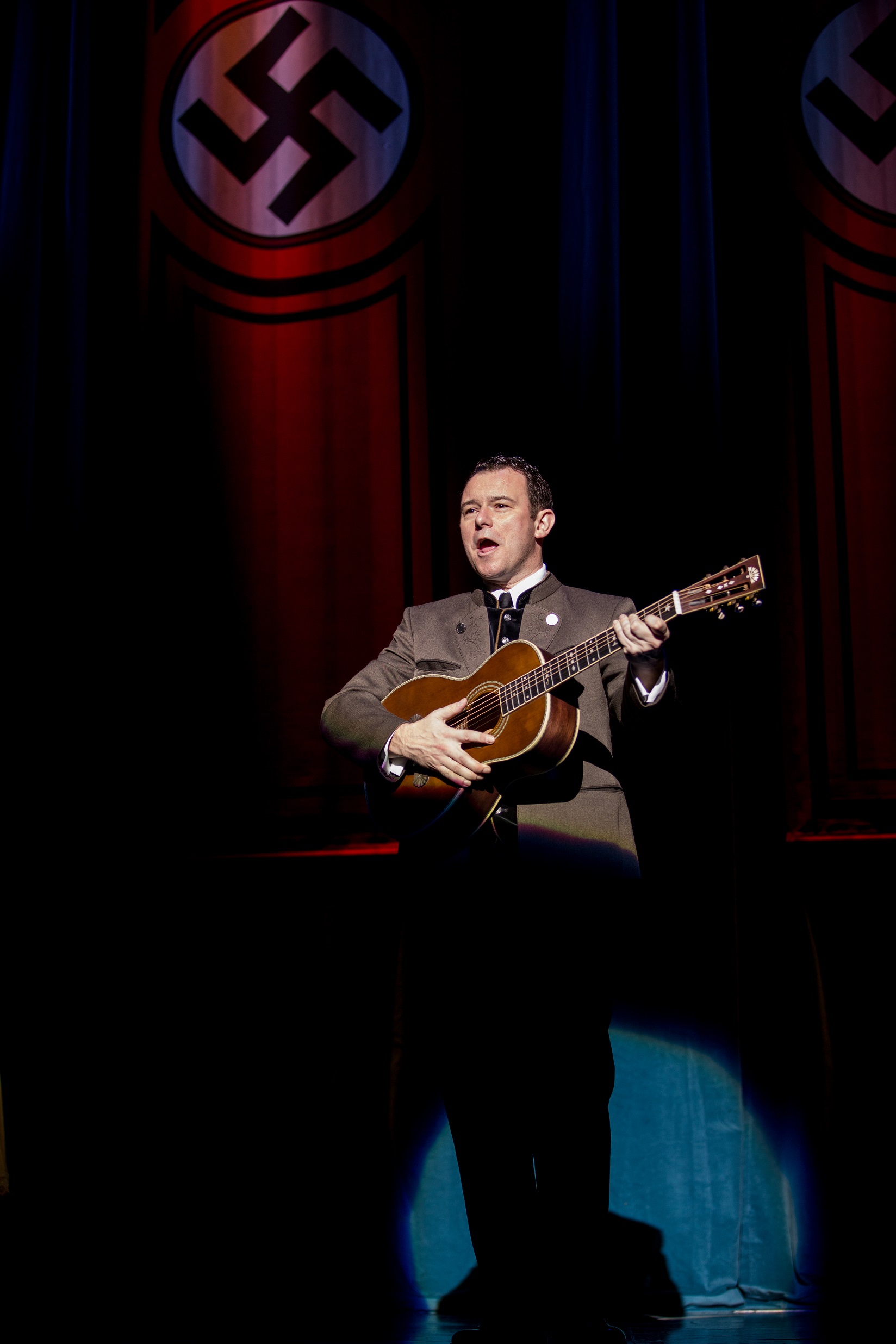 Winning the children over with her love of music, 'Do -Re- Mi' is a delight to hear and see performed in the elegant hallway with sweeping staircase, of the Von Trapp family home. Designed by Gary McCann, scene changes are smooth and lavish and work very well throughout the show taking us from convent to the Austrian mountains. Following on with a beautiful dance routine, a credit to choreographer Bill Deamer and the song 'Sixteen Going on Seventeen' with Annie Holland as Liesl, the eldest of the Von Trapp children and her beau Rolf (Kane Verrall) the German telegram boy, they both give an endearing performance of young love.

The other six youngsters have big roles to fill and from the youngest, Talia Etherington as cute Gretl to the eldest, Kai Cooper as Friedrich, all of the children are outstanding with their singing and never putting a foot out of line with their choreographed routines. 'So Long, Farewell' was another joy to see performed by them and it is lovely to see this talent at such a young age.

The final song of the first act was absolutely breathtaking and brought many of the audience to their feet... 'Climb Ev'ry Mountain’ surely cannot ever have been performed as superbly, by anyone, other than Jan Hartly as Mother Abbess, simply stunning.

The music of Rodgers and Hammerstein under the direction of Tim Whiting was given full justice by the 11 piece orchestra and during the interval had the audience singing along to 'Do-Re-Mi' and the 'Lonely Goatherd' before the second act even started!

The second half concentrates on the invasion of Germany in Austria and the need for the family to escape from the Third Reich and is tactfully handled. A friend of Captain von Trapp, Max Detweiler, is keen for the family to perform at a festival and although not wishing for his family to take part the Captain realises this could be the possible place for them to make their escape. Touching scenes follow with Lisle and Rolf and a moving rendition of 'Eidelweiss' from the Captain, accompanied by Maria and the children. Guaranteed to bring tears to your eyes.

As expected and deservedly the evening ends to a standing ovation and thunderous applause from an almost capacity audience and this on a Tuesday!

This is a wonderful production with a great cast and fabulous music and lighting, spectacular scenery and amazing costumes and I urge you to 'Climb Ev'ry Mountain' to get to see this, for 'The Sound of Music' will leave you feeling 'Sixteen Going on Seventeen' and is one you will not want to say 'So Long, Farewell' to. (I can hear the groans now for this reviewer!!)

The show continues until Saturday 9th July 2016 at Blackpool. For further information and tickets contact http://www.wintergardensblackpool.co.uk/movies/the-sound-of-music/