The Regent Theatre was packed full last night with people excited two of the countries most loved dancers, Vincent Simone and Flavia Cacace who are world renowned Argentine Tango champions. They have toured the country with several shows and the last tango is their latest tour. I personally am a huge Strictly Come Dancing Fan and have seen other professionals from the show performing at the theatre in the past. This show was unlike any of the others I have watched as it followed the story of two young lovers and took you through all the good times and the bad they had faced. This brought great beauty and class to the show. Neither Vincent nor Flavia spoke a word throughout the show but truthfully it wasn’t needed.

On entering the theatre we saw a very crowded stage set out like a loft space with an old arm chair being the central point of focus on the stage. The show opened with Teddy Kempner who played the character of George and has actually been one of my favourite musical theatre actors since I saw him in Never Forget at the Regent Theatre several years ago. Kempner has the ability to hold the audience in his hand and make you laugh or cry with him. This performance was heart wreathing as he watched his younger self portrayed by Vincent recreate all of his fond and not so fond memories usually from the comfort of his arm chair. Every point that the pair were supposed to be in union with their moves they were at it was gorgeous to watch this on the stage. 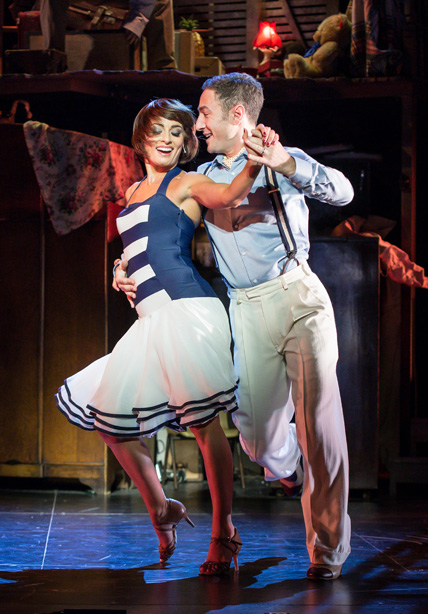 Matthew Gent provided us with most of the vocals of the night his voice was in a word, stunning. Every song he sang was so clear, crisp and carefree. A personal favourite vocal from him last night was At Last his Vocal accompanied by Vincent and Flavia’s simply mesmerising dance routine was match made in heaven and was defiantly a stand out performance. Another favourite for me was the last dance before the bows Autumn Leaves. This was as such the Last tango between the portrayed lovers as Flavia’s unnamed character had lost her life. This brought several tears to my eyes it was breath-taking, heart-breaking and earth shattering. The emotion in this piece was just unreal, every movement you felt the pain and lose being felt by George. I never thought that a dance routine could overwhelm me so much but it was just stunning.

The ensemble in the piece were wonderful they danced beautifully throughout and gave us a treat for the eyes when they performed Beyond the Sea. The dance was airy and light and the movement that came from the costumes was spectacular. If I didn’t know any better I would have thought them Strictly professionals too.

Now for Vincent and Flavia, when they graced the stage the crowd went into uproar why? Because two of the greatest dancers in Strictly history graced our presence. They schooled the audience on technique and stage presence whenever they were on stage my eyes were just locked on them both. Their chemistry is unmistakable and they were faultless. Every routine they did together just got better and better throughout the night with one of their last being the before mentioned Autumn Leaves.

The only downside to the show was I wanted to see more of Vincent and Flavia! The show just wasn’t long enough we were out by 9:30pm and that had included an interval I’d love it that much I just wanted more. The story was quick paced and flowed well overall it was a beautifully enchanting show. The direction by Karen Bruce was clear and helped the story along.