Inala is described as 'a zulu ballet...an exhilarating fusion of South African and Western cultures'.   This it certainly is, comprising the nine singers who make up Ladysmith Black Mambazo and nine dancers from The Royal Ballet and Rambert.

The curtain goes up and the whole cast are on stage, posed in darkness and silence. They then begin an eerily silent dance which is spookily effective, even without music.   Gentle piano music then begins and the ballet dancers begin to dance. Right from the start, you cannot help but be amazed by their stamina and strength which just appears to be so effortless (but I'm sure it isn't!).

We then move seamlessly into a more upbeat piece of music which instantly grabs you with its uplifting beat.   Ladysmith Black Mambazo begin to sing along and their sheer joy shines through and it's rather infectious.

I won't pretend that I understood the story which was unfolding on stage but to be honest, you don’t really need to understand it. The dancing is quite spellbinding in parts and it is quite a joy to watch the singers, particularly when they too begin their own choreographed movements all together.

I'm not a huge fan of contemporary dance and there was a lot of this woven into the ballet but it just seemed to work for this show.   Even some of the more ungainly moves were done seamlessly and effortlessly and it all flowed very well. The athleticism of the dancers is really quite breathtaking.

To my disappointment, the upbeat songs were not as prolific as the slower songs and some of the slower songs did seem to last quite a long time.   It was still a spectacle to watch but for me, not as engaging as the more upbeat numbers.

The lighting was simple but effective, at times spotlighting the singers individually as they stood in a semi-circle. Combined with them standing silently while the tribal drum beat continued, it was quite eerie yet exciting.   Simple choreography at times proved to be very effective indeed - at one point most of the cast stood in a line while a dancer performed in front of them but they very gradually started to move backwards, one pronounced step at a time. Sounds a bit non-descript perhaps but it worked.

I liked the fact that when all the dancers were on the stage with Ladysmith Black Mambazo, the two different disciplines performed symbiotically, barely acknowledging the other's presence yet never colliding or coming into contact. At other times, the singers would perform with the dancers, this was fun to watch as they really threw themselves into it and they can certainly do high kicks!

On the more upbeat numbers, the dancing was happy and exuberant and I did find these more entertaining than the slower ones.

There were some moments of humour:   at one point everyone was in a line and each person came forward and did some amazing moves - when it was the turn of each member of the Ladysmith Black Mambazo, most of them rose to the challenge, one man performing an amazing back flip. When we got to the last man in the line, he came forward and did a "can't be bothered" hand gesture which prompted a big laugh from the audience.

The dancing was amazing, as was the singing and the overall performance itself.   I came out not knowing quite what I'd seen but as previously stated, it really doesn't matter whether you understand the story or not.   It's all in the performance. 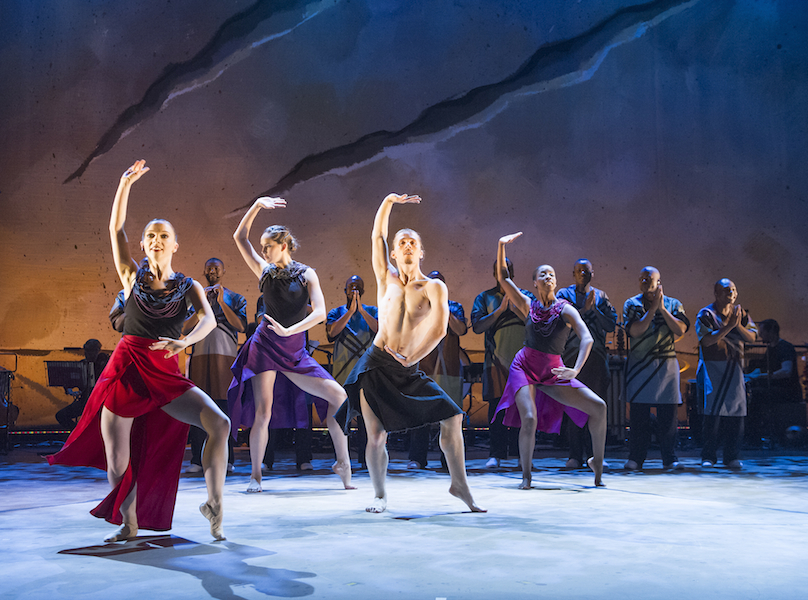