To commemorate the centenary of World War I, following the success of sell-out preview performances in 2014, the local duo behind this truly touching piece have been hard at work to adapt and improve the masterpiece that is The Tree of War.

Staged to the public in the same venue that it was previewed - St Nicholas’ Church in Burnage, Manchester - Oliver Mills and Rachel Mann’s creation follows the journey of Anna who, fearing the loss of her ‘story tree’ and the news that war has broken out in the Falklands, questions her Grandpa Bert about his time in the Great War. Through their eyes we meet a young Bert and his best pal Greville as they make their triumphant journey into the trenches. We also gain insight from the comrades they meet along the way, and the trials the war presents then with, each character becoming a root in The Tree of War - the very same tree that, 60 years on, Anna is trying to save.

With light-hearted humour and tear-jerking moments weaved throughout, no musical is complete without carefully composed emotive music to set the scene and top off the suspense, drama and beauty of the powerful stories being told.

Established poet Rachel and York University Music graduate Ollie joined forces a few years ago when they decided to stage Jesus Christ Superstar in main church space, utilising the properties and character of the building. To the impressive surprise of the congregation and whole community they founded something very special and challenged themselves to take on the task of bringing the community together and empowering the potential within it to produce high quality theatre in a venue fit for arts and expression.

With a shared passion for their church and music, Ollie was appointed MD and set up the Burnage community choir, which was later to feature in his originally written version of A Christmas Carol - again to much acclaim. In April last year the two decided to write a new musical and put pen to paper in June that year and the magic commenced, albeit long-distance. In September 2014 the pair previewed ‘version one’ - an hour and a quarter version - of the show, casting old faces and helping hands from previous projects and members of the community from all walks of life who wanted to share their passion. Fast-forward to now and here we are in the midst of rehearsals for the forthcoming ‘version 2.0’ of the 2 hour treat to be performed this September a year on from it’s debut.

With a live 12-piece orchestra and cast of seasoned professionals and local budding talents; some in training, others not, this show looks to be a real gem in Manchester’s thriving arts scene, with plans to make it available as book and score for other societies to access and attempt. Oliver and Rachel will certainly reunite for another project in the future but Ollie joked that his next venture would hopefully be a smaller and more manageable show.

Tickets for the show, running from Tue 15th - Sat 19th September, are available from HERE and details are also on their website: www.thetreeofwar.co.uk as well as their social media channels (The Tree of War and @thetreeofwar).

A free hour-long preview of the show will be performed at Manchester Cathedral on Saturday 22nd August from 3pm. 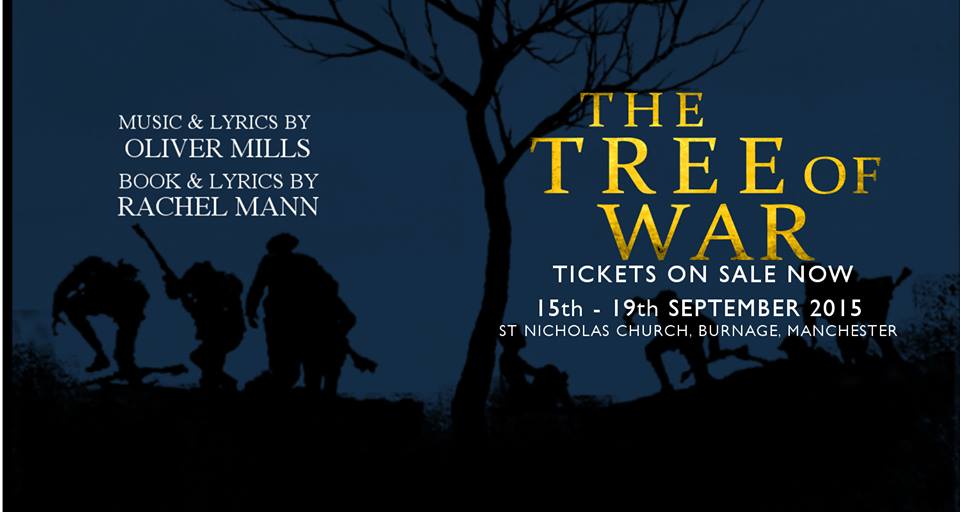