Liverpool Network Theatre are well into rehearsals for their upcoming summer production of William Shakespeare’s Julius Caesar which is to be staged at a number of venues in and around the city. From its first known performance in September 1599, Julius Caesar has been one of Shakespeare’s more popular plays and I was keen to catch up with director Sean Gaffney to understand what had drawn him to taking on what is very much a ‘company’ play.

Gaff notes his starting point was the full title of the play: ‘The Tragedy of Julius Caesar’. But just what is the tragedy? Is it the death of Caesar? Caesar is portrayed in the play as a ruthless and ambitious dictator who aims to destroy the democracy of Rome. Or is the deaths of Brutus and Cassius, who claim to only be concerned with Rome yet end up organising and implementing a brutal assassination which leads to civil war?

In fact, Gaff elaborates, it is the destruction of the Roman Republic which is perhaps the true tragedy as the consequence of the actions taken by all the characters lead directly to Octavius crowning himself Emperor Augustus Caesar, and what irony that those who sought to save Rome from such a thing inadvertently caused its downfall. 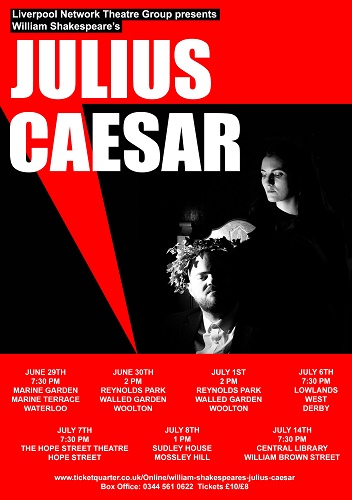 OK, so much for the history lesson but what is the appeal and interest for the modern audience? Gaff continues: the conspirators led by Brutus and Cassius want to keep Rome as it is with the Senate in charge whereas Caesar and subsequently Mark Antony aim to improve the glory of Rome and are content manipulating the citizens to achieve their objective. Turn the clock forward some two thousand plus years and you have direct parallels in the two most significant recent national and international political events: Brexit and the election of Donald Trump.

The Leave contingent in Brexit and the electoral machine behind Donald Trump both used techniques which can be seen in use by Caesar and then by Mark Antony: there is the disingenuous direct appeal to the people; the disdain for the existing power structure; the appeal to restore lost glories. ‘Take back control’ or ‘Make America great again’ could both be rallying cries Caesar or Mark Antony comfortably employ.

The attitude and behaviour of the conspirators, particularly Brutus, likewise reflects many of the actions shown by the Remain campaigners as well as by the Hilary Clinton campaign machine, especially the ‘we know best’ approach. Both Remain and Clinton refused to believe that anything other than their message was the one that the populace wanted – just as we see with Brutus’ speech about the danger of Caesar.

Gaff has chosen to set the play in a modern context with technology and social media reflecting the auguries and portents of the original. In a further step he has opted for a gender-neutral approach which adds a further dynamic to this piece of socially relevant theatre examining some of the main political issues of the day.

Tickets are priced at £10 (Concessions £8.00) and are available from www.ticketquarter.co.uk/Online/william-shakespeares-julius-caesar or Box Office: 0344 561 0622