Around the world…..on one stage

When Around the World in 80 Days won the Best Picture Oscar in 1957 it was filmed in 13 different countries on countless locations and now Leeds Playhouse is taking on this epic tale of derring-do on just one stage.

Four of their acting ensemble – Joe Alessi, Robert Pickavance, Dan Parr, Darren Kuppan – will step onto the Playhouse’s temporary pop up stage to tell Jules Verne’s epic tale of gentleman inventor and Phileas Fogg and his faithful sidekick Passepartout setting off to prove to Victorian Britain they can get round the world in just 80 days. Experienced sound designer and composer Dom Coyote will provide the music for this frenetic dash round the globe adapted by Toby Hulse from Verne’s novel.

“It is definitely a story people will be familiar with, but it is also totally its own thing,” says Dom. “It’s a very playful send up of the original, so it is absolutely Around the World in 80 Days that people will know, but it has its own character. It has a new script, the actors have really good comedic timing and they are very funny as a group. 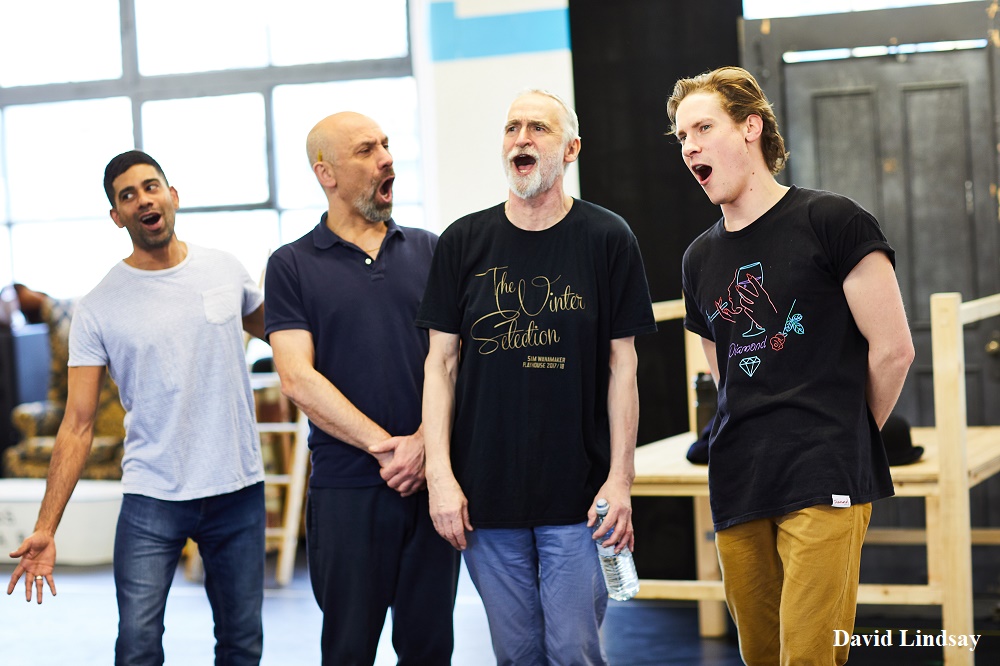 “One of the ways I can help is with sound so there are lots of soundscapes of different places. So when they go to Bombay it really feels like they are in a big bustling market in the middle of an Indian City. The same when they get to the Suez Canal, there is a sense of industry happening as it set when the canal is being built, so you get a feeling of them being on these busy docks that are under construction.

“You get a sense of the places which is how I do it, and that’s the beauty of theatre because you describe where you are, people go with you, and you can be absolutely anywhere at the drop of a hat. I think the audience will go along with it as it is very playful, very silly and it is a real rip roaring ride.”

Dom’s work will be familiar to Playhouse audiences as he composed the score for the challenging version of Tin Drum that the theatre co-produced with theatrical provocateurs Kneehigh. Typically he hasn’t gone for an easy solution for this global jaunt.

“Musically I had an idea very early on that I wanted to write it for strings so it is all written for cello,” notes Dom. “I’ve just been in my studio in Bristol, I’ve had the cellist in, and we are working on recording all the parts.

“It feels very cinematic and a lot of the time in theatre people don’t do that. I think with recorded scores you get lots of electronic strings, and you often don’t get the real production values of a strong string player.

“It’s epic, and needs to feel that, but it’s a comedy too, and both of those things work very well with strings. It also gives it a sense of time so it feels quite old fashioned, so harps back to the films, and also the feel of the 1870s where it is set. The other thing that is happening musically is the company are singing a series of parlour and music hall songs in acapella harmony, topping and tailing the performance, which really gives you a sense of not just place, but time.”

Dom is currently popping in and out rehearsals to check with director Alex Ferris that the music is working, and where it needs tweaking heads back to Bristol to create new soundscapes. One of the challenges for any composer is to create a score that adds to the work, but doesn’t overwhelm it, or - worse still - jars with what is happening onstage.

“A big influence on me were the soundtracks to the Indiana Jones movies which are absolutely incredible. They are done with big orchestras, and sound so great, but they are just helping the action along.

“A lot of time what you are doing is supporting the emotion of the piece. A few people might realise the music has been a big part of it, but it can be invisible which is no bad thing. The audience might not know what they are loving, but they are because of the combined efforts of artists.”