Manor Operatic have done it again! This so called “amateur” group have once again proved that there is no division between amateur and professional productions and turned Sheffield’s City Hall into a big top to house the greatest show on earth! I would defy anybody to walk away from this show without a smile on their face as wide as the stage or even the tightrope negotiated by the superb James Smith as Barnum at the end of act 1.

In the middle of the 19th century, Phineas Taylor (PT) Barnum introduces his circus acts as he stands in front of a tent, proclaiming "There Is a Sucker Born Ev'ry Minute". He loves spectacle and excitement, using hype and "humbug" to promote his exhibits. His wife Charity disagrees with his use of "humbug" but loves him and aims to keep him grounded. Barnum then introduces the oldest woman alive, Joice Heth. His wife Charity ("Chairy") urges him to get a job in a factory, but Barnum refuses. He enlists clowns to help in building a museum to house his attractions. His star attraction, Tom Thumb, appears to advise that "Bigger Isn't Better". Barnum then becomes manager of the famous Swedish opera singer Jenny Lind. Barnum becomes enamoured of her and sees the attraction of going on tour with her. He accompanies Jenny on tour, leaving Charity behind. 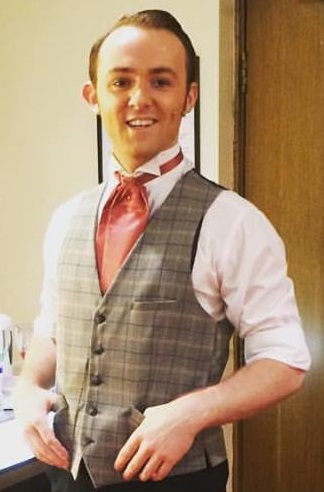 Although all seems to be going well for Barnum, he finds that without Charity in his life he is miserable, and he decides to break ties with Jenny and return home to the woman he loves. Upon his return to Charity, he promises to live the more sedate life she desires for him, in "Black and White." When his political campaign looks doomed to fail due to lack of interest, Charity realises how important his talents and passion are in his life, and allows him to inject colour and life into his campaign. The two of them recognise the value in each other's approach to life and how they complement one another. But his beloved Charity dies suddenly, leaving Barnum bereft and alone. When Barnum finds himself humbugged by his political party, he laments his position and wishes to "shine a light in a dark world". James Anthony Bailey arrives and offers him the chance to "Join the Circus". Initially resisting he relents and joins Bailey, and they form the famous circus Barnum and Bailey.

As mentioned above James Smith is superb in the role of Barnum and is the glue that sticks this slick production together, rarely off the stage he showcases a myriad of circus skills any professional would be proud to have in their repertoire. From juggling to tight-rope walking to his spectacular entrance at the end of the show Smith really is the ultimate showman.

But it is not just Smith who is in this show, he is supported by a very strong cast whom all shine throughout. Emma Holmes as Mrs Barnum is sublime and elegant in her portrayal and the chemistry between her and Smith is a joy to watch. Simon Hance as the Ringmaster and later Mr Bailey provides confident narration to the show and Natasha Simpson as Jenny Lind excels in this difficult vocal role singing ‘Love Makes Such Fools Of Us All’ beautifully and exquisitely well controlled.

Barnum’s ‘attractions’ also shine with Emily McGeoch playing 161 year old Joice Heth, who in real life only lived for 80 years. McGeoch’s mannerisms were spot on of how you’d expect a lady of such an age to sing and dance. Liam Gordon as General Tom Thumb was vocally strong as he performed in one of the stand-out numbers of the first half which included stilt walking and Jumbo – the world’s biggest elephant. Bethan Griffiths also shone as the blues singer.

I should also congratulate Chris Bostock, Lorian Biet and Craig Turner who provided some absolutely mesmerising acrobatic routines during the evening and brought that extra ‘WOW’ factor to the night.

My only slight gripe in what was a superbly staged production throughout was the ‘Black and White’ number. There was far too much use of the colourfully costumed ensemble prior to the moment Charity allowed Barnum to bring more colour into his campaign, and as a result lost a bit of the impact of the decision. Sometimes less is more and the explosion of these ensemble onto the stage at that point would have given the song more impact. A small critic perhaps but when a show is this good the smallest things stand out.

Along with those on stage Andy Collis led a sizable band who played the score from Cy Coleman to perfection. Lighting from Limelight Presentation Systems Ltd ensured the massive stage at City Hall remained bathed in a sea of colour throughout the performance.

Finally Richard Bradford and Linda Kelly as the driving force behind this and every production Manor produce are visionaries. I have been fortunate to see three of their productions to date including the biggest ever production of Ghost The Musical last year at this venue. Their desire and passion to produce the very best of amateur theatre on a professional scale can only be applauded from the highest level. I cannot wait to see their next production of Jack And The Beanstalk this Christmas in what will once again be the biggest amateur pantomime produced in the country.

Barnum at Sheffield City Hall is probably the biggest production of this musical ever performed in the UK on any level, from the sizeable cast to the huge stage everything about it says circus. I am sure the real Phineas Taylor Barnum would sit back and be amazed by this production. The show is an utter triumph and a festival of colour that leaves you with a warm glow within as you leave the theatre.

Barnum continues at City Hall in Sheffield until the 14th May and you can snap up the last remaining tickets via http://www.manoroperatic.com/

You’d be a sucker to miss this spectacular production.