One of the greatest things about reviewing for North West End is that not only do you get to see such a huge diversity of productions, you also go from high profile West End transfers to mainstream educational establishments to watch their own schools' productions, which is where I found myself last night. I ventured into the wilds of north Manchester to the town of Heywood and to the Holy Family RC and CE High School to see their production of the much-loved and often-performed Musical, Grease.

For those of you who know only the film, starring John Travolta and Olivia Newton-John, then you are probably in for a few surprises here. The stage version is really quite different in several regards; most notably that in the stage show the cast start by singing their School Song which is then parodied by the T-Birds, and one of the most famous songs from the show, Greased Lightnin', is sung by Kenickie. [In fact, John Travolta only agreed to play the part of Danny if the script was rewritten for him to sing this song! The power of fame!]

Moreover, last night saw some very interesting and unusual characterisations. I mean this as a positive. I have always said that you should play to your strengths, and this is something that director, Miss Thomas, obviously is in accord with. Very sensibly not trying to make carbon copies of the hackneyed caricatures in the film and present us with fresh and appropriate ones which the students could not only relate to but could perform without feeling uncomfortable doing so. Whether it was intentional or not, the two T-Bird and Pink Lady love-pairings using the shortest with the largest was comedy gold! Also, even after seeing more productions of this Musical than I can even remember, there was still a surprise in store for me. The throwing of Roger's underpants onto stage and his subsequent 'bottomless' awkward walk across the stage was simply inspired! - I'm nicking that idea for the next time I direct it!

This was a school production, and as such, a rather rough-around-the-edges production is to be expected, but I have to give full credit to all involved for coping so well with what was actually the worst and most pointless stage I have ever seen in my life! To put this is some perspective, this is a newly-built school, with what looks like a purpose-built auditorium with raised seating and professional lighting rig, but the stage has been reduced in size and now looks like a television. The apron front is much longer than the actual stage, and although it is quite deep, is less than useless due to its lack of height, and incongruous lamps sitting dangerously close to the pupils' heads. I have no idea what the architects were thinking when they built that, but it really needs hollowing out completely and making it the same size as the apron. 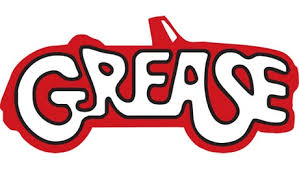 Very wisely then, majority of the action took place on said apron front and on the forestage.

This was the first night, and those stomach-butterflies were evident at the beginning of the show, as it took a little time to warm up. However, once the cast got into their stride and realised that they could actually perform to an audience and that the audience were with them, they improved to a man. I was actually quite impressed by the number of boys who took part. Proving also that they were not afraid of dancing and singing. Well done to you all. In fact all your hard work paid off and the commitment you all showed on stage last night was most gratifying. Some lovely singers, especially Letitia Da Silva as Cha-Cha, and Russell Mansfield as Doody. {although why he was given such a ridiculous ukelele-banjo and not a real guitar I can't imagine!}, and the surprisingly different and acrobatic performance of Edrine Spencer as Kenickie was refreshing and humorous. And the inimitable characterisation of Roger, played by Jack Quinn was immensely likeable, and quite unique!

And of course, I couldn't write the review without mentioning the two obvious stars of the show, Liam Selby as Danny as Caitlin O'Connor as Sandy. Both did extremely well; acting, singing and dancing their way through the show. More could have been made of their changes at the end though. Neither looked either surprised or happy to see the other dressed to please, and so that moment of happiness and realisation was lost. Both did however, look very much the parts! In fact, the costumes in general were very good. I appreciated Danny's drainpipe jeans and jogging pants. Very authentic.

For a school production the band was quite large, and they made a lovely sound too. Although I suspect they were teachers rather than pupils! They were conducted by the Musical Director, Mrs. Holden, who did a good job with all the songs.

The biggest problem with last night was the microphones. Hopefully a solution can be found for subsequent performances, but the radio mics were playing-up; sometimes coming through the left speaker only and sometimes through the right. Sometimes not working at all. The dialogue was quiet without them, but the cast also were playing with them too much on stage and they fell out a few times. This was rather disappointing considering how well everything else went.

All things considered however, this was a very enjoyable show. Well done indeed to all involved!