'There Goes The Bride' is a farce written by Ray Cooney and John Chapman, involving much hilarity and mayhem as the bride's father succeeds in throwing his daughter's wedding day into total disarray and havoc after suffering several bumps on the head which bring about some bizarre behaviour.   Add into the mix a 1920s flapper, an overwrought bride and an elusive kitten and you have the recipe for a whole combination of mix-ups, confusion and some laugh out loud moments.

All the cast were excellent but I must give a special mention to Tom Dawson who plays Dr Gerald Drimmond.  I understand that this is Tom's first role with the Players Theatre and what a fabulous one to start with.   He is perfectly cast as the slightly bumbling grandfather of the bride whose constant misunderstanding of every situation is hilarious.   He is completely natural, has great stage presence and his timing and delivery are spot on.  He does have some fabulouslines and he totally does them justice.

ChrisJorgensson as the father of the bride, Timothy Westerby, has the most challenging role.   His character goes through several transformations, each of which he executes perfectly and the change is well delineated.  Not only does Chris have to get undressed on stagebut he also has to sing and dance too – so not a role for the faint hearted but he tackles it head on and does a fantastic job. I found myself getting quite stressed with him as initially, his character is frenetic, agitated and highly strungand he played this very well indeed. 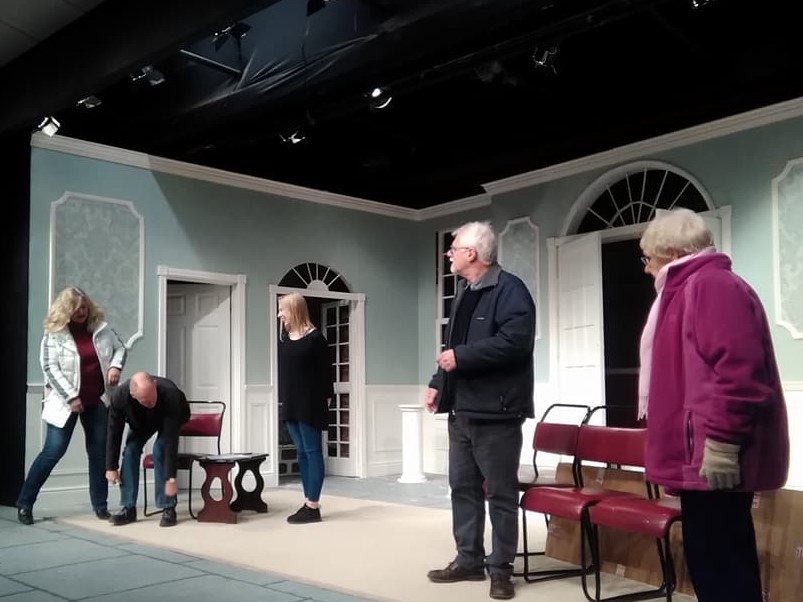 Much hilarity ensues when Polly puts in an appearance – no spoilers here so you'll just have to go and see it to find out who she is – and her effect on Timothy is swift and encompassing.  As soon as she arrives, we are thrown into full blown farce.

Timothy's business partner, Bill is played by Ian Tyler who has a face just made for farce.  His eyebrows deserve an award of their own!   I loved his bewilderment at the ludicrous events unfolding before him and his ability to adapt very quickly.

I lovedthe interaction between Ursula (Anne Wint) and her parents, Gerald and Daphne (Margaret Williams).  Gerald and Daphne have some great lines and I loved the scenes with either or both of them in. I could actually believe that they were family, such was the easiness of the relationship between them.

Poor Ursula has to cope with a deranged husband and a hysterical daughter while trying to maintain normality in front of the groom's father.   Anne plays the world-weary Ursula marvellously and she too has some fantastic lines which she delivers with maximum effect ("Genghis Can't" being one of them that got the loudest laughs of the evening!).   Anne also designed the set and is responsible for the choreography – does this lady ever sleep?!

I did like the way that the character of Charles Babcock (Peter Thorburn) became the stooge for the farce in the second half.   As a gruff 'Ozzy', his increasingly dazed confusion was very funny.

I've never been in an audience where the set received a round of applause before any of the actors had even set foot on the stage – so tonight was a first!  Mind you, it isextremely sumptuous and impressive and the applause was well deserved.   Congratulations to Anne and the Players Set Building Team – what an amazing set you have created.

The entire cast did a fantastic job tonight and if you are going to see the play, you are in for a treat.  The script is packed full of innuendo, gentle comedy, really funny one liners and of course, a huge amount of farce, which if not in the right hands, can become a bit tedious and lose the audience if not donewell.  It is in safe hands with The Players who have produced yet another wonderful evening of entertainment which I'm still chuckling about.