Fans of nostalgic childhood tales with be delighted with this contemporary retelling of Arthur Ransome’s classic novel, adapted by Helen Edmundson and co-directed by Damian Cruden and John R. Wilkinson. The show aims to take you back to your summer holidays, and provides lots of enchanting music too!

Set in 1929, the story follows the adventures of several young children who spend their summer holidays visiting relatives in the Lake District, and form themselves into rival gangs: siblings John (Alex Wingfield), Susan (Laura Soper), Titty (Hanna Khogali), and Roger (William Pennington) are the Swallows, and Nancy (Anne-Marie Piazza) and Peggy (Rachel Hammond) are the Amazons. Youthful high jinks ensue, including an incident with Uncle Jim’s (Kieran Buckeridge) boat and something to do with charcoal burners. 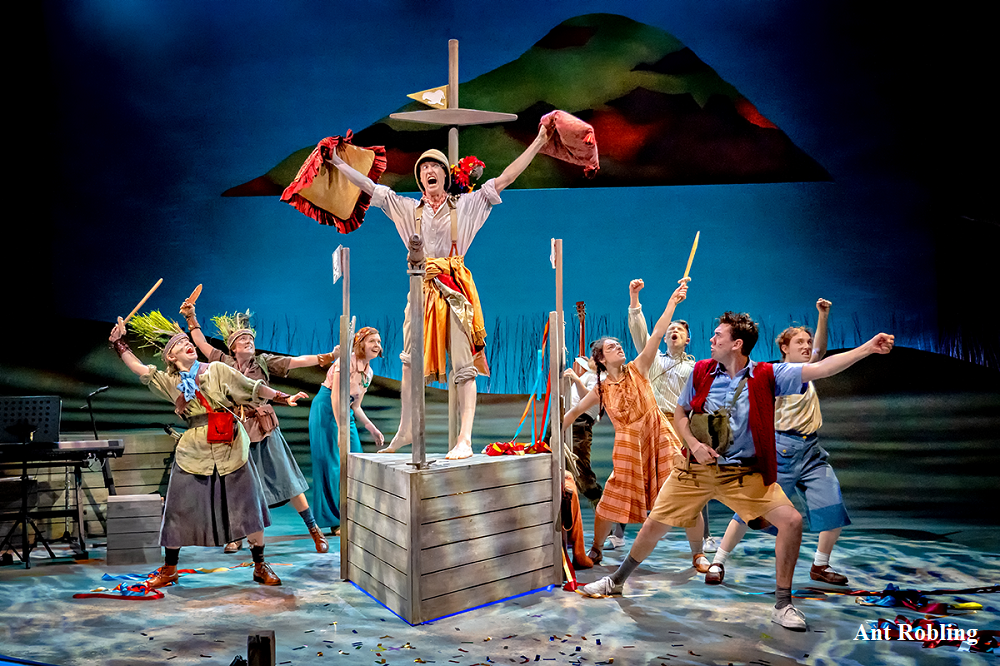 I will gladly hold my hands up and say that I am not a fan of the story (such as it is) and other theatrical adaptations have not changed my mind. Not wishing to be prejudiced, I approached the production in the mood to be convinced by the story’s celebrated charm and whimsy. Unfortunately, the plot is as threadbare as ever, and no amount of musical talent or superlative performances can get around that basic fact.

For those who have not seen it, it’s no spoiler to reveal that Ransome didn’t bother to include much of a plot in the story: stuff just happens, the kids muck about outside (in a good old fashioned unsupervised way, where they are allowed to sail across lakes at night, speak with total strangers in the woods, let off fireworks with impunity, and come through all manner of eyebrow-raising activities miraculously unscathed), and then everyone goes home for tea. Imagine C.S. Lewis’s The Lion, the Witch and the Wardrobe if the kids never discovered Narnia and instead played in the garden. That’s Swallows and Amazons.

However, that being said, the musical expertise of the company is outstanding. Alex Wingfield (John, Captain of the Swallow), moves swiftly between actor, clarinet player, and saxophonist, portraying John as the playful sensible one. While Anne-Marie Piazza (Nancy, Captain of the Amazon) is much loud and brash, with a wonderful singing voice to match! While Laura Soper (Susan, First Mate of the Swallows) adds a gentler touch and sings with a purer angelic tone. The musical skill is to be not only enjoyed, but admired also.

Furthermore, it is the musical instruments which dominate the stage and its design. Rather surprisingly, in all other aspects the set design is somewhat minimal. Whether this is to encourage the audience’s use of imaginative play, I am not sure. However, despite an impressive water feature in the stage, it would have been nice to see more colourful, and nature inspired aspects to the design too, for example, birds could be heard in the auditorium, but no birds, or nesting foliage for them seen. Furthermore, the use of lighting and costume is inventive but it never feels like the stage has been transformed into the various locales described, as it has done with similar productions at this theatre (but, in fairness, how many different ways can you light water and woods?).

All of this being said, unfortunately Swallows and Amazons charms are probably lost on a younger generation (20-30 years young). The number of audience members over 50 outnumbered those under 25 by a ratio of five to one. It seems like Ransome is most appreciated not by children but by older people reminiscing about their own childhoods, or as they imagine their childhoods could have been, in the days before health and safety and technology and motor vehicles and all kinds of horrible things conspired to puncture the cosy bubble of 1930s suburbia.

Those young people who did enjoy themselves seemed happiest when the story had evaporated completely, and the characters performed a bit of impromptu singing. The musical aspects are certainly the highpoint of the production, and it’s no surprise that the songs were composed by The Divine Comedy’s Neil Hannon. The narrative is in many ways simply a peg on which to hang these rather soulful tunes, and to that extent it works fairly well. Indeed, it was for this reason that the production managed to be an enjoyable experience and might have broader appeal.

In sum, Swallows and Amazons is exactly what it says on the tin. If you know the story, then you will know if you like it or not. If you’re new to the material and want to give it a chance, then there’s much going on here that might spark you interest. Or you may wonder what all the fuss was about. https://www.yorktheatreroyal.co.uk/show/swallows-and-amazons/