Let me get the negative stuff out of the way first – I was never a fan of David Bowie or his music. I had nothing against him; he just didn’t appeal.

However, after spending a fascinating night at Hull Truck Theatre, on Thursday, being enthralled by Turn & Face The Strange – The Story of Mick Ronson: The Spider From Hull, I can definitely say I am now a HUGE fan of the late rock guitarist, Hull-born and bred Ronson.

His life story was played out at this very popular local theatre, using a backdrop of photos, fantastic artwork (Cecille Piverotto take a bow), short films, voices from faceless friends, neighbours and family, as well as interviews with the man himself.

Written and produced by Garry Burnett and Rupert Creed, it was they who provided much of the narration as they stood either side of the stage.

Of course, music played the most important role in this event, and the on-stage musicians varied from classical to rock. 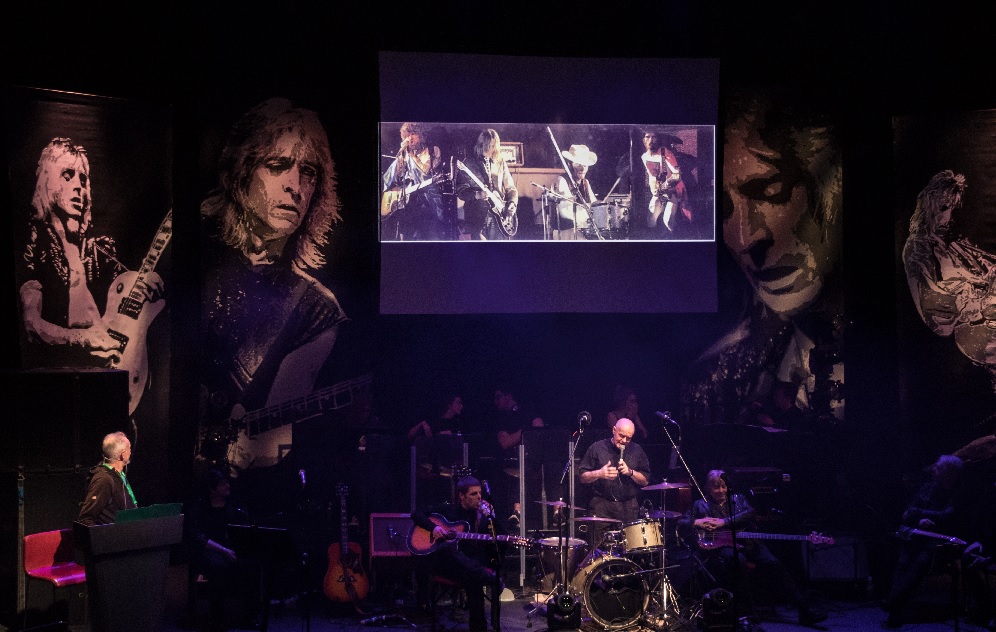 The classical four – Grace Burnett on clarinet, Bethany Nicholson, cello, Emily Tomlinson, violin and Nathan Lynch on viola – played beautifully as we in the audience took our seats.

The show began in earnest as the rest of the talented musicians and singers strolled on to the stage. Vocals came from Kristian Eastwood, Rachael Jarvis and Bobby Joyce, who also played the guitar.

But the icing on the cake would have to be the actual musicians who played alongside Ronson and Bowie – Keith “Ched” Cheesman on lead guitar, John Cambridge on drums and John Bentley on bass guitar. They may have been much older and maybe wiser, but boy, they still have what it takes to rock a venue.

Last but certainly not least was Phil Keech on keyboards.

Funnily enough, although the stage was expertly designed and lit to look like we were in for a rock concert, for me, the music took a back seat, as I was absolutely enchanted by what I was seeing on the huge backdrop screens and what I was hearing from the narrators and contributors who knew Ronson, including his sister Maggi.

I could have sat and listened all night – come to think I did; the show started at 7.30pm and after a short interval we were still there gone 10.30pm.

Born in 1946 and dying, aged 46 from liver cancer, in 1993 – what Ronson achieved in between was simply amazing. And from what I heard on the night, he remained the same down-to-earth, kind, generous, friendly lad who used to serve groceries from the back of a Co-Op van, later tending to the city’s gardens while working for the council.

We learned he could read and write music from an early age, paying older lads to carry his violin case to and from school in East Hull, so he wouldn’t be picked on for being into classical music.

Years later, after being disillusioned with Bowie, instead of following him up the motorway from London to a gig in Leeds, Ronson saw the sign for Hull – so, feeling homesick, promptly “forked off” back home.

Thursday night started in earnest with Kristian Eastwood belting out Life’s A River, a song I didn’t know. However, the more well-known (to me anyway) hits such as Jean Genie, Starman and All The Young Dudes were great to sing along to – the latter ending the night, accompanied by energetic young dancers from Hull College, who strutted their stuff à la Top of the Pops of years gone by.

As the show progressed, we learned Ronson had been responsible for piano and arrangements on Lou Reed’s Perfect Day and that he arranged John Mellencamp’s hit, Jack & Diane. Man of many talents or what!

Cheesman, Cambridge and Bentley, as well as performing musically, all took it in turns to regale us with insights into their friendships with Ronson and it’s clear they all still think the world of him.

Knowing what I know now, him dying at the relatively young age of 46, was not only a tragedy to his loving family, but also a huge loss to the world of music.

This lovely man was much, much more than his well-documented association with Bowie. After all, it’s his story, not Bowie’s, that’s filling theatres 25 years after his death.