Most babies aren’t the size of a double decker bus but then most new parents don’t have to overcome the obstacles faced by its mother Zara.

Zara has a learning disability and it is estimated that those parents have a staggering 90% chance of having their child removed from them. This incredibly life like gargantuan baby, brilliantly created by Francis Morgan complete with spooky opening eyes, is an outsized metaphor for the herculean task new mum Zara faces fighting back against the system coming for her baby.

She is aided in her task by her foster mum and placard waving supporters outside the maternity ward standing alongside her as she takes on the state represented by a well-meaning social worker who isn’t really listening to Zara. At one point the army gets involved deploying a tank that motors into this historic market place created by Halifax’s wool merchants. 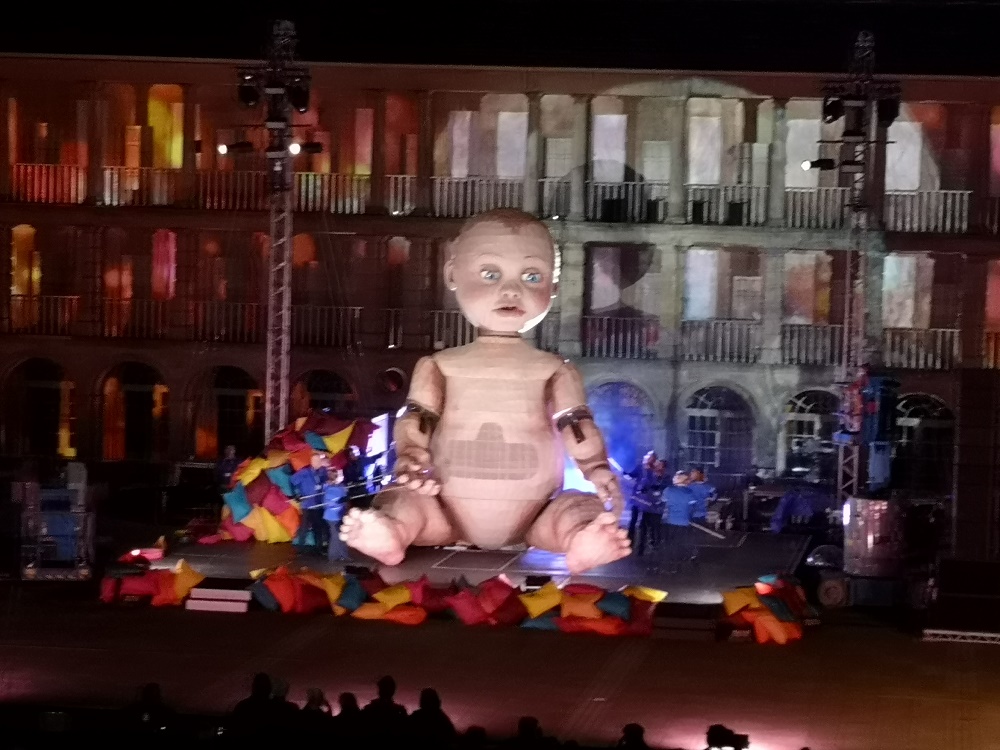 Zara is the final part of the Daughters of Fortune trilogy created by Mind the Gap who develop the skills of learning disabled creatives, but it’s a huge step up for them in terms of scale, so they wisely partnered with Walk the Plank who are internationally renowned outdoor events specialists.

It is a partnership that on the whole works as Zara – sympathetically played by rising star JoAnne Haines who is herself adopted - whizzs around her giant baby in a cherry picker as she tries to understand the demands of being a single mum, as well as having to battle a system she doesn’t really understand.

Make no mistake this is an epic piece with that tank, a community cast of 100 actors, and a big choir singing from one of the Piece Hall’s balconies adding real texture to the action in this huge quadrangle, as does Sarah Llewellyn’s pounding score that helps fill the space. Her witty song for the explosive ‘poo-magedon’ is worth the ticket price alone.

After 27 years in the game Walk the Plank know what they are doing with hardly a stumble despite the complexity of the piece that also includes live action reportage projected onto huge screens, and full marks to the crew who skilfully animate the baby as she sits up and moves around in an eerily lifelike fashion.

Walk the Plank have brought in top class collaborators, including projection maestros Illuminos who project images onto the white walls of the Piece Hall, and create a moving psychedelic sequence playing across the baby’s body where learning disabled parents talk about their experiences, including a gut wrenching moment where a mother says ‘I didn’t even get to say goodbye.’

As is often the case in busy outdoor spectaculars at times the subtly of the narrative inspired by a true story does a get little lost in all the sound and fury. Despite that you can’t help but come away thinking that if we as a society spent as much effort supporting learning disabled parents instead of working so hard to remove their kids our nation would be a much more civilised place.

Zara moves onto Geraldine Mary Harmsworth Park – home of the IVM London – on 10th and 11th May. To book go to www.mind-the-gap.org.uk